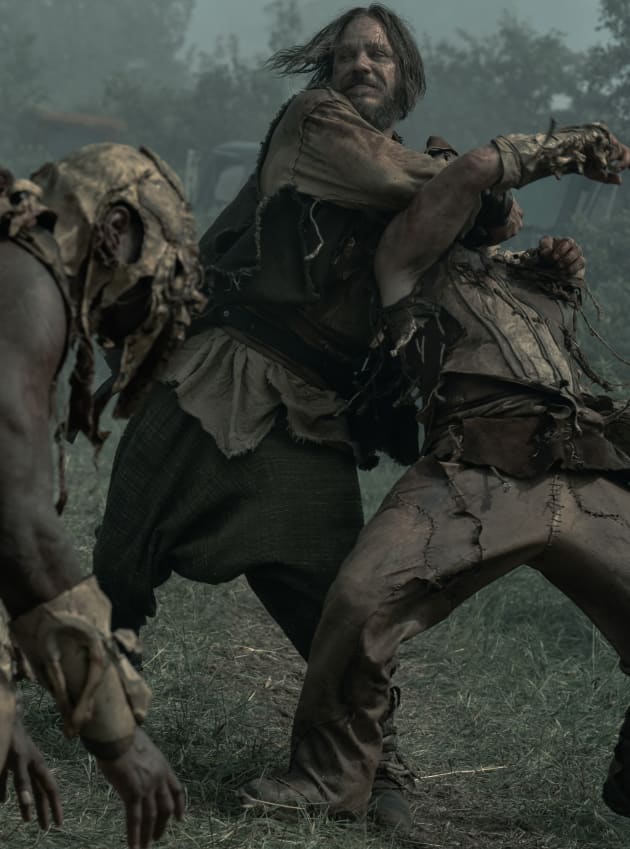 This was one fantastic episode. A bit sad, sure, but fantastic.

See Season 3 Episode 6 continues with the story, picking up from Pennsa where Maghra and Tamacti Jun are. What follows is a series of complications, cannibalism, murder, and death.

In this episode, new alliances are formed by unlikely allies, weakening Pennsa’s position in the coming war.

For Maghra, the witch-finders are her most immediate problem. Their every move keeps on complicating her plans. With the members of her council dead, it leaves her exposed as a leader.

Even more, she has been weakened in the coming war as she counted on them offering their wealth and soldiers to fight.

She keeps on learning and thus understands why Sibeth is as ruthless as she is. Sibeth learned earlier that the only way to deal with people who have convinced themselves that they have a god-given mission is to play by their rules.

This is the point where Maghra learns that she needs to get her hands dirty. By dirt and blood.

Maghra: You said the council had already assembled?
Tamacti Jun: It has.
Maghra: Then why don’t I hear them?

The Bank and The Scientist are two very dangerous people. Individually they are bad. The Bank is drunk with power. She needs to wield it for as long as it is humanly possible. She wants to be calling the shots.

She has the support of another madman who derives pleasure from making people suffer while guising it as science and development. Good science is supposed to minimize, if not end, suffering. Them both together is a dangerous combination.

In this episode, even with all the chaos surrounding them, Baba and Kofun give us a sneak peek of what lies ahead for Kofun.

Like Baba says, Kofun has all the qualities needed by a leader so that he doesn’t end up a tyrant. I, however, am not convinced that he can make a good leader. Maybe he could make it if the circumstances and the world around them were different.

Baba Voss: … What I do know, is that you are your mother’s son. You have had her compassion and wisdom from a young age. I know you think that that makes you soft. That makes you strong. Like your mother, you will make a great king
Kofun: What? What are you talking about? I wouldn’t be king.
Baba Voss: Spoken like a true king.

Kofun and Haniwa needed to talk because some things hurt more when kept inside. They are both able to explain their sides, and even though they don’t get to agree, it’s out there.

Being sensitive and compassionate are the same qualities that his mother has. Look where this has gotten her.

The writing in this episode is something that stuck out to me. They manage to keep the danger that lies ahead a mystery long enough for it to be a surprise for the viewer. I found myself trying to guess what could be so dangerous about this route, and I wasn’t close to what they came up with.

And then, enjoy some action.

God, I hope they keep Sibeth around long enough. Despite being the show’s worst character, she is so bad it’s good.

Her waylaying Tormada is in line with her persona. She couldn’t kill him because she needed him to detonate the bombs. He could be a great ally for her.

Maghra gets down to business in her hunt for the witchfinders. I don’t remember whether she had ever had to fight before this was her fast time, but it surprised me just how agile she was with her weapon.

The scene with Shiloh is a pivotal one, especially for Tamacti Jun. He had dedicated his life to this cause. He was lucky that he saw the light; not everyone was as fortunate as he was. As Shiloh lies on the ground, injured and beaten, Tamacti sees what fate could have easily befallen him.

Shiloh: Tamacti Jun, give me my honor. Finish me.
Tamacti Jun: Death must be earned, Shiloh. Trust me, I know.
Shiloh: Kill me. KILL MEEE!

On the one hand, I admire Lucien for his beliefs and what he is willing to do to defend them. On the other hand, he is wrong in his beliefs. When he hears the conversation between Sibeth and Tormada, he realizes this is not what he had signed up for.

But even without this realization, his days had expired. While reviewing See Season 3 Episode 5, I had predicted doom for him. He dared question Sibeth; if there are anything tyrants like her dislike, it’s being questioned.

If we thought Tormada and The Bank were an insane duo, Sibeth and Tormada are an explosive one, no pun intended. Even from that short interaction that they have had, they can gauge each other, and without saying a word, they decide that Lucien can’t be trusted.

Rarely does Baba Voss meet his match. In most of the battles we have seen him in, he obliterates these people. The way he kills them makes him seem like a god. When he goes to rescue Haniwa and Harlan in the cannibals’ den, that fight was something I enjoyed seeing play out.

The scene shows that even with his prowess as a warrior, there are simply some problems too big for him.

Harlan’s death was heartbreaking. His impact was much more significant than he was given credit for. Even though he did some things — like marrying Maghra — purely out of self-preservation, deep down, he was a good man. He could have easily left her to die.

If anyone will feel the loss, it is Maghra. This man saved her and her family.

The motivation behind Sibeth joining the Trivantians against Paya is that she has justified that this is a holy war for her. She is forging her crown at this moment. She is fighting for her birthright.

I never had to fight for my crown. I was born into the monarchy. A queen ordained by god. I wore the crown, but it always felt a little … light — to me. But now, the crown will be forged in the burning flames of war. And I will be a queen reborn. Anointed by the blood of my enemies.

As Kofun heads for Pennsa, he is attacked. Who do you think did it?

The Trivantians could have taken him to hold him hostage, the witch-finders too, maybe another community of cannibals. It’s not impossible that Sibeth herself took him.

Let us know in the comments.

New episodes of See stream every Friday on Apple TV+