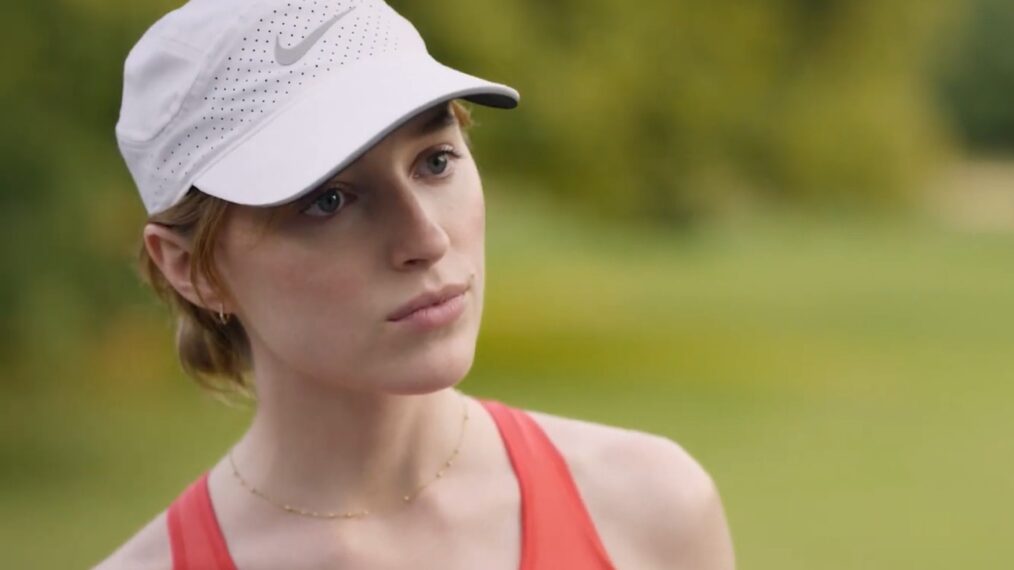 Sundance Now and AMC+‘s Ten Percent is crossing paths with Bridgerton in the show’s fifth episode, arriving Friday, May 20 as star Phoebe Dynevor steps in to guest star as herself, and we have your exclusive first look.

The series based on the French hit Call My Agent!, follows the team behind London’s small talent agency Nightingale Hart, and agent Rebecca (Lydia Leonard) thinks she has a foolproof way to win over Phoebe. In a sneak peek clip above, waiting behind a tree, Rebecca stalks her metaphorical prey, an unwitting Phoebe who is running through the park. Just as Phoebe goes to pass her, Rebecca begins running alongside her, but just as she’s about to say something, she runs head-first into a tree. The scene then shifts to Rebecca sitting on a park bench with bandages around her bloodied nose.

Thanking Phoebe for calling an ambulance, she cuts to the chase. “Do you believe in fate?” Rebecca says, beginning her pitch. Phoebe doesn’t exactly follow, but Rebecca continues on with her spiel, adding, “I feel like this is a sign.”

Proceeding, she adds, “I’m not sure how to put this, but I’m actually an agent.” The statement perplexes Phoebe who asks Rebecca, “what, like a secret agent?” She begins to catch on though when Rebecca clarifies that she’s “an agent agent.”

“Wait, sorry, were you following me?” Phoebe asks with an accusatory tone. Find out how Rebecca proceeds knowing that she’s been caught, and tune into Ten Percent when Episode 5 drops on AMC+ and Sundance Now this Friday.