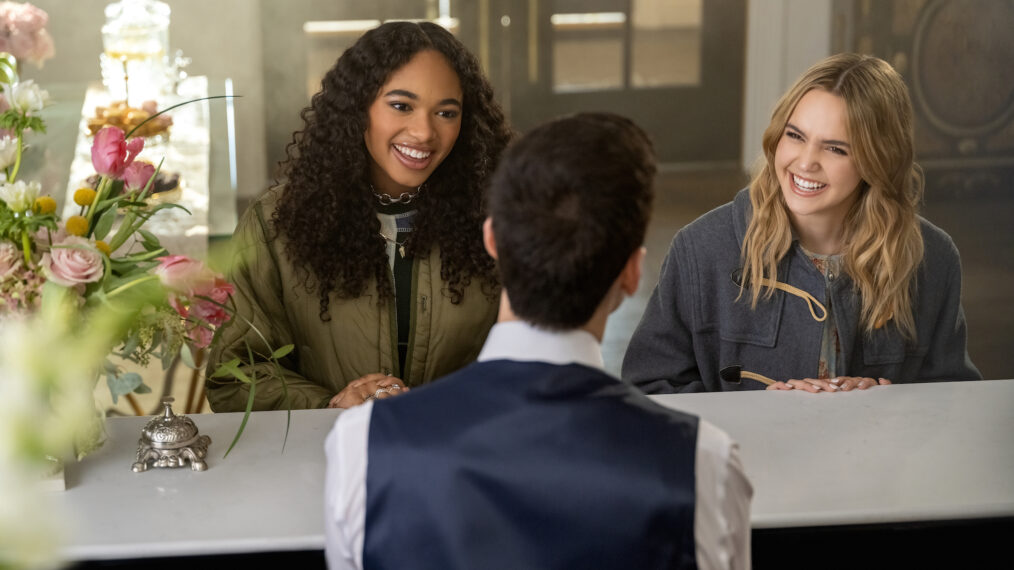 The latest two episodes of Pretty Little Liars: Original Sin feature a major connection to the original series — and reveal that apparently, Riverdale is part of this universe!

Imogen (Bailee Madison) and Tabby’s (Chandler Kinney) investigation into what happened to Angela Waters in 1999 takes them on a road trip to Rosewood (!) and what was once Radley Sanitarium (but is now a hotel). Angela’s mother, Rose, spent time at Radley, and it’s Eddie Lamb (!) who provides the new Liars with a couple major pieces of information: Angela was raped, and six people visited Rose using her daughter’s name. The Liars’ moms are five of them, but who’s the sixth? Also while in Rosewood, Tabby checks out the town, specifically Ezra’s Books!

With the Pretty Little Liars references, “we really came at everything from a story point, especially with Episode 6. Knowing that we wanted to go to Rosewood, that we wanted to remember our roots for the show, the setting that made the most sense to us story-wise was the Radley, following the line of what happened to the character Rose Waters, where did she end up, how could we connect that to the show, and how could Imogen and Tabby get real information, just riding that train,” creator Lindsay Calhoon Bring tells TV Insider.

“We showed up right at the Radley, so once we knew that was our big set piece for Rosewood, then it became about the fun Easter eggs,” she continues. “If Tabby’s going to go to a bookstore, it should be one belonging to Ezra because he and Aria were authors and he was owning a bookstore. We really began with the meat of the story and then went from there to find our fun Easter eggs.” Episode 6 also referenced another show created by Roberto Aguirre-Sacasa: Riverdale. As Imogen and Tabby learned, after Radley was shut down, some patients were sent to Sisters of Quiet Mercy.

“That was much less calculated. That was thrown in, on a little bit of a lark,” Aguirre-Sacasa admits. “I don’t think Lindsay and I thought we would be allowed to even reference Riverdale since they’re such separate universes, but it kind of stuck and I guess it now means there’s a map of the East Coast under the Warner Bros. umbrella [where] you’ll find Riverdale, Greendale, Millwood, Rosewood, Ravenswood.” Adds Calhoon Bring, “New York City.”

But was that just “a fun nod,” as Aguirre-Sacasa calls it, or is it possible this could mean anything for Pretty Little Liars: Original Sin or Riverdale going forward? “I think it was mostly for fun,” he says. “I think there’s a pretty rich PLL universe that’s out there that if we were to expand or to include other Easter eggs, it would probably be from the PLL universe. I’d love for a road trip to Ravenswood.” Before and during the road trip to Rosewood, Imogen and Tabby opened up to one another. Neither can remember much, and by the end of Episode 7, they’re not only wondering if they were raped by the same person (from their high school) but they also have a plan to possibly identify him.

“I love the way [Episodes] 6 and 7 work together and I’m so happy those drop together. They’re quit emotional, meaningful stories,” says Calhoon Bring. Tabby spends Episode 7 trying to find an adult to open up to, including a female deputy, her mom Sidney (Sharon Leal), and Nurse Simmons (Cristala Carter), whom the creator calls “a safe space” and “one of our very supportive, positive characters.”

But then Tabby sees the blood drive poster and she’s “such an active person and such an imaginative person, [so] she really switches gears, and decides, ‘maybe for me, maybe the way I process and the way I solve this is not talking about it just yet but solving it. We’re so right now in the habit of solving mysteries with A, can I solve this?’ Episode 8 really becomes about the girls all coming together, learning about what happened to Tabby and Imogen, supporting each other and doing their version of an Ocean’s Eleven heist, which is stealing blood from the Millwood High blood drive in hopes thy can test that DNA against Imogen’s baby and solve this crime themselves.” Also in these two episodes, Faran (Zaria) learns that the corrective surgery her mom (Zakiya Young) had her have as a child for her scoliosis was against the doctor’s recommendation (thanks to a file drop in her locker from A). As a result, before her performance, she changes her bio to include that and makes her photo one of her scarred back. Then, she decides she won’t be having another surgery. Would she have been able to make those moves without A and the other Liars in her life at this point?

“I do think she’s been emboldened by her friendships and she has been pushed in a direction she may not have been without A’s helping gloves,” Calhoon Bring acknowledges. That being said, “Faran’s a strong-willed character. I say she’s our most honest character. She’s amazingly fun to write because Faran’s someone who says whatever she’s thinking and I love that and think that’s so freeing. I think had she had the information beforehand, she might have had this conversation with her mom, but without A, she might have never seen it.” Speaking of A and the Liars, Noa’s (Maia Reficco) mom Marjorie (Elena Goode) seems ready to go to rehab after she was fired for stealing drugs, until she decides she can handle it herself after her daughter’s boyfriend Shawn (Alex Aiono) calls her out. Plus, Mouse (Malia Pyles) takes a page out of the villain’s book and sends her mother, Elodie (Lea Salonga), an anonymous text warning her that her worst fears would come true if she wasn’t honest with her daughter. That’s when Elodie reveals that the man who was supposedly trying to kidnap her as a child at a carnival was actually her father, leaving Mouse to wonder if he just wanted to be part of her life. (After college, Elodie needed money and found a couple looking for a surrogate; since they didn’t use an agency, there was no one to stop her from keeping Mouse.)

“We love that Mouse takes a cue from A to get Elodie to finally deliver the truth about her dad. Episode 8 is our Thanksgiving episode, and a lot of these stories between the girls and their parents come to a head,” Aguirre-Sacasa teases. “For instance, in Episode 8, Tabby and Sidney have a big reckoning about what happened with Tabby. In Mouse’s story, she sort of is stonewalled a little bit with her moms, but she now has this piece of information she knows that it was her father who tried to abduct her or spend time with her or do something at the carnival.”

He continues, “it feels like in some way, Mouse’s season story is about trying to find a family, and reconstitute her family, so she’s trying to do that with her mom, she’s tried to do that with Steve, the guy she meets online. The next logical thing might be, what if I can track my dad? That’s where her story pivots in the next couple of episodes.”