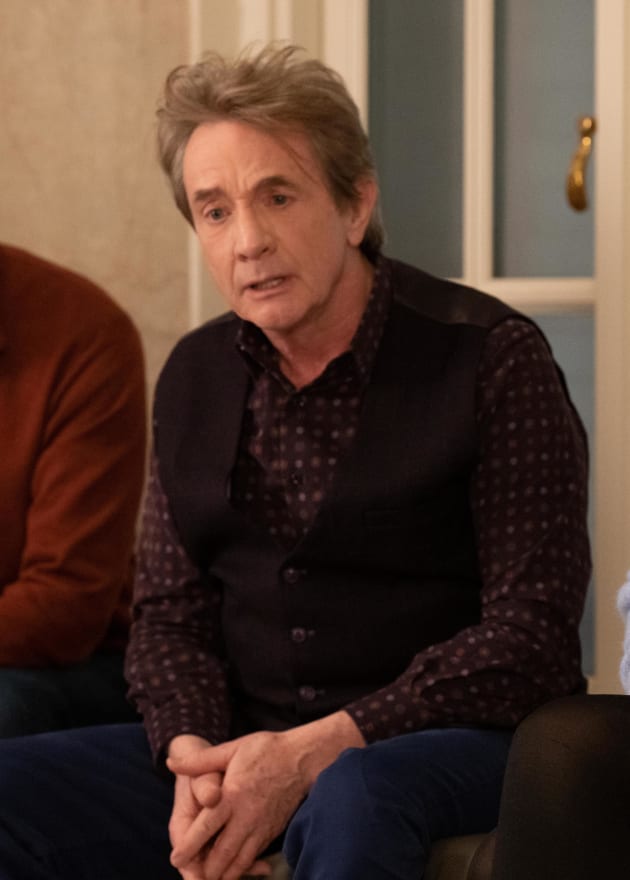 In the darkness, everything is illuminated.

On Only Murders In the Building Season 2 Episode 8, a blackout engulfs the entire tri-state area.

This episode has it all, folks — romance, suspense, thrills, a Simon and Garfunkel singalong (complete with yodeling), and a cliffhanger reveal that will lead into the final two episodes.

There’s a thin line between civilization and chaos, and that line is electricity.

Only Murders In The Building Season 1 Episode 8 introduced us to the Arconiacs — Sam (who narrated), Paulette, Marv, and Grant. In yet another parallel, this episode was narrated by Marv, the oldest of the fans.

Who wants to bet Season 3 Episode 8 will focus on Paulette, played by the delightful but currently underused Tony winner Ali Stroker?

Could there be any weight to Marv’s theory about the 6th Avenue Slasher? This is the first we’re hearing about it.

It strikes me as a playful mockery of the conspiracy theorists who find patterns where there are none, hoping they can be the ones to solve the mystery. (Yes, I’m aware of the irony given all the speculation that happens right here in these reviews!)

Only Murders In The Building has always managed to acknowledge its fans and critics with gentle ribbing that doesn’t come off as cruel, even if it’s occasionally forced.

Marv may be delusional in his theories (or he may not, it’s impossible to say yet). We all want to make sense of the world that seems senseless, to interpret random events as stories with purpose and meaning,

Marv’s desperation to help his beloved podcasters, to be part of something, initially came off as creepy, but it’s mostly just pathetic. He redeemed himself in the end, thanks to Lucy’s declaration that he wasn’t the one pursuing her.

The only silver lining to having a serial killer on the loose is the way it can unite a divided city — everyone huddling in their apartments at the same time, terrorized by the same psychopath. There’s nothing like a crisis to bring New Yorkers together

Daniel Oreskes as Marv treads the line well. Marv’s always been a bit weird since he’s clearly older than Sam, Paulette, and Grant, by a lot, but hangs out with them because of their shared, morbid interests. In a way, he’s like a reverse Mabel.

Marv’s melancholy about his daughter is yet another example of the themes of unconventional but devoted fatherhood that infuses this entire series.

Perhaps his daughter is someone we’ve already met — maybe Alice (he mentioned she was gay)? Amy Schumer? Probably not, but where the heck has she been anyway? She seems to have gone the way of Oscar, Uma, and Leonora, in secondary character purgatory.

Technically, this was Marv’s episode, but so much of it focused on Howard, which suggests that we may not be getting a fully Howard-centric episode this season.

It would be such fun to get glimpses into his mind, but at least we got to see inside the cat-gentleman’s heart a little here.

The power may be out, but there are sparks flying off of that one.

Michael Cyril Creighton is popping up everywhere these days, from Dexter: New Blood last winter, the upcoming A League Of Their Own series, and the currently-filming Season 5 of The Marvelous Mrs. Maisel.

It’s richly deserved success — the man is hilarious and endearing. He can deliver ridiculous lines with utmost sincerity and infuse a yodel with heartfelt longing.

Howard is a weirdo, but we are 100% rooting for him in his relationship with the mysterious and handsome subletter Jonathan. Their chemistry is off the charts! Howard was even willing to de-cat himself to be with Jonathan!

Fun Fact: Jason Veasey, who portrays Jonathan, actually did appear in The Lion King on Broadway!

Based on the timeline of how this episode shook out, the killer couldn’t be Howard, could it? It would be bizarre if it were Jonathan.

Is the sneezing a red herring? Lucy said the killer sneezed, and Jonathan did sneeze before he left Howard’s place, but that’s only because he’s allergic to cats. Anyone can sneeze. Also, Jonathan is arriving so late in the season, it wouldn’t exactly be satisfying.

If you’ve listened diligently throughout the season, you will have heard the random yodels echoing throughout the Arconia every now and then. The payoff here was utterly perfect. Yodelshop — what a concept!

Do you know yodelshop? Classic barbershop harmonies punctuated by the ancient alpine art of distance yodeling.

The “Sound Of Silence” sequence was brilliant, even if it’s a common trope. You can evoke more with music and lyrics than with dialogue or voiceover narration.

There’s wiggle room to be more dramatic and emotive, to witness how each character relates to the universal themes of alienation and loneliness presented in Simon and Garfunkel’s profound ballad.

Like the blackout, the song brought everyone together, all feeling the same fear, unease, and community.

It gave a chance for leaders and helpers to emerge, like Ursula, with Gut Milk to the rescue, and Lester, who would climb 14 flights of stairs to help one of his residents.

The scene with Nina was the most time we’ve gotten with Lester, an Arconia constant, since… well, ever! He’s just always been there.

Whether this scene was there to drop some hints or just to give a moment to some outlier characters, who knows?

Lester could be a suspect. He knows all the ins and out of the Arconia. Bunny threatened to fire him the day she died. Nothing’s impossible. And he’s always just BEEN there. Was his discussion with Nina about how great Bunny was to throw her off the scent?

Nina Lin: Lester, have you heard anything about who they think killed her?
Lester: No. But I must have let them in. That’s what I think about. They must’ve walked right past me.

We now know that the Glitter Man is none other than Detective Kreps. Does this mean he is the killer?

It’s all but certain he’s the one who was following Lucy — why indeed would he be there tonight? And in Only Murders In The Building Season2 Episode 6, he called all the podcasters together in Bunny’s apartment?

Kreps could have been there looking for evidence, it’s true, and Lester would let in a police officer. It wouldn’t be suspicious, especially if Kreps were the one working Bunny’s case.

However, it was around this time last season that we suspected Teddy and Theo were Tim’s killers, and it turned out to be Jan.

It’s likely our next episode will be Kreps-centric, and if we’re going with a Season 1 parallel again, Only Murders In The Building Season 1 Episode 9 was Jan-centric, and she turned out to be the killer, so it’s possible.

Was Kreps the one trying to get Bunny’s painting? If so, why? Where are the hints?

He has tried to get everyone to stop solving the case, which would make sense if he’s trying to frame Mabel. He did say this was supposed to be his career-making case. But why would he have mentioned Williams was away if he was texting them? Wouldn’t he want to keep his cover there?

What is up with the comment about teenage girls? Creepy! In Episode 6, Cinda mentioned his reputation — is that what she was talking about? Keep Lucy away from him!

What will Mabel do with this information? Hopefully, she’ll get a hold of Detective Williams before it’s too late. It’s whether or not Williams will believe her that’s the question!

This was a fantastic episode all around. Even Oliver’s (or, should I say, Chekov’s) dips had a dramatic arc!

The scenes where Lucy was in peril in the passageways, pursued by the intruder, were downright terrifying. It was a true thriller, in every sense — the cat-and-mouse scurrying through the floorboards.

There is so much left to wrap up in two half-hour episodes! The ending of the season is upon us. We will find out who killed Bunny and why, but will yet another murder in the building leave us with another cliffhanger finale?

How do you think it will all come together? Share your theories in the comments!