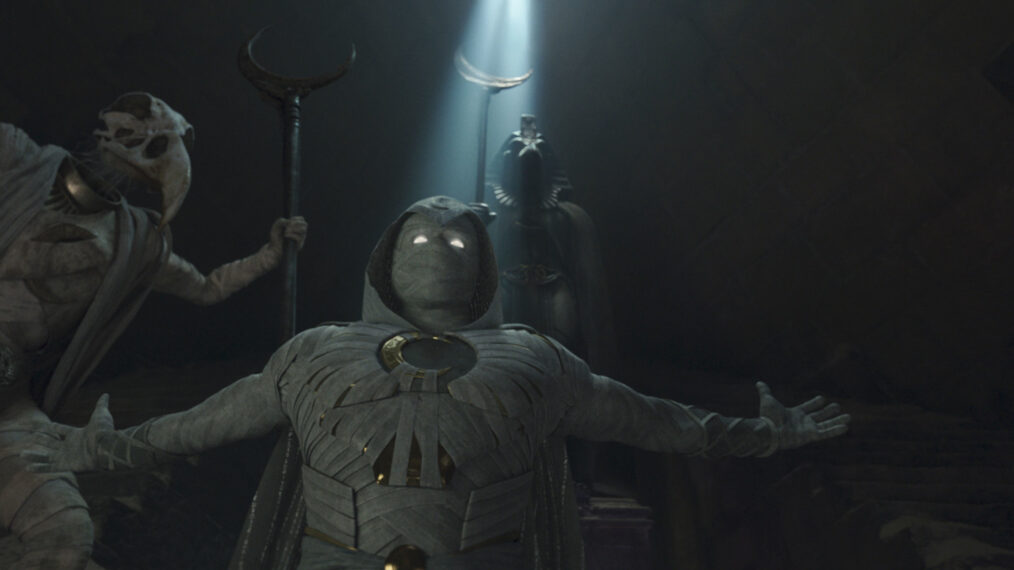 ‘Moon Knight’ Finale: Marc Races to Save Steven… and the After last week’s trippy, sad stroll through Marc’s (Oscar Isaac) life, Moon Knight’s final episode returns things to the superhero status quo. We get fights aplenty, as well as a meaningful new outfit for a certain character… and by the time the end credits conclude, we realize there’s more to Marc than even Khonshu (voiced by F. Murray Abraham) knew.

Arthur (Ethan Hawke) gets the idol and makes it to the chamber of the gods, where he kills all of their avatars and releases Ammit (voiced by Saba Mubarak). Even though his scales don’t balance, she still wants him to be her servant. Meanwhile Layla (May Calamawy), who snuck into the chamber with Arthur’s people, releases Khonshu (on the way, Taweret [voiced by Antonia Salib] spoke to her through a corpse and told her that was what she needed to do). They form an uneasy alliance — Khonshu wants her to be his avatar now that Marc’s dead, but she only wants his help, not to serve him. While Layla and Khonshu confront Ammit, Marc reaches the field of reeds… and then decides he doesn’t want to stay. Against Taweret’s urging, he goes back for Steven. After an emotional speech during which he tells Steven he’s “the only superpower [he] ever had,” Marc manages to free his alter, and they run through Osiris’ gates and back into the real world. Inside the tomb, Marc awakens and Khonshu saves them using the suit.

Marc and Steven go to Khonshu and make a deal: Once this mess with Ammit is cleared up, they’ll no longer serve him. Meanwhile, in the chamber, Khonshu and Ammit fought (Khonshu left when he sensed Marc was alive) and Layla, having learned from the final surviving avatar that Ammit could be weakened if she were imprisoned in a human form, decides to become Taweret’s avatar.

As Arthur’s followers start to judge everyone, Marc swoops down and tackles him from the top of the pyramid, sending them crashing through a town. Khonshu, meanwhile, battles with Ammit. Just when it looks like Marc might lose, Layla appears — in a cool new outfit with Wonder Woman-esque gold wings — and saves the day. But even united, the trio of Marc, Layla and Steven is not strong enough to defeat Arthur, and Khonshu’s not emerging victorious over Ammit. That is, until something unexpected happens; Marc blacks out, and when he wakes up he’s beaten Arthur senseless. “That wasn’t you, was it, Steven?” he asks. “Not a chance, mate,” his alter answers. Looks like we are, indeed, getting that third alter… Layla and Marc go back to the chamber of the gods, where they cast a spell to bind Ammit to Arthur’s body. It works, and then Khonshu strongly urges Marc to kill Arthur, saying if he doesn’t, she might find a way out. Marc refuses, telling Khonshu that if he wants them dead, he’ll have to do that himself. “Now, release us,” he says.

He “wakes up” in the asylum, where Arthur is still his doctor. Ultimately, he rejects Arthur’s diagnosis and says he’s going to go save the world. Then he awakens in the real world, back in Steven’s apartment. “I can’t believe it worked!” Steven exclaims. “I can’t believe you live in this frickin’ mess,” Marc deadpans.

And that’s the end… until a post-credits scene, when Khonshu breaks Arthur out of a mental hospital. In the back of a limousine, Khonshu tells Arthur that Marc has no idea how troubled he really is. Then the partition slips down, and he tells the man to “meet Jake Lockley.” “Today is your turn to lose,” Jake, Marc’s third alter, says in Spanish. Then he shoots Arthur. Seems like a good setup for a second season, which hasn’t been announced.