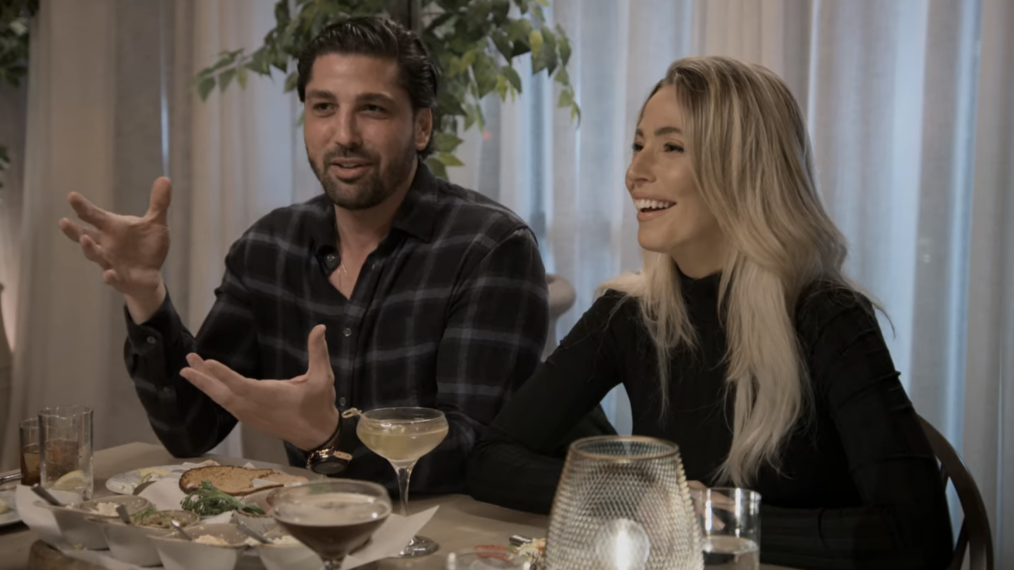 ‘Love Is Blind’s Shaina & Husband Christos on How They [Warning: The following contains MAJOR spoilers for Love Is Blind: After the Altar Season 2.]

Netflix‘s Love Is Blind: After the Altar takes viewers back into the drama of Love Is Blind Season 2 — not Shake and Deepti’s, but rather Shaina, Natalie, and Shayne’s.

The first of three episodes (all streaming now on Netflix) reveal Natalie Lee and Shayne Jansen‘s engagement was on-again, off-again in the months following the Season 2 finale. At one point, Shayne says that Natalie’s last text to him was along the lines of “I never want to hear from you again.” The break, according to Natalie, was because of Shayne’s relationship with Shaina Hurley.

Natalie accused the pair — who nearly got engaged in the pods and stayed connected afterward — of exchanging flirtatious Instagram messages about what their sex life would be like if they were together. Shaina says that didn’t happen.

Shaina brought her then-fiancé and now-husband, Christos Lardakis, on After the Altar with her. Here, the couple gives an update on their married life since tying the knot in July. Plus, the two dive into how they handled the drama with Natalie and Shayne this season.

How has married life been so far?

How do you feel different?

Christos: It’s nice knowing that when you come home, your loved one’s there.

You weren’t married yet when filming After the Altar. Did going on the show speed up the timeline of your wedding at all?

Shaina: We’ve known each other, and so it was kind of like, let’s do it. Why wait another whole year and a half just to get married in the summertime? So we did a short engagement to a wedding. He planned it. How did you prepare Christos for the show/filming?

Shaina: We had just moved in together when [Love Is Blind Season 2] came out, so he was seeing all aspects of the reaction [on social media]. I forewarned him. I was like, “Are you sure you wanna film?” I was like, “You think you know what you’re getting yourself into, but you don’t know what you’re getting yourself into.” But he’s Greek, he loves drama, so he was like, “I can do it. We’re gonna do this.”

I was trying to be like “just think before you speak. Don’t react how I react, you know?” [Laughs] It was fun, but I think when we’re together, it’s powerful. We protect each other.

He was the best support system ever. He really helped me get through it. It was rough; it was hard. It was an intense season for many people on the show.

Christos, what were you expecting going into the show, and did it meet your expectations? Exceed them? Change them entirely?

Christos: I’m camera shy. I keep pretty private, but after seeing how she was on the show and how she was feeling, and everything we went through, it was a little tough on her because of the drama.

Shaina: Yeah, it’s a little rough getting back in there. There was some tension between you and Natalie that was a continuation of things that happened in Love Is Blind Season 2. How did you handle Natalie’s comments about your relationship with Shayne?

Shaina: When I first heard, I was kind of dumbfounded, ’cause I had no idea where it came from. Me and Shayne are buddies. We’ve been friends. I think the audience is gonna see that there’s absolutely no validity because the timeline just doesn’t add up ’cause we [Shaina and Christos] were together.

It’s funny ’cause me and Shayne aren’t in each other’s types. We just don’t have that kind of chemistry. We’re just friends, so of course, we’ll check in with each other and stuff like that. There’s messages on each other’s stories, like “just checking in.” I have no idea where this is coming from.

Christos: When I heard, I didn’t buy it for a second. Trust me, I met Shayne.

Christos: Trust me, I’m Greek. I love drama. I just don’t like fake drama. It wasn’t even possible that that happened.

Shaina: Again, we have access to each other’s phones, if we need to. There’s nothing to hide.

What’s your relationship with the rest of the cast after doing After the Altar?

Shaina: I’m still in contact with Danielle, just trying to be there for her right now [after her split from husband Nick]. And then, me and Deepti, we’ve always kept in touch with each other. We’re both so busy. It’s been so hard. I’ve been so crazy with wedding planning and all that — thank God it’s all over. Not that I’ve been planning the wedding, but you know, helping plan.

But yeah, I’m still in contact with Deepti, Danielle. Me and Shayne, we talk. We check in with each other. Very cordial. Would you ever do reality TV again, together or solo?

Shaina: I think filming’s so much fun. I actually like the whole production. I think it’s so interesting and fascinating. I’m wiser, I feel, a little bit now.

Christos: I think once you get comfortable, you’re more comfortable with how you react.

Shaina: You really do get used to it, which could be good for editing. [Laughs]

Christos: And then, more comes out.

After the tumultuous Season 2, and then After the Altar drama, what do you want viewers to take away from those three episodes?

Shaina: Just that I promise I’m not the portrayal of what people think I am. I just hope they see a different side to me and that I love everyone. I just want us all to get along, and let’s just move on. And to show off my new husband.

Christos: The biggest thing is everyone needs to find their person. You can have so many things in life, but if you find your person and you can get the right job, I think you’ll be happy.

Shaina: Have the right job? You’re so funny. [Laughs]

Christos: I do [think that]. It feels amazing coming home to your soulmate.

Love Is Blind: After the Altar, Season 2 Streaming Now, Netflix