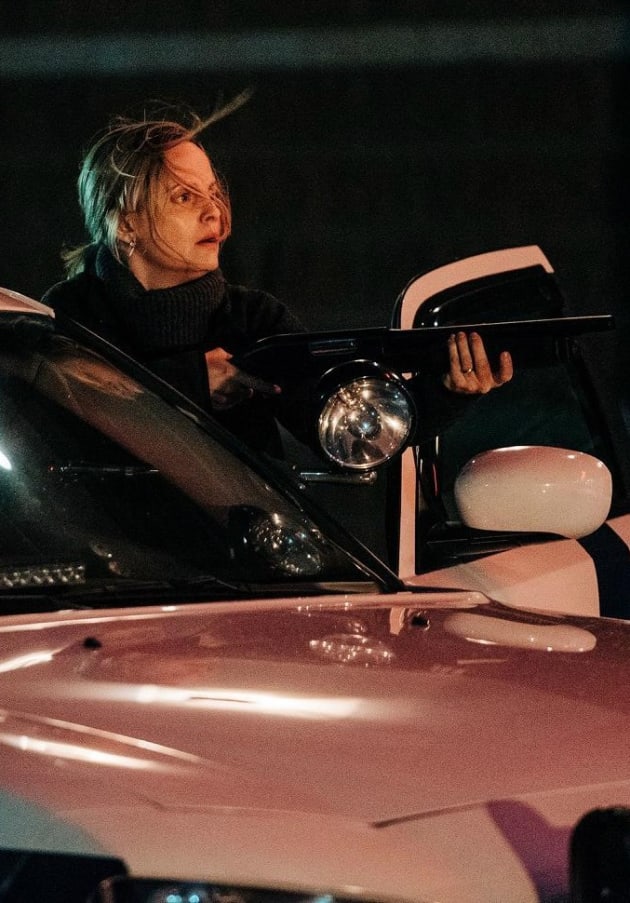 One of my favorite things about movies is how writers and directors can take the every day and use it to give us food for thought.

Locked In writer and director Carlos V. Gutierrez hopes to do that with his film.

Locked In is not entirely successful, but you’ll be looking over your shoulder the next time you’re in a storage facility.

Maggie’s husband is in prison, which gives the devout character some wiggle room when dealing with seedy individuals and reminds her that the ultimate goal is survival.

In other words, morals be damned when it comes to protecting your family.

Maggie is a manager for a storage facility. It’s a structure several stories high and a maze-like floorplan.

Right out of the gate, we learn that Maggie is struggling financially. She can’t keep it together, and with eviction looming, her moral bargaining begins.

Maggie and Tarin wouldn’t be at the StoreMore facility late at night if she weren’t desperate. But desperation takes on a new form when mother and daughter get caught up in a deal gone wrong inside of StoreMore.

Four men find themselves at crossroads in search of diamonds previously heisted. Lee (Bruno Bichir) owns StoreMore. He’s not the best boss in the world, but Maggie still cares for him.

While in her office attending to her own moral quandary, she witnesses two men, Ross (Manny Perez) and Mel (Jeff Fahey), confronting Lee. Worried for Lee’s life, Maggie decides to investigate.

Maggie, and eventually, Tarin get roped into a game of cat and mouse with men determined to get their hands on their precious diamonds.

Before it’s all said and done, Costas Mandylor enters the scene as Harris, a detective who might be Maggie’s saving grace.

There are many reasons why using this setting makes sense. It’s desolate and stark, with many options to inflict harm on someone.

Coming into Locked In, I thought someone would be, well, locked in. As it turns out, the term must refer to something else that I haven’t determined because nobody is locked in without the means to escape.

They’re in and out of that facility on multiple occasions, and Maggie and Tarin’s fear for each other’s well-being always drags them back in when one or the other escapes.

Locked In is a movie where every two steps forward lead to three steps back.

Just after you’re whooping it up because Maggie pulled one over on the baddies, you’re dumbstruck at her next move.

It gets a little frustrating watching characters who do not act as expected, by which I mean how I would react in the same situation.

Then again, if everyone acted as I would, the movie would be much shorter.

The cast is comprised of working actors who pump up B movies with their presence. They’re more than up for the task, but it’s hard not to wonder how they ended up here, as most are better than the material.

What makes Locked In interesting is that Maggie is continuously unsure of her actions but knows she’s got no other choice.

Her confliction works, but it still feels like we only scraped the surface of why it works.

As much as Gutierrez attempted to explore how far you’d go to protect the ones you love, a deeper understanding of Maggie would have made the film more impactful.

You can find Locked In on VOD platforms such as Prime Video and Apple TV.

Carissa Pavlica is the managing editor and a staff writer and critic for TV Fanatic. She’s a member of the Critic’s Choice Association, enjoys mentoring writers, conversing with cats, and passionately discussing the nuances of television and film with anyone who will listen. Follow her on Twitter and email her here at TV Fanatic.