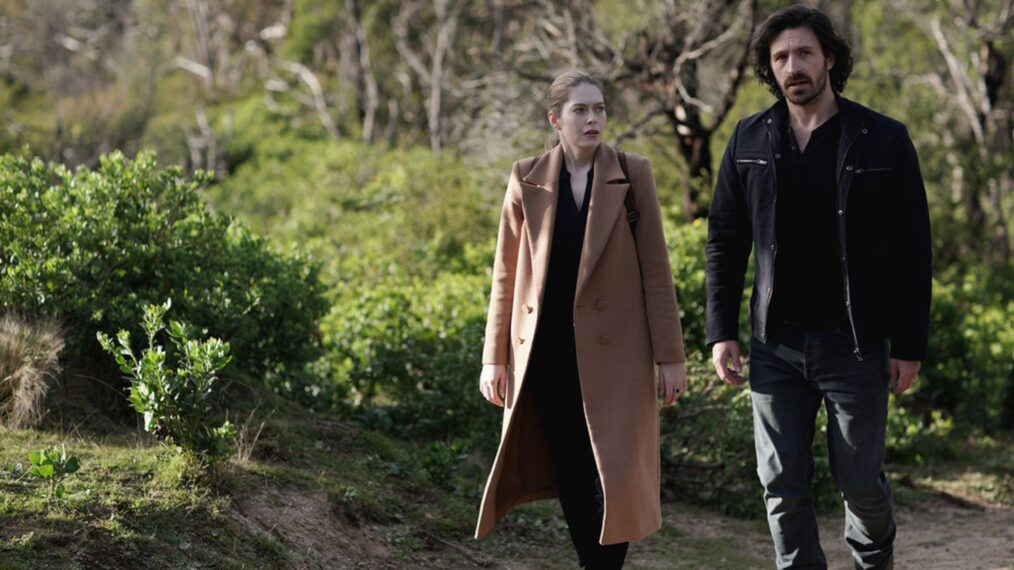 La Brea left fans with plenty of lingering questions as the midseason finale introduced new twists and turns in the time-traversing series.

As they await the show’s 2023 return when Season 2 will continue its run on NBC, showrunner and creator David Appelbaum is helping to answer some of the biggest cliffhangers. In the episode, “1988,” the reunited Harris family was forced to make a big decision as they decided to join patriarch Gavin (Eoin Macken) in 10,000 BC where he hopes to put an end to the sinkholes displacing people from their own places in time.

But they left Levi (Nicholas Gonzalez) behind in the 20th century! Appelbaum addresses how that will play out upon the show’s return, as well as what it means for the love triangle with him, Eve (Natalie Zea), and Gavin. Plus, he breaks down how Taamet’s (Martin Sensmeier) threat will loom over Ty (Chiké Okonkwo) and Paara (Tonantzin Carmelo), and where Lucas’ (Josh McKenzie) near-fatal experience leaves him with Veronica (Lily Santiago). As mysteries loom, Applebaum offers some relief by breaking down some answers, below. Have we left Levi behind for good?

David Appelbaum: Great question! I don’t want to give anything away, but there will be some exciting surprises in the back half of the season!

The Harris family is together, but are they going to 10,000 BC like they think? Can you tease what’s to come from their sinkhole dive?

They will be going back to 10,000 BC. In fact, the entire back half of the season will take place there. Previously, we had told a concurrent story in another time period, but now we will be switching things up.

Ty and Paara’s relationship is deepening. Are they headed for potential disaster with her first husband, Taamet, in the mix?

Taamet is definitely going to rear his head again. At the end of Episode 7, Taamet promises to seek revenge against Scott [Rohan Mirchandaney] and the people he cares about. That threat will be hanging over us during the back half of the season and will eventually come to fruition in a surprising way.

Eve says goodbye to Levi, but should viewers see that as a definitive decision when it comes to her love life?

By the end of Episode 7, Eve has made a definitive choice to be with Gavin. It was a difficult decision because she had deep feelings for both Gavin and Levi, but now she has made up her mind. Moving forward, Eve is with Gavin, but they are definitely going to find lots of challenges that will complicate their relationship. Will there be any mother-daughter breakthroughs for Eve and Izzy (Zyra Gorecki)?

Being a parent in 10,000 BC is not an easy thing. On the one hand, Eve has a drive to protect her children at all costs. But at the same time, she wants to let them grow and become their own people. That challenge is at the heart of Eve’s relationship with Izzy. She’s constantly faced with questions about how much to hold on or how much to let them go and make their own decisions. Facing those choices will be one of the main issues moving forward for not only Eve but the entire Harris family.

There was a new development with Veronica and Lucas – are they in the clear yet following his near-fatal experience?

Lucas is going to recover – he’s going to live. But he’s going to have a lasting physical impairment from his injury – he loses the use of one of his hands. That problem is going to complicate life in a major way for both Lucas and for many of the people around him.

Gavin’s met more family for the first time in a matter of episodes. Are there more secrets to uncover, or will he be given time to cope?

There will absolutely be more secrets to uncover and his family. His complicated relationship with his father James [Jonno Roberts] and his mother Caroline [Melissa Neal] is going to be one of the driving forces in the back half of the season.

What else should fans look out for when the show returns?

The back half of the season will entirely be set in 10,000 BC and many of the stories will be based around the challenges of living there – how do we survive in this inhospitable environment? How do we avoid the dangerous animals lurking around almost every corner? How do we function as a community? We have 13 series regulars, and all of them are going to have their own emotional and exciting character stories. But the heart of the show will remain the Harris family. They have now been reunited, but their relationships will continually be challenged. And they also grapple with a question that’s been at the heart of the series from the beginning… How are we going to get home?