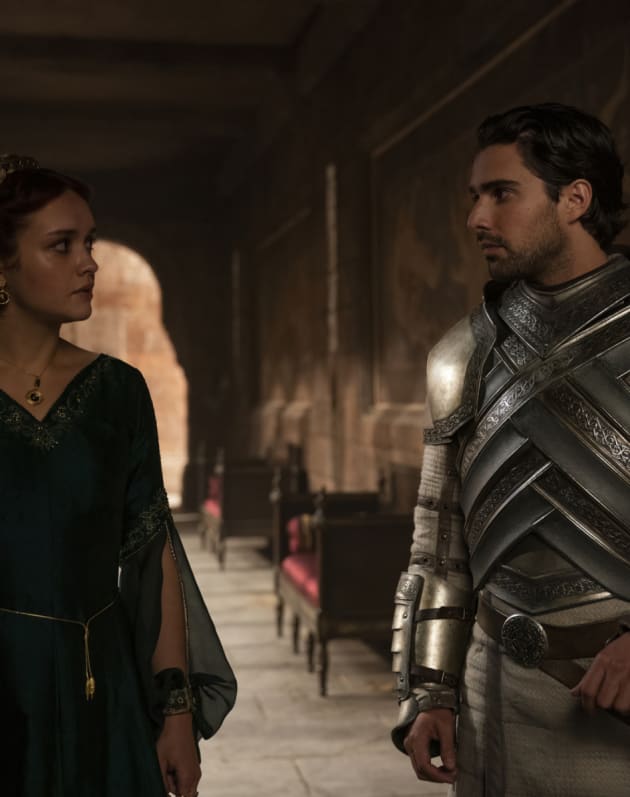 House of the Dragon Episode 7 Trailer: The Knives Are

House of the Dragon’s pace has increased considerably as the season has progressed.

Looking ahead to House of the Dragon Season 1 Episode 7, it seems like things are getting gnarly between Rhaenyra and Alicent.

Everyone looks set to unite for — spoiler alert — Laena’s funeral, but there’s a lot of angst from many of the characters.

Since the original trailer for the series, we’ve known that Alicent would pull a knife on her one-time friend, and it looks like that will happen at the funeral.

It does make us question what happens before we get to that point.

At the end of House of the Dragon Season 1 Episode 6, Rhaenyra departed King’s Landing for Dragonstone, so I can only imagine their friendship has deteriorated even more.

It’s hard to believe they were so close but are now so far apart.

We learn in the trailer that someone stole Vhagar, which is very interesting.

How does one steal a dragon? We’re going to find out.

Rhaenyra told Alicent she would make sure her son got a dragon if they united families, but something tells me Alicent will get her son a dragon without anyone’s help.

Alicent is now more ready than ever to usurp all the power in the realm, and with her father’s return, we’re going to see just how cutthroat she really is.

Otto was banished thanks to Rhaenyra’s tryst with Daemon, so he’ll be dead set on getting some form of revenge.

We have much to look forward to on this big episode, but the aftermath of Daemon’s loss will probably play a huge part in the set-up for the final episodes of the season.

Check out the teaser below and hit the comments with your thoughts.

Interview with Lori Robbins, Author of Murder in Third Position

Need a Cheap Laptop? These Are Our Favorites