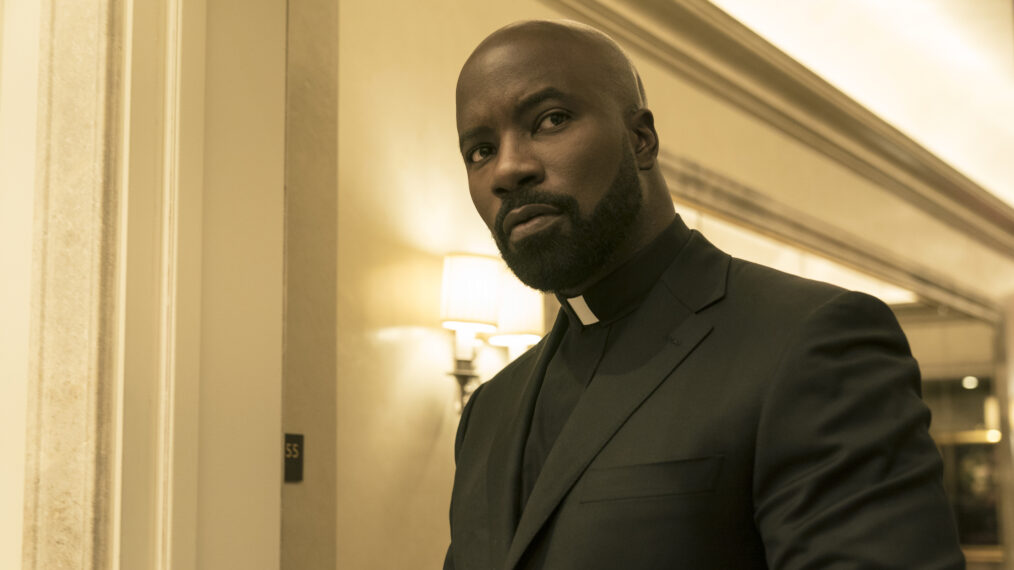 [Warning: The below contains MAJOR spoilers for Evil Season 3 Episode 2 “The Demon of Memes.”]

David (Mike Colter) finds a way to escape the monotony of mass at 6 a.m. and listening to confessions in the latest episode of Evil, while Kristen (Katja Herbers) and Andy (Patrick Brammall) will now be able to afford the work they need to do on their house … but that money is coming from a dark source.

David returns to his room to Victor Leconte (Brian D’Arcy James) waiting for him. He works with the Vatican secret service, the Entity, with an offer that will allow David to do the thing he’s become a priest to do: serve God, do good in the world, and fight evil. He’ll receive a call asking him to perform a task without question, preceded by a phrase in Latin. He can’t tell anyone. It’s up to him if he responds. When the calls come from “A Friend,” David says yes.

Why? “I think boredom,” co-creator Robert King told TV Insider. “We had a priest come in talking to us about his first years as a priest — I think he was a priest for 20 years, Father Jim — and he was talking about how he was so excited about becoming a priest because of his idea of attacking injustice, of bringing good to the world, but then he got down to it and he had mass at 6 a.m., he had all these confessions that bored him to death. And so the bottom line is you think you’re going to change the world and then what you do is you’re just a small part of a bureaucracy.” This also allows them to take David to other places. “Look, we’re playing off Mike Colter being a superhero, Luke Cage, so the very fact he’s a priest is comic and yet there is an opportunity within the church to explore that John le Carré part of it,” Robert King continued.

David’s first assignments with the Entity are collecting a bible from a church and then going to a hotel room to administer last rites — under the identity of Father Michael — to a dying man. After doing so, he must find a postcard in the room and leave the door open on his way out. A man insists on paying him on his way out. Later, Victor tells him the man was poisoned by someone trying to prevent him from delivering a message. The Entity deals with humans who must be stopped, and the postcard is needed to save a messenger: the prophet Grace (Li Jun Li), whom David previously encountered and who was deported back to China and lost to a work camp. The postcard will tell them if there’s a chance to save her. As for that money David was given? Victor examines the writing on it and tells him good work and they’ll be in touch. Elsewhere in “The Demon of Memes,” Andy is recruited by “Eddie,” who’s really Edward (Tim Matheson), with Leland (Michael Emerson) and Sheryl (Christine Lahti) listening in to the Zoom call, to show him the ropes in Nepal, in exchange for him buying his business. And Andy and Kristen can’t say no to the money, especially with the groaning and blood coming out of the toilet. He’ll be gone for three months.

But why does Leland (who encourages Edward to up the financial offer for incentive) want Andy out of the way? Is it because of Kristen or something related to Andy himself and something in Nepal? “I would say it’s mainly about Kristen. Andy is not a big plus as far as Leland is concerned,” co-creator Michelle King said.

Added Robert King, “I think he wants that household to be off its axis, to be unsteady, partly because of that and partly because of [Kristen and Andy’s daughter] Lexis [Maddy Crocco] and what they believe Lexis can bring to basically the demonic structure, the hierarchy of our mythology of the show. Lexis seems to be key, so to not have a dad there just throws one more impediment at this family.”

Sheryl also wants Andy gone, so this trip brings her “into the center of that family more because she’s needed more and if dad was home, she wouldn’t be as needed as much,” Robert King explained.

And her family is very important to Sheryl, which is why she’s sticking with Leland … for now? “I need Leland. Kristen’s husband has threatened to cut me off from the family because he thinks I’m a bad influence. My family means everything to me, so I will do everything I can to stop that from happening, so I need a job, I need an apartment — he kicks me out of the house — I need money, so I need Leland, so I think I am trying to pretend that he has power over me but I think because I’m the head of this sigil, I know, whether he knows it or not, that ultimately, he’s coming down,” Lahti said.