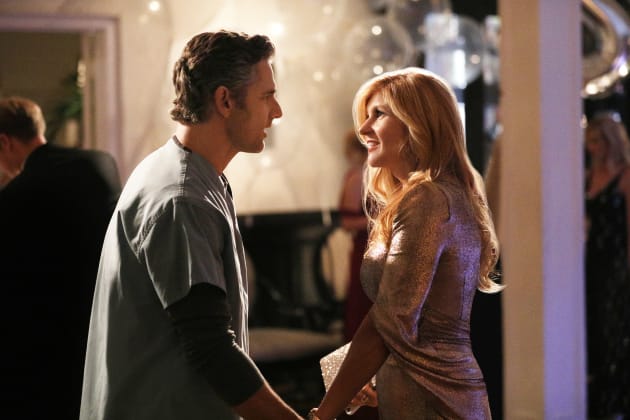 Finally, some movement on the Abigail murder mystery!

According to spoilers for Days of Our Lives during the week of 7-18-22, Salem’s most well-known hypnotherapist will hypnotize Lucas to help him remember the night of Abigail’s murder.

Lucas’ experience is supposed to leave him with more questions than answers, but it’s a good bet it’ll prove his innocence, too.

If only Lucas’ hypnosis had happened before Sami left town, she could at least be relieved that her almost-husband wasn’t a murderer too!

Maybe he’ll redeem himself enough for her to someday return to Salem and at least repair their friendship.

In any case, clips from the spoiler video suggest that Lucas witnessed the murder rather than doing it himself. He might have even tried to stop it, which could explain the cut on his hand.

Since spoilers also state that Sarah will be arrested for the murder next, he likely saw her — but is his hypnosis-induced memory correct?

Sarah would make a lot of sense as the murderer. She has been hallucinating that random people are Kristen and pulling knives on them to defend herself. Marlena told her to go to Abigail for support, too.

Though we’d like this mystery to be solved, it may be too early. Head writer Ron Carlivati promised a secret that would last all summer; could Sarah be yet another red herring?

Whatever Lucas sees appears to horrify him, but it’s unclear whether he’s terrified by recalling that he witnessed the murder or by something else, like his realization of who did it.

These scenes promise strong acting by Bryan Dalitto and Deidre Hall and should be super-emotional. Nothing could be worse for Lucas than realizing he saw his beloved niece get stabbed to death and was too drunk to be able to stop it.

Before we get to that point, Lucas has an intense confrontation with JJ. More JJ is always a good thing, and Casey Moss does intense exceptionally well, so these should also be riveting scenes.

We have eight spoiler photos for Days of Our Lives during the week of 7-18-22; please scroll down to check them out.

JJ has an intense confrontation with Lucas.

JJ isn’t known for being even-tempered, especially when it comes to his family.

And if he believes Lucas killed his sister, JJ’ll be twice as likely to go off the deep end.

According to spoilers, JJ’s confrontation with Lucas will rival Chad’s, and Jennifer will have to pull him off his once-beloved uncle.

Will gets an unexpected offer.

According to spoilers, Will gets a bite from a Hollywood agent.

He tried screenwriting once before, only to return to Salem after a month, but will his second try be more successful, especially since it’s not connected to Sami?

Just as importantly, how will Sonny react to the possibility of his husband leaving again just as they’ve decided to move back to Salem? Besides, he told Chad he would stand by Lucas, so why is he going anywhere?

Marlena is angry at Kate over her part in the Sani kidnapping fiasco, but we know she’ll ultimately agree to help Lucas.

It’s not like Sami is any stranger to getting locked up for over-the-top behavior, so maybe Kate will be able to talk to her mother-to-mother.

In any case, it’s sad for Marlena and Kate’s friendship to implode over this, and Marlena seems aware that this is just how Kate is. Maybe after huffing and puffing, she’ll soften toward her.

Chad makes a confession to EJ.

This is probably not a wise thing to do.

EJ has lost everything. Sami and Belle have dumped him, and he’s been out of the company business for a while.

He’s already cooking up a revenge plot against Kate. Nothing good can come out of him learning that Chad helped frame him for Sami’s kidnapping.

Rafe gets an assist from a potential new hire, Jada Hunter.

There’s been speculation about whether newcomer Jada is the daughter of Marcus Hunter, Steve’s friend from the 1980s.

In any case, the police department is short-staffed now that Eli and Lani are gone. Rafe and Shawn can’t do it all themselves, especially since Shawn is caught up in this nonsensical baby drama.

With all of Salem pushing Eric and Nicole back together, could this also be set up for Rafe’s next relationship?

It’ll be a relief for Lucas to realize he didn’t kill Abigail. Quite a few people will owe him apologies that he will never get, especially Chad, who blew up Lucas’ life for no good reason.

But Lucas will likely have to live with the guilt of realizing he could not stop Abigail’s killer.

Hopefully, he’s learned his lesson, and that guilt won’t drive him to drink again.

Abe has gone from being one of Salem’s top cops to being the mayor, but being in charge of a small town probably isn’t enough for his new wife.

Paulina dreams big. It would make sense for Abe to next try for governor of the state if that’s what he wants, but even that may be too small for her.

What does Paulina want? And is it something Abe will be comfortable with?

The news that the baby isn’t his needs to come out sooner or later, and it appears it’s happening this week.

Shawn already loves this baby and is understandably upset that Belle won’t see it as an innocent child and not just an extension of Jan.

But that could change when he finds out that he’s not the father. What will he do now?

Your turn, Days of Our Lives fanatics. Hit that big, blue SHOW COMMENTS button and let us know your thoughts about these spoilers!

And if you’d like some extra insight into EJ’s state of mind, check out our recent interview with Dan Feurriegel.

Days of Our Lives airs on NBC on weekday afternoons. Check your local listings for airtimes or watch online on Peacock TV on weeknights after 8 PM EST / 5 PM PST.