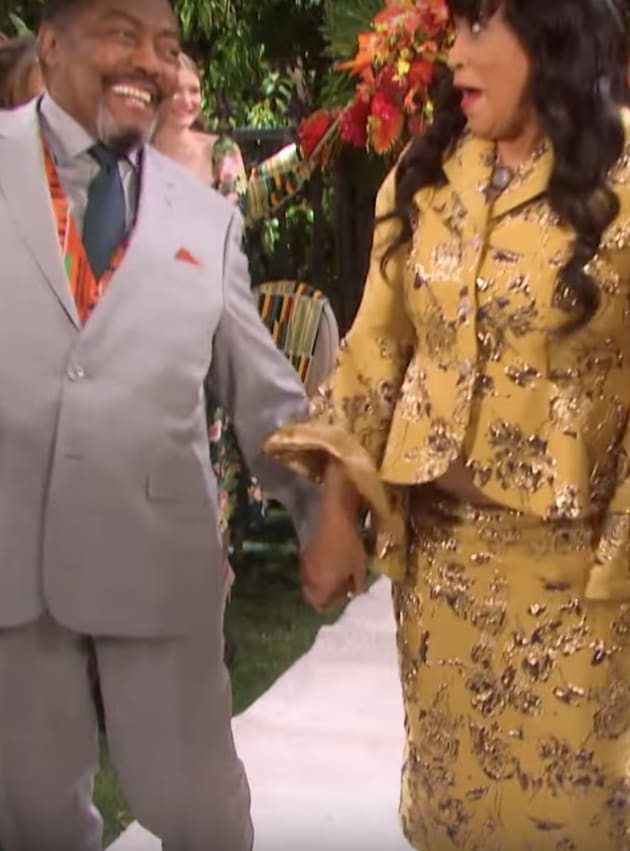 (*Christine Orlando is stepping in for Jack Ori for this week’s Days of Our Lives review.)

A lot was packed into this week on Days of Our Lives as the residents of Salem celebrated Juneteenth, a wedding, and suffered through the aftermath of a murder.

For Abe and Paulina’s wedding, Days does one of the things that it does best. Make viewers believe it’s possible to throw together an elegant wedding on a whim.

I didn’t think I’d be excited for Abe and Paulina 2.0, but the wedding was lovely, and I found myself rooting for this couple. Plus, Big Mama was there to celebrate and educate the characters and audience about the Juneteenth holiday.

Some fans have complained that the Juneteenth explanation was heavy-handed, but unfortunately, it needed to be. Back in my day, the entire topic of slavery took up about one paragraph in our chapter about the Civil War. I’d only learned this history a couple of years ago, and I’m sure some viewers didn’t know of it until recently.

Even better to have the iconic Marla Gibbs share the meaning of the holiday with characters like Julie, who, in reality, probably wouldn’t know much about it. Kudos to Days for weaving the holiday into the story alongside Abe and Paulina’s wedding, as it made it all the more meaningful.

Of course, the happiness lasted until the wedding toast, which, let’s face it, was further than they got during wedding number one so we’ll take that as a win.

As much as her timing stunk, I was proud of Lani for coming clean about TR’s shooting. And kudos to the makeup department for making TR look more and more creepy as the visions continued.

Who I wasn’t so proud of was Eli. I understand he wanted to protect Lani, but instead of telling his traumatized wife to suck it up for the good of her family, he could have gotten her a psychiatrist and a great lawyer.

The highlight was everyone being willing to keep the secret for Lani. TR was scum that no one was going to miss, but I didn’t trust some of those hands that were raised, specifically Roman and ex-Father Eric.

Roman’s an ex-cop, so I’m not sure how keen he’d be to keep this secret, but he’d likely do it for Abe. But Eric’s moral compass could have him pushing Lani to confess all. But then again, I don’t think I’d want to be the person who crossed Big Mama and Julie.

Other wedding tidbits included Johnny and Allie continuing to vie for Chanel’s affection. The twins need to back off, but Johnny’s offer of being the videographer came across as sincere, whereas Allie’s snark was far more bratty.

If Chanel is basing this decision on maturity alone, then Allie’s the loser here.

And let’s take a moment to talk about wedding outfits. Abe was handsome in that light-colored suit. Paulina’s yellow gown suited her perfectly. Lani and Chanel both wore floral prints, and though I don’t think many could pull off Lani’s dress with success, it looked amazing on her.

Then there was the wedding that wasn’t. Nicole and Rafe postponed their wedding because he working on Abigail’s murder. Knowing how long it takes the Salem PD to solve a case, we might not be seeing this wedding for a very, very long time.

But what was up with Eric inviting himself to their nuptials? Talk about weird and uncomfortable. Almost more uncomfortable than Kate grilling Eric and Nicole in front of Roman.

And a quick nit to pick, if Gabi sent the Dimera jet, why have we seen Theo and not JJ? Abigail was JJ’s sister. You’d think we’d have a siting of him by now.

Speaking of Abigail’s murder, the suspect list grew as we learned that Ava sprung Gwen from prison for a midnight stroll.

The only reason I can think for Ava to do anything for Gwen is that she feels guilty after giving Gwen up to get herself out of a jam. But I hope Ava’s smart enough to put distance between herself and Gwen now.

For what purpose did Gwen need to break out of jail if not to get her revenge against Abigail for breaking her precious mug? That Gwen intended to kill her sister is pretty much a given. The real question is whether she did it or someone else got to Abigail first.

And the show is working too hard to make Leo look guilty, which means he isn’t. Plus, I just don’t see Leo as the murdering type.

And then we have Brady and Chloe taunting Leo. These two have taken being obnoxious to a whole new level. If they can’t give this couple a decent storyline that doesn’t involve Leo, can they just keep them offscreen?

Clyde is your man if you’re looking for someone capable of murder. Clyde knows he gave Nancy a stolen bracelet, but I guess he hasn’t realized that the jewelry belonged to Abigail, or if he has figured that out, he’s far dumber than I thought.

Someone is going to recognize that bracelet. But then Clyde has to figure out how to cover his tracks because if it comes out that he offered to sell stolen items for Leo, that’s a violation of his parole. But a parole violation might be more appealing than going down for murder.

Also, am I the only one just waiting for the day that EJ makes good on his promise and takes Clyde down?

One of the few upsides of this murder storyline has been watching EJ and Chad act like brothers who love one another. Every scene between them has been wonderfully heartfelt.

And I have to give a shout-out to Days casting. The children playing Thomas and Charlotte could pass for Billy Flynn and Marci Miller’s children. They’re just precious.

Lucas, as a suspect, is the most messed up. Does he really think he was so blackout drunk that he doesn’t remember a thing yet could still somehow enter the Dimera mansion, stab Abigail, steal her belongings and get back to his hotel room?

And do neither Sami nor Lucas know how an airline schedule works? Not only would Sami have called or texted Lucas about her flight being canceled, but there are websites and travel apps that allow you to know exactly when your flight lands…except in Salem.

When Sami told Lucas, “I love you, and I’ll love you no matter what. Just tell me.” I wanted to hug her. These two know each other inside and out. If Lucas confessed all to her, she might just have forgiven him. But that wasn’t about to happen.

Instead, Lucas gave her a lame proposal, and Sami ran off to get EJ to sign their divorce papers…leaving her on the other side of the door while Belle and EJ made out once again.

No one can say that Belle isn’t playing to type. She’s cheated on Shawn in the past. With the separation papers signed, she may not legally be cheating this time, but I doubt Shawn will care about that detail.

But I can’t seem to feel any sympathy for Shawn. He’s let Jan control and manipulate him to her heart’s content, and he’s barely put up a fight.

Naming their son Shawn was a stroke of genius by Jan. It makes clear that Jan has given birth to Shawn’s only son while further alienating Belle.

And what is Shawn’s plan for when little Shawn is released from the hospital? He seems totally clueless about raising this baby if Belle isn’t there to do it for him. It’s gotten to the point where I oddly enjoy Jan toying with Shawn like her puppet on a string. Before long, I might even start rooting for this sociopath.

We ended the week with the foursome I never dreamed I’d see playing cards: Bonnie, Nancy, Victor, and Maggie. I’ll give Maggie credit where it’s due. This was one way to get Victor out of his head, and I enjoyed him sparring with Nancy, although she’s not nearly smart enough to keep up with him.

By the end, this felt like another stop on the redeem Bonnie Lockhart tour as she bonded with Victor over their hatred of Jan Spears. But considering the circumstances, I think I’ll give this one to her.

So what do you think, Days fans? Did you enjoy Abe and Paulina’s Juneteenth wedding? Was Lani right to finally confess?

Do you think you know who killed Abigail? And were you shocked that Shawn allowed Jan to name their baby after him?