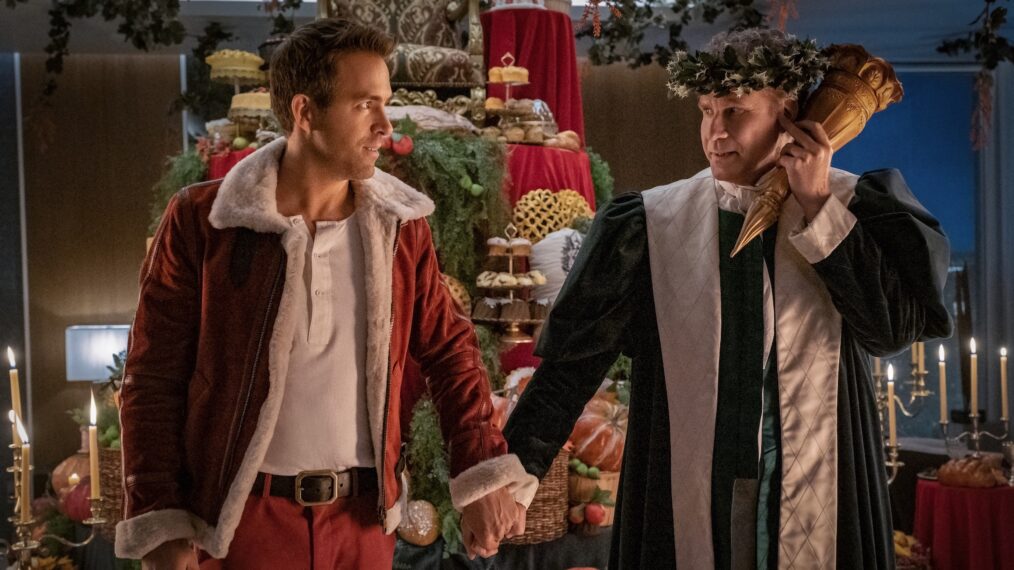 After its November 11 theatrical debut, Will Ferrell and Ryan Reynolds‘ Spirited is now streaming on Apple TV+. The Christmas movie musical features 12 brand new songs from the Oscar-winning music and lyrics duo Benj Pasek and Justin Paul (Dear Evan Hansen, La La Land, The Greatest Showman), and these tracks are bonafide ear worms that’ll have you bopping along all season long.

The music from Spirited sounds exactly how Christmas fanfare should — big, bright melodies with lyrics that teach a lesson, and of course — with its hilarious leading men — they’re loaded with humor. But Reynolds and Ferrell don’t make a joke out of the singing and dancing. They’re fully committed to the musical structure and look like they’re having a blast while doing it. And truly, Ferrell and Reynolds are a perfect on-screen pair we can’t believe we haven’t gotten before.

Spirited is a fun new spin on A Christmas Carol. In this tale, viewers go behind the scenes of the afterlife company charged with picking a “perp” to haunt on every Christmas Eve. Leading the large gaggle of ghosts is Jacob Marley himself, played by Broadway star Patrick Page (The Gilded Age). This Marley isn’t trapped in his chains forever like in the Charles Dickens classic, but rather dons them once a year to kick off the annual yuletide haunting. Ferrell plays the ghost of Christmas Present with Sunita Mani (Glow) as the ghost of Christmas Past who’s forever bound for an HR writeup and Tracy Morgan and Loren Woods as the ghost of Christmas Yet-to-Come (Morgan voices the character, Woods takes on its physical form). Reynolds plays the modern-day Ebenezer Scrooge, Clint Briggs, a media tycoon who orchestrates internet scandals and outrage in order to sell a product. His head of opposition research is Kimberly, played by the always wonderful Octavia Spencer. Kimberly has an existential crisis after years of causing chaos with Clint takes its emotional toll. And Ferrell’s Present takes a special interest in her, which in turn allows her to see him as he tries his best to spook Clint.

Unsurprisingly, Clint defies every journey the ghosts try to take him on. He wasn’t the ghostly org’s first choice — Marley gave him the dreaded “unredeemable” stamp, meaning there’s no hope he’ll change his ways. Present is determined to make Clint the second unredeemable perp to successfully make it through the program (the first seen in this movie is a suburban Karen, played by Rose Byrne — other delightful surprise cameos include Buddy the Elf and another movie star we won’t spoil for you).

Will trying to change Clint push Present to take his retirement package? Can people really change? Those are the dilemmas at play in Spirited, an entirely entertaining new Christmas tale that’s sure to be a yearly watch for movie musical lovers.

Spirited‘s soundtrack is some of Pasek and Paul’s best music yet. The songs maintain their signature sound while managing to feel entirely different from the rest of their catalogue. And choreographer Chloe Arnold delivers joyfully massive dance numbers that we’d love to see on stage. Here are our favorite musical numbers from Spirited, in order of appearance.

Facebook
Twitter
Pinterest
WhatsApp
Previous articleActors suppress their sense of self when playing a new
Next articleQUIZ: Guess the Graphic Novel Based on the First Lines