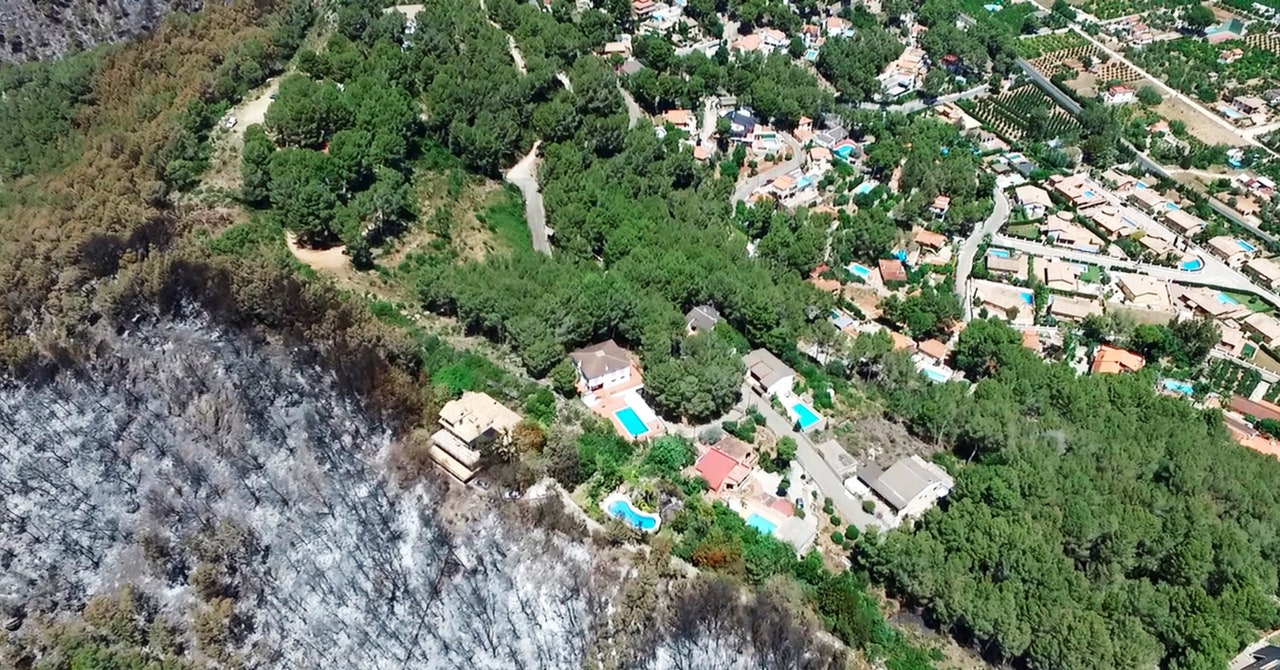 This Giant Sprinkler System Can Protect Cities From Wildfires

It is 42 degrees Celsius, there has not been any rain for weeks, and the risk of a wildfire is severe. In this dusty corner of southeastern Spain in August, the grass has turned yellow, and fields of cereals are perishing in the heat after months without rain. Walking along the road, it feels as if your skin is burning in the heat.

But on the outskirts of Ribarroja, a small town near Valencia, there is an unusual line of defense against a possible blaze. Looming above the trees near the edge of the town is a series of huge green towers that resemble streetlights. They act as mammoth water sprinklers, showering the trees and bamboo plants below with recycled water to reduce the chance of fire. They’re supplied with recycled water from the nearby houses in Ribarroja and neighboring Paterna.

This is the biggest defense system against wildfires in Europe, consisting of 40 towers that encircle the towns, the largest standing 24 meters tall. Known as the Guardian project, it protects urban areas surrounded by trees or other vegetation from the devastating effects of a wildfire by hydrating the plant life, creating a natural barrier. With climate change increasing the threat of wildfires across the continent, Guardian-style defenses could become a fixture of high-risk parts of Europe in the future.

Watering vegetation can delay the spread of a blaze because plants containing greater amounts of moisture require more of a wildfire’s energy. Other factors affect the spread of a wildfire—wind speed is crucial, for example—but generally the drier the vegetation, the more quickly a fire will consume the landscape.

“Water eats up some of the energy of a fire,” says Ferrán Dalmau, CEO of forest fire consultancy Medi XXI GSA, which developed the Guardian system. “If a plant is better hydrated, then it will slow down the fire.” But Dalmau warns that the system will not put a fire out. Guardian can slow and help control a blaze, but it doesn’t replace the need for fire services to intervene.

Indeed, hidden among the undergrowth is Guardian’s second line of defense: a series of sensors. These pass information to local fire authorities in real time, 24/7, about the humidity levels of the plants and the resulting fire risk. Based on this information, fire services are put on a higher level of alert if the risk rises. Citizens can also be sent updates on the fire risk via the messaging service Telegram.

Having shown me the Guardian system in situ, Dalmau then takes me to his office and shows me how, thanks to these sensors, the system can indicate areas that could be affected by a fire, as well as simulating how the fire might evolve. Dalmau shows me a computer graphic of the area we have just walked through. The irrigated area is a brown color, which means it is safer, but around it the rest is bright red—meaning it would be at maximum risk from a blaze. An algorithm calculates the fire risks.

After a prolonged drought and searing temperatures, 2022 has been the worst year ever for forest fires in Spain. So far this year, 275,000 hectares—roughly four times the area of New York City—have burned, which is more than quadruple the country’s annual average, according to the European Forest Fire Information System. Tens of thousands of people have been forced to evacuate their homes as blazes have raged.

Facebook
Twitter
Pinterest
WhatsApp
Previous articlePost Malone Takes a Bad Spill After Stepping Into ‘Big
Next articleI’ll Be Honest: I’m Shocked by How Great These Perfumes