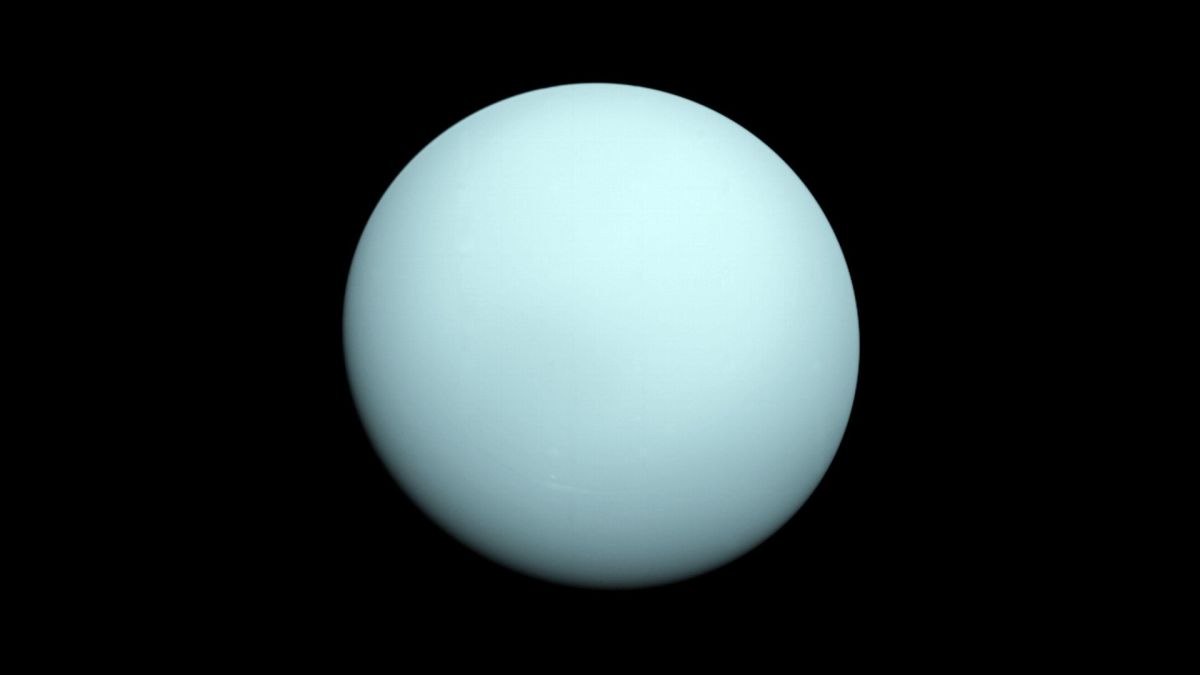 Uranus, the seventh planet from the sun, was the first planet to be discovered using a telescope. It is an odd world that tilts over on one side, with thin rings and dozens of moons.

In 2022, Uranus was selected by planetary scientists as a top target in the solar system for exploration, and NASA expects to launch a new probe sometime in the 2030s, that will explore sideways Uranus in greater detail than ever before. In English, the planet’s name can be pronounced two ways — YOU’-rin-us and you-RAIN’-us. Both invite puerile puns that have made Uranus the butt of schoolyard jokes for generations.

How did Uranus get its name?

In 1781, astronomer Frederick William Herschel spotted Uranus through his telescope, making it the first planet to be discovered in the modern scientific era, according to NASA. Herschel originally thought he was looking at either a comet or a star, but observations by other astronomers, including Johann Elert Bode in the late 1700s, eventually proved it to be a newfound planet.

The German-British Herschel tried to name the world Georgium Sidus after King George III, but Bode suggested Uranus — the Greek god of the sky — which stuck.

What is Uranus made of?

Like its neighbor Neptune, Uranus is known as an ice giant, meaning 80% or more of the planet’s mass is a hot dense fluid composed of icy materials including water, methane, and ammonia, according to NASA. This material isn’t ice in the conventional sense; rather, it is more of a compressed slurry, according to Astronomy Magazine. The term “ice giant”” caught on in the 1990s when researchers realized that Uranus and Neptune were compositionally quite different from gas giants Jupiter and Saturn, which are almost entirely made of hydrogen and helium.

In its innermost parts, Uranus has a small rocky core that heats up to 9,000 degrees Fahrenheit (4,982 degrees Celsius), according to NASA. The extreme temperatures and pressures surrounding the core mean that it is probably enveloped in elements that are compressed into exotic quantum states, and their quantum weirdness transitions into a super-pressurized “soup” that thins out the closer they get to the surface.

Uranus’ atmosphere is mainly hydrogen and helium, with a small amount of methane, which gives the planet its blue color, according to NASA.. In 2021, researchers spotted beautiful infrared auroras in its upper atmosphere.

Below the upper atmosphere, the planet’s extreme temperatures and pressures rip apart methane molecules and release carbon, which can render into a crystalline form and create diamond rain on Uranus. Stinky mushballs of ammonia may also fall through the planet’s skies when methane breaks down.

Uranus is slightly larger than Neptune, with a diameter of 31,518.4 miles (50,724 kilometers), but less mass overall, making it the second least dense planet after Saturn, according to NASA. Minimum temperatures on the planet can reach minus 371 F (minus 224 C), meaning it is even colder than Neptune in some places.

How far is Uranus from the sun?

Uranus is on average 1.8 billion miles (2.9 billion km) from the sun, nearly 20 times farther than Earth, according to NASA. Uranus’ year is equivalent to about 84 Earth years, though a single day on Uranus only lasts around 17 hours.

The system has an extreme axial tilt, with the planet, its rings and moons all tipped over more than 90 degrees relative to the plane of the solar system. Nobody knows exactly how or why this happened, but most astronomers suspect that Uranus was struck by an icy Earth-size object sometime in the distant past.

Only one spacecraft has ever visited Uranus: the Voyager 2 probe, which launched from Earth in 1977 and reached the blue ice giant in 1986, according to the Planetary Society. The robotic emissary came within 50,600 miles (81,500 km) of the planet’s cloud tops, discovering 10 new moons, two new rings and a magnetic field stronger than Saturn’s, according to NASA.

In a 2022 decadal survey, in which planetary scientists set priorities in the field for the next 10 years, experts selected a new flagship mission to Uranus as a top science goal, as reported by Live Science’s sister site, Space.com. Researchers are eager to explore Uranus because of its many enigmas, such as the mysterious x-rays that have been seen flaring from the planet, and also because clues about Uranus may inform scientists’ understanding of exoplanets, as a large number of recent discoveries are in the same size range as Uranus and Neptune.

A future Uranus probe would cost around $4.2 billion and would launch in 2031 or 2032 in order to arrive at the planet in 2044 or 2045, according to Space.com. It would orbit the system for several years, studying the planet’s interior, atmosphere and magnetosphere, and touring its intriguing icy moons and thin rings.

How many moons does Uranus have?

The five largest moons of Uranus are Miranda, Ariel, Umbriel, Oberon, and Titania. Uranus also hosts a delicate ring system. It was first discovered in 1977 when astronomers watched the planet pass in front of a distant star and saw changes in the star’s light that indicated the rings’ presence, according to NASA.

Could there be life on Uranus?

NASA does not consider Uranus to be a place conducive to life as we know it. It’s possible that some of the planet’s larger moons are hiding enormous reservoirs of liquid water beneath their icy surfaces, which could potentially be habitable environments, according to Space.com.