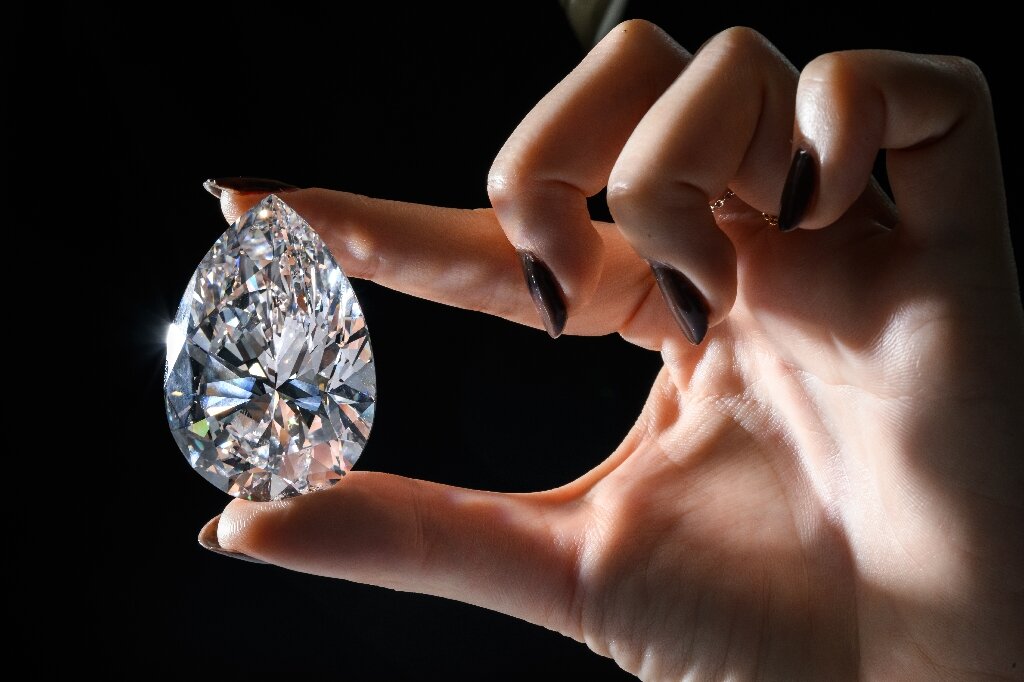 ‘The Rock’ diamond dazzles in Geneva

The biggest white diamond ever to be sold at auction, dubbed “The Rock,” will go under the hammer in Geneva on Wednesday and could fetch up to $30 million—or more.

The 228.31-carat stone is up for grabs alongside a historic intense yellow diamond associated for more than a century with the Red Cross, which will receive some of the profits from its sale.

The Rock is “a truly exceptional pear-shaped diamond,” said Max Fawcett, head of the jewels department at Christie’s auction house in Geneva.

It is “the largest white diamond ever to be offered at auction,” he told AFP at a preview on Friday.

The Rock is currently in the hands of an unnamed owner from North America.

It could even break records when it goes under the hammer.

“It’s perfectly symmetrical and is estimated at $20 to $30 million—and I expect there be fireworks on Wednesday,” Fawcett said.

The equivalent in euros is 19 to 28 million.

The expert said that there were only a handful of diamonds of similar size and quality to The Rock. The Christie’s record for a similar white diamond is $33.7 million, fetched in Geneva in 2017 for a 163.41-carat gem.

Larger than a golf ball, The Rock was extracted from a mine in South Africa in the early 2000s. It has been shown in Dubai, Taipei and New York ahead of the sale in Geneva.

Bidders will also be vying for The Red Cross Diamond, a cushion-shaped, 205.07-carat canary yellow jewel, which has a price estimate of seven to 10 million Swiss francs ($7.09 to $10.13 million).

“I expect that it will achieve much more on the day of sale,” said Fawcett.

A large chunk of the proceeds will be donated to the International Committee of the Red Cross, which is headquartered in Geneva.

The ‘Red Cross Diamond’ is among the largest diamonds in the world and bears the shape of a Maltese cross.

The original rough stone was found in 1901 in a De Beers company mine in South Africa and is said to have weighed around 375 carats.

As well as ranking among the largest diamonds in the world, a striking feature is its pavilion, which naturally bears the shape of a Maltese cross.

The stone was first put up for sale on April 10, 1918 at Christie’s in London. It was offered by the Diamond Syndicate in aid of the British Red Cross Society and the Order of St John.

It was sold again by Christie’s in Geneva in 1973, fetching 1.8 million Swiss francs, and is now being offered by the auction house for a third time.

“For nearly half a century, our family has had the privilege of safeguarding The Red Cross Diamond,” the gem’s anonymous private owner said in a statement.

Several other diamonds will be auctioned on Wednesday, plus a tiara that belonged to princess Irma of Furstenberg (1867-1948), a member of one of the most pre-eminent aristocratic families in the Habsburg Empire.

“The diamond market at the moment is very, very strong,” said Fawcett.

He said rising demand, supply constraints due to “geopolitical issues” and inflationary pressure on commodities, including precious stones, was pushing the market to highs not seen since its 2013-2014 peak.

The Russian invasion in Ukraine has had a major impact.

More than 40 percent of the world’s diamonds are mined in Russia, including the famous Alrosa mine, but international markets no longer have access to Russian gems, said Fawcett.

The supply constraint has created major price hikes and with the sanctions imposed on Moscow following the February 24 invasion, “prices will only continue to increase,” he said.