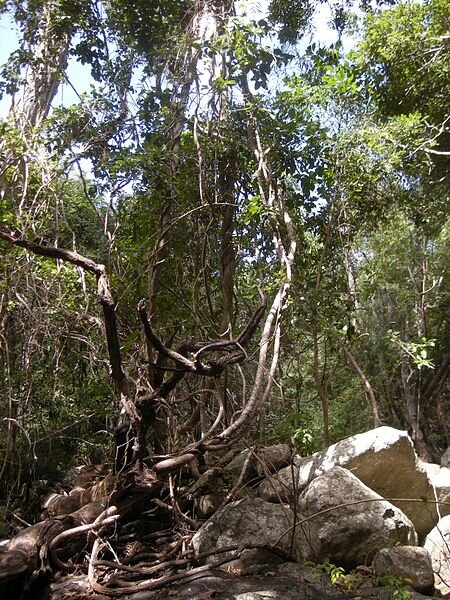 1. Keeping ‘climbers’ out of forests can help promote tree growth

When logging or storms disturb forests, they can regenerate on their own—but not without competition.

Fast-growing, invasive climbing plants, such as lianas or rattan, proliferate in forest clearings, often outcompeting native trees for sunlight, nutrients and other resources. Due to human activities that are driving forest destruction, these climbers are now super-abundant in many forests—and slowing native forest growth.

According to a new study in Ecology and Evolution, thinning these pesky plants from a forest area can more than double tree biomass growth—making climber-cutting a major new strategy for restoring degraded forests and increasing the carbon they absorb.

Although climbing plants are a natural part of ecosystems, they can start to overtake degraded forest areas. And these “carbon parasites,” as Griscom calls them, don’t store nearly as much carbon as the trees they are taking growing space from.

The good news: Culling climbers from forests in active tropical logging concessions would accelerate tree growth enough to sequester 2.3 gigatons of carbon dioxide annually—that would remove carbon emissions from half of the cars on Earth. This sequestration boost lasts at least 19 years after climbers are thinned—making this restoration technique “the gift that keeps giving,” said Griscom.

“Nevertheless, we still have much to learn as we begin to implement this method,” he added. “In particular, we need to better understand which climber species, and how many, can be removed from any given forest without negative impacts on biodiversity.”

Though they account for more than 60 percent of Earth’s ocean area, the high seas—international waters outside countries’ jurisdictions—are the least protected biome on the planet.

But new research published in Nature Climate Change could help change that by introducing a 3D approach to mapping potential marine protected areas (MPAs) in the open ocean.

The new model allows scientists to account for the various depths of the high seas and the seafloor—a factor not considered when establishing MPAs in shallow coastal areas.

“We need to stop thinking about the ocean as a two-dimensional map when it comes to conservation,” said Conservation International research scientist Isaac Brito-Morales, the study’s lead author. “Our approach allows us to observe the world’s oceans in their full three dimensions, observing depth zones and the seafloor as different layers of our complex marine system.”

Although the high seas are one of the least explored areas on Earth, recent surveys have revealed they harbor a trove of marine species. For example, an expedition in the international waters off Peru and Chile identified more than 120 unique species—from sea sponges to sharks—many of which are extremely fragile and live only in this remote region.

This new approach focuses on areas of the high seas that scientists expect will be most resilient to ocean warming, offering a “safe haven” for marine species that are seeking shelter from the impacts of climate breakdown, Brito said.

Protecting a portion of the high seas is critical to achieving the global goal of conserving 30 percent of land and sea by 2030. Without MPAs on the high seas, 75 percent of all national waters would need to be protected to achieve the “30 by 30” goal, which would pose a challenging and costly effort that could hurt fishing communities.

In April, long-awaited negotiations to establish the first-ever legal process for protecting the high seas stalled as United Nations member states failed to reach an agreement. The U.N. must now set a date for a new round of negotiations, likely in August.

“This new way of mapping the high seas could offer an important tool to protect marine life and fight climate change in one of the last frontiers on Earth,” Brito-Morales said.

3. In the Amazon, insects pay the price for the gold mining

Gold mining has skyrocketed in the Amazon basin in recent years—and it’s come at the cost of forests, accounting for as much as 90 percent of deforestation in some areas.

As these forests disappear, so do the habitats they provide for some of the smallest—and most vital—species: insects. According to a new study in Remote Sensing in Ecology and Conservation, the increase in gold mining across the Amazon is hurting many insect populations, from butterflies to wasps.

“When a forest is cut down to make room for a gold mine, many insects are left without food or places to breed,” said Anand Roopsind, a scientist at Conservation International and co-author of the paper.

“Also, artisanal gold miners use mercury to extract gold from the ground, and this highly toxic substance can leak into rivers, lakes and other water sources that sustain local communities and native wildlife.”

The scientists used satellites to map how land cover has changed as a result of gold mining in the Indigenous community of Campbelltown in central Guyana. They then visited multiple sites to survey the diversity of insects in the area. Pairing remote sensing data with field observation provided a cost-effective and rapid way to assess the area’s biodiversity.

The scientists found that open, sandy pits and ponds created by mining suited some species, such as ants and dragonflies. But disruptions to the habitats of pollinator and nectar-dependent species, such as lacewings and butterflies, significantly reduced the presence of those species. According to Roopsind, their disappearance could negatively impact surrounding ecosystems long after the mines are gone.

“Insects are the unseen backbone of a healthy forest ecosystem, pollinating trees that provide food for wildlife,” he said. “The new approach we used in this study could help assess the impacts of land-use changes on critical species such as insects—and show how extinction threats can jeopardize entire ecosystems.”