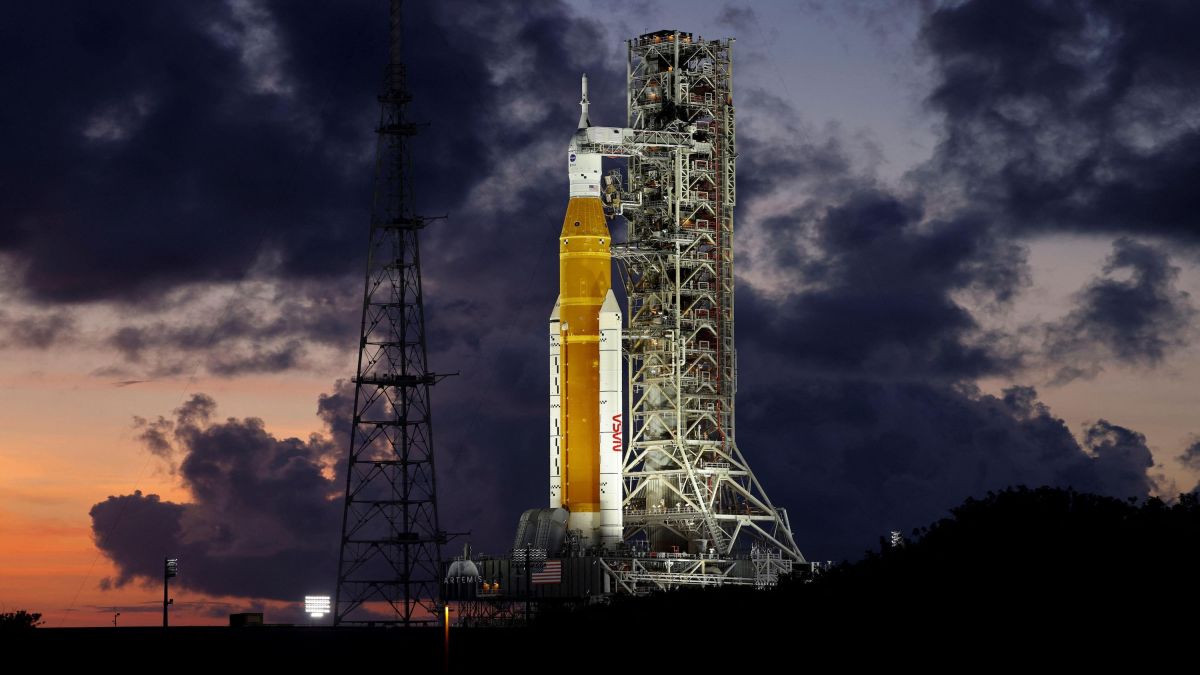 NASA’s enormous Artemis “mega moon rocket,” the most powerful space rocket ever built, has been cleared for yet another attempt to blast off to the moon on Wednesday (Nov. 16) after surviving 100 mph (161 km/h) gusts from Hurricane Nicole.

The $20 billion Artemis rocket, comprising the 30-story Space Launch System (SLS) and the Orion capsule, is scheduled to take off from Launch Pad 39B at NASA’s Kennedy Space Center in Florida at 1:04 a.m. ET on Wednesday.

This will be the fourth time that NASA has tried to launch the rocket. The first two attempts were scrubbed due to a spate of technical issues, including a hydrogen leak and a suspected faulty temperature sensor inside one of the rocket’s core stage engines. Then Hurricane Ian, which struck Florida in late September, forced NASA to roll the rocket back to the safety of Kennedy Space Center’s Vehicle Assembly building, canceling the third launch.

The fourth launch was threatened by another storm — Hurricane Nicole — but NASA chose to leave the rocket on the launch pad until the gales abated rather than risk missing the current launch window. After a two-day delay and sustaining only superficial damage from the winds, the rocket has been declared fit to fly.

“Right now, there’s nothing preventing us from getting to the 16th,” Jim Free, NASA’s associate administrator for exploration systems development, said at a Nov. 11 news conference. “If we didn’t design it to be out there in harsh weather we picked the wrong launch spot.”

The Artemis 1 mission is an uncrewed test flight of the spacecraft powering NASA’s Artemis moon program, which is set to send humans back to our nearest natural satellite and then hopefully onward to Mars. After the rocket leaves Earth’s atmosphere, the spacecraft’s boosters, which generate up to 8.8 million pounds (3.9 million kilograms) of thrust, will fall away, and the Orion module will zip 40,000 miles (64,000 kilometers) beyond the moon before swinging back to Earth.

The SLS is the largest NASA rocket since the Apollo program’s Saturn V rocket, and is made up of a liquid hydrogen and oxygen core booster with two smaller rocket boosters attached to its sides. For the Artemis 1 flight, the rocket will send the Orion capsule on a six-day, 69 mile-high (111 km) flyby of the moon’s surface, during which NASA engineers will gather data on the module’s trajectory and the effects of low gravity on the three mannequins on board.

Then, upon Orion’s dramatic return through Earth’s atmosphere at 32 times the speed of sound, NASA will put the capsule’s ablative heat shield to the test. The extreme air friction and Orion’s parachute should safely slow the spacecraft to just 20 mph (32.2 km/h), after which it will plop down in the Pacific Ocean off the coast of Baja California, Mexico.

The Artemis 1 test flight will enable NASA scientists to make vital observations and tweaks before Artemis 2 embarks upon the same journey with a human crew in 2024. Then, in 2025, the Artemis 3 mission will carry the first woman and the first person of color to land on the moon.

“This time we’re going not just to touch down [on the moon] and leave after a few hours or a few days — we’re going back to learn, to live, to work, to explore, to determine is there water; therefore on the [moon’s] south pole that would mean we have rocket fuel, we have a gas station up there,” NASA administrator Bill Nelson told BBC Radio 4. “This time we’re going to learn how to live in that hostile environment for long periods of time, all with the purpose that we’re going to Mars.”

Coverage of the launch will be available through the NASA mobile app and the agency’s official website.