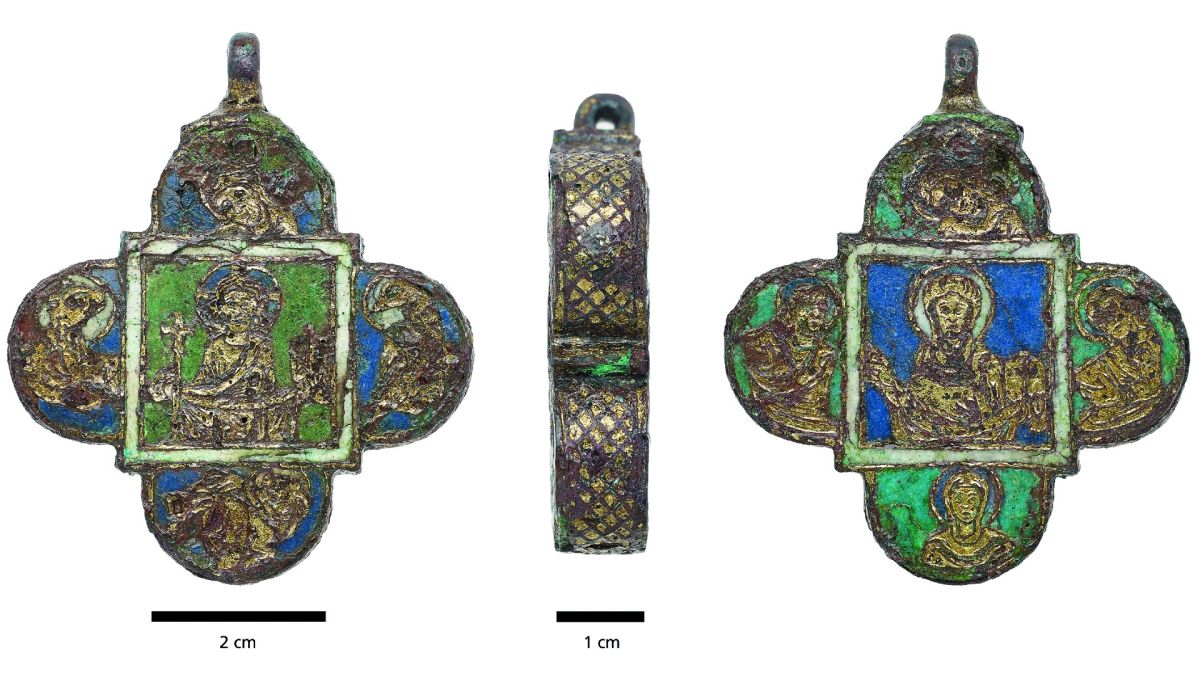 Medieval pendant found in a garbage pit may hold the

For 900 years, a corroded medieval pendant discovered in a trash heap in Germany has been hiding a religious treasure: tiny fragments of bone, possibly from the body of a saint, a new study has found. And further studies might reveal which saint it was.

Such medieval “reliquaries” — containers or shrines for the bones or other relics of saints — often contain a strip of parchment or paper with the saint’s name — known as an “authentic” or “cedula.”

But the researchers have yet to find one, study first author Matthias Heinzel (opens in new tab), a restorer at the Leibniz Center for Archaeology (LEIZA) in the German city of Mainz, told Live Science in an email.

That doesn’t mean it’s not there, however. To peer inside, the team used neutron tomography, which creates three-dimensional images when subatomic neutrons are  absorbed by materials — in this case, the pendant’s case and anything it contained. And although this technique didn’t reveal an authentic, further imaging could show such a strip and perhaps the letters written on it. “Maybe we will find it out in the next years with other instruments and higher resolution,” Heinzel said. “Who knows? We will try it.”

Related: Early-medieval woman was buried with a rare item: a metal folding chair

The study describing the investigation of the pendant (opens in new tab) was presented at the Metal 2022 conference (opens in new tab) of the International Council of Museums’ Committee for Conservation, which was held in Helsinki in September; it has yet to be published in a peer-reviewed journal.

The pendant was heavily corroded when it was discovered in 2008 during excavations of a medieval rubbish pit in the German city of Mainz. Left is the corroded pendant in a four-leaf clover/cross shape. Right is an X-ray image of the pendant. (Image credit: Photograph by Matthias Heinzel/LEIZA; Radiography by Stephan Patscher/LEIZA)

Archaeologists uncovered the palm-size pendant in 2008, during the excavation of a medieval rubbish pit in Mainz.

The pit was located in a court at a noble palace that dated from the High Baroque period in the early 17th century. Though it contained mostly pottery, the pendant was found in a layer of the pit that dated to the 14th century, before the later palace was built over it, Heinzel said.

However, the distinctive artistic style of the pendant suggests that it dates to the 12th century, and that it was already old when it was thrown away, he said. Its style also indicates that it was probably crafted in the workshop near the city of Hanover, about 175 miles (285 kilometers) north of Mainz, that is known to have made similar objects.

X-rays were absorbed by the metal of the pendant and couldn’t show the organic materials inside; instead, neutron tomography was used to reveal it held five small cloth bags containing fragments of bone. (Image credit: Burkhard Schillinger/MLZ)

Heinzel and his colleagues at LEIZA spent about 500 hours removing a thick layer of corrosion with diamond-tipped grinding tools and other fine mechanical devices to reveal a “quatrefoil (opens in new tab)”-shaped pendant of copper covered with gold leaf and enamel images of Jesus, Mary and medieval saints.

A conundrum quickly emerged: The pendant seemed hollow, but opening it would destroy it — so how would they look inside? They decided to take X-rays, which revealed a cavity within the pendant.

However, the metal and enamel of the pendant absorbed most of the X-rays, and nothing else was visible, Heinzel said.

“In X-ray images, organic and inorganic materials, such as textiles and bones, are optically outshone by the surrounding metal and enamels,” he said. But “neutrons show an almost contrary absorption behaviour to X-rays.”

The researchers hope that further imaging with neutron tomography will reveal a strip of parchment or paper inside the pendant, with letters they can read that state which saint the bones are from. (Image credit: Burkhard Schillinger/MLZ)

Unlike the energized electrons used in X-ray techniques, neutrons have no electric charge and can penetrate deep into materials, such as metals.

When the researchers examined the cavity of the pendant with neutron imaging, they could see clearly that it contained five small bags — probably of linen or silk — that held fragments of bone, Heinzel said.

The discovery shows the pendant was a phylactery — a type of amulet — that housed saintly relics and was supposed to give protection to those who wore it. That was a revelation to Heinzel, who wasn’t expecting to find human bone, although he’d already spent hundreds of hours restoring it. “From the beginning this was a really great object from the Middle Ages for me,” he said.

The next stage will be to use neutron imaging to search for the parchment or paper strip inside the pendant that could reveal the name of the saint whose bones it contains.

So far, the pendant has been exposed to imaging neutrons for a total of just over 7 hours.

Schillinger is hopeful that further observations with neutrons could reveal the strip and any letters on such a strip, which were probably written in iron gall ink — a mixture of iron salts and acids from vegetable sources. “Maybe double the [exposure] time, maybe triple” will divulge the saint’s name, he said.

Editor’s note: Updated at 12:44 p.m. EST to note that neutrons are strongly scattered by by hydrogen atoms, not readily absorbed as was previously stated.