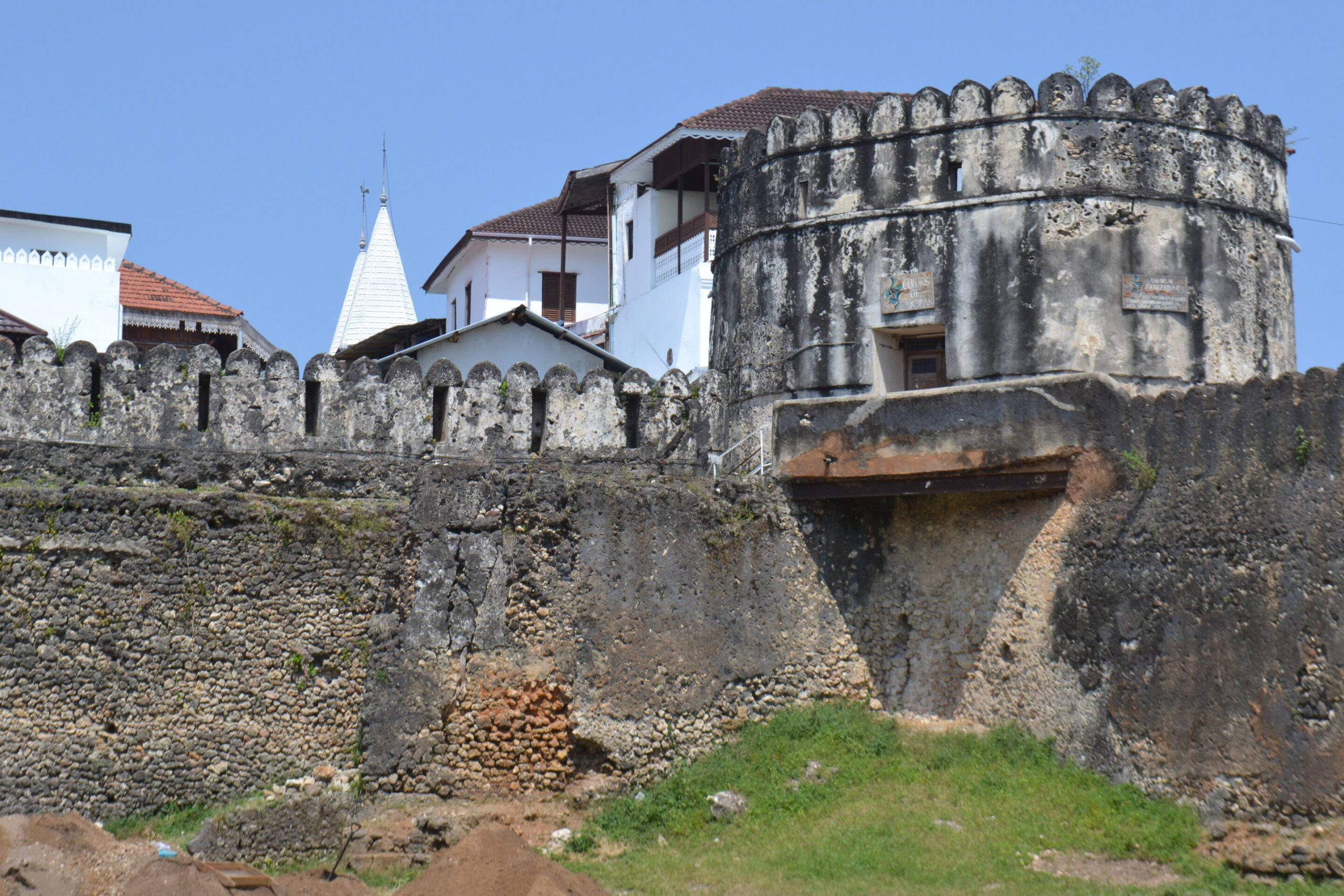 Historic graffiti made by soldiers sheds light on Africa maritime

The southwestern tower of Zanzibar Fort, in which many of the ship graffiti are located. Credit: Alessandro Ghidoni

Historic graffiti of ships carved in an African fort were drawn by soldiers on guard duty watching the sea, University of Exeter experts believe.

The engravings, found in Tanzania’s Zanzibar archipelago and made in the mid to late nineteenth century, open a window onto the ships that sailed on the western Indian Ocean at the time.

They were made when the area was the southern terminus of a trans-oceanic trade network that used the monsoon winds. Vessels anchored, beached and unloaded their cargoes along the length of the waterfront just outside the Old Fort, or Gereza, of Stone Town, Zanzibar’s capital.

Although sometimes sketchy, the images suggest a number of vessel types, including a European-style frigate or frigate-built vessel and a number of settee-rigged ocean-going vessels often called ‘dhows’. Some appear to have transom sterns, hinting at particular types of ship such as the baghla, ghanja, sanbūq or kotia. Two might also depict the prows of the elusive East African mtepe—a ship that was sewn together, rather than being nailed.

All of the graffiti depict ships that would have been easily visible from the ramparts of the fort itself or by stepping a few paces outside its door.

In the eighteenth century, the rulers of Oman began to develop the Gereza as one of their main fortifications in the region. From it they oversaw and controlled the trade in raw materials and enslaved people from the African interior passing through Zanzibar. Having developed spice plantations on the archipelago, they subsequently shifted their political base from Arabia to Zanzibar. The fort was abandoned in the nineteenth century.

The most detailed and intriguing image among the graffiti is a rendition of a three-masted frigate or frigate-built vessel such as a corvette. Frigate-built and other square-rigged ships from Western powers visited Zanzibar during this time, but the Omani navy also had a number of their own.

The settee- or lateen-rigged vessels depicted in the graffiti may also represent Omani ocean-going merchant vessels participating in the monsoon-based trade, or non-Omani trading craft arriving from Yemen, the Arabian-Persian Gulf or India.

The drawings are unlike those found elsewhere in East Africa in that they are not set on the outside of a mosque or within domestic spaces. This suggests they didn’t have a spiritual or religious function. Instead they were mostly set on the ramparts of the fort, suggesting that they were made by soldiers on guard duty.

A graffito in the southwestern tower of the fort showing a vessel with high quarter deck and settee rig, typical of Indian Ocean ships at the time. Credit: John P Cooper & Alessandro Ghidoni

The study, by John P. Cooper and Alessandro Ghidoni from the University of Exeter, is published in the journal Azania: Archaeological Research in Africa.

“Similar graffiti has been reported elsewhere in Oman, suggesting a relatively widespread practice of inscribing ship graffiti within Omani military buildings,” Professor Cooper said. “Set within the fort, the Gereza graffiti were not for public consumption in the way that they might have been had they been on the fort’s outer faces, where people flocking to the busy Soko Uku market under its walls might have seen them, as would the families of Arab and Indian merchants and notables who built their houses around the fort

“The graffiti must have been made for and by members of the community of the fort itself. Those in the southwest tower and the western ramparts of the Gereza must have been made by people with access to these more reserved upper reaches of the fort, probably Baluchi or slave soldiers garrisoned in the fort by Omani or Zanzibari sultans for much of the nineteenth century. They were probably made by people with time on their hands, soldiers on guard duty or spending their leisure time in the breezier upper reaches of the building. The Baluchi soldiers would themselves have arrived, and ultimately departed, by such ocean-going craft.”

Citation: Historic graffiti made by soldiers sheds light on Africa maritime heritage, study shows (2022, May 6) retrieved 22 May 2022 from https://phys.org/news/2022-05-historic-graffiti-soldiers-africa-maritime.html