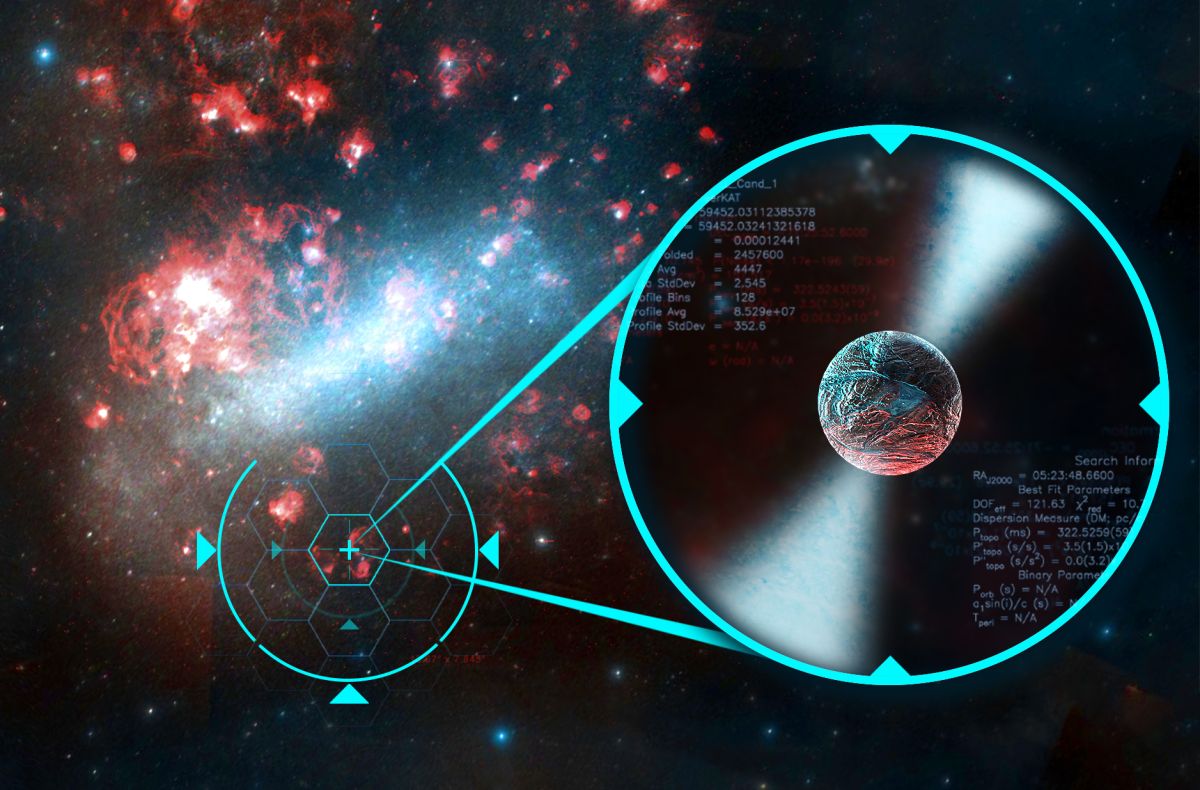 Distant ‘galaxy’ isn’t a galaxy at all — but one

A speck of light that scientists once wrote off as a distant galaxy may actually be the brightest pulsar ever detected outside the Milky Way.

Named PSR J0523−7125 and located about 160,000 light-years from Earth in the Large Magellanic Cloud (a satellite galaxy that orbits the Milky Way), the newly-defined pulsar is twice as wide as any other pulsar in the region, and 10 times brighter than any known pulsar beyond our galaxy. The object is so big and bright, in fact, that researchers originally interpreted it as a faraway galaxy — however, new research published May 2 in the Astrophysical Journal Letters suggests that this is not the case.

Using the Australian Square Kilometer Array Pathfinder (ASKAP) radio telescope in Western Australia, the study authors looked at space through a special pair of “sunglasses” that block all wavelengths of light except for a specific type of emission associated with pulsars, the highly magnetized husks of stars. When PSR J0523−7125 showed up bright and clear in the results, the team realized they weren’t looking at a galaxy at all, but at the pulsing corpse of a dead star.

“This was an amazing surprise,” lead study author Yuanming Wang, an astrophysicist at Australia’s Commonwealth Scientific and Industrial Research Organization (CSIRO) said in a statement. “I didn’t expect to find a new pulsar, let alone the brightest. But with the new telescopes we now have access to, like ASKAP and its sunglasses, it really is possible.”

Pulsars are highly magnetized, rapidly spinning remnants of exploded stars. As they rotate, streams of radio waves erupt from their poles, pulsing like lighthouse beams as those radio waves flash toward Earth.

The radio waves emitted by pulsars are different from many other cosmic light sources, in that they can be circularly polarized — that is, the light’s electric field can rotate in a circle as it propagates forward. This unique polarization can provide scientists with a big clue in the tricky game of distinguishing pulsars from other distant light sources. In their new study, researchers used a computer program to filter out circularly polarized light sources from an ASKAP survey of pulsar candidates.

The team found that the presumed galaxy PSR J0523−7125 was emitting circularly polarized light, meaning it is almost certainly a pulsar. And because pulsars are incredibly small — typically packing a sun’s worth of mass into a ball no wider than a city — that means the object must be much closer, and much brighter, than scientists previously thought. Indeed, if this pulsar lurks in the nearby Large Magellanic Cloud, as the researchers suspect, then it is the single brightest pulsar ever found outside the Milky Way.

That exceptional brightness explains why the object was misidentified as a galaxy after its initial detection, the researchers said. And by filtering out circularly polarized light from future star surveys, researchers may be able to unmask even more unusual pulsars that are hiding in plain sight.

“We should expect to find more pulsars using this technique,” study co-author Tara Murphy, a radio astronomer at the University of Sydney in Australia, said in the statement. “This is the first time we have been able to search for a pulsar’s polarization in a systematic and routine way.”