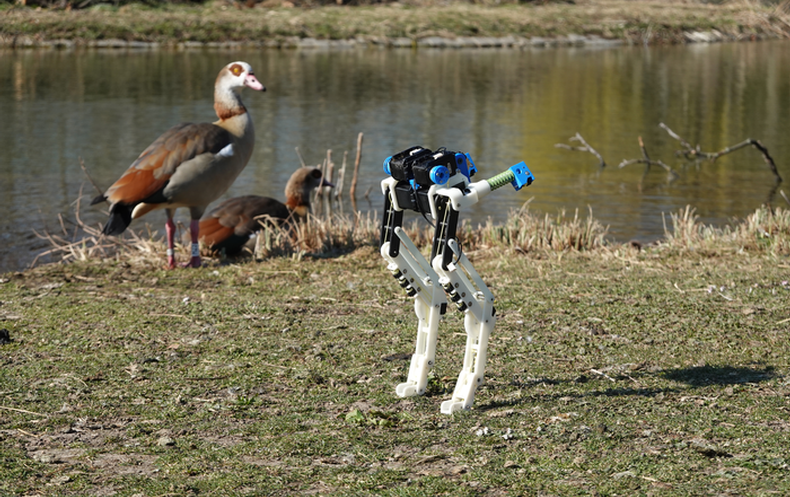 Alexander Bardi-Spröwitz has seen more dissected ostriches than the average engineer. Twelve years ago the researcher, now at the Max Planck Institute for Intelligent Systems in Stuttgart, Germany, was attempting to design a legged robot based on bird biology. The trouble was that most biologists do not describe animal anatomy in engineering-friendly terms. “It’s not their goal to build a robot,” Bardi-Spröwitz notes. “It’s a bit frustrating for me as an engineer because I need certain types of information.”

Then he met Monica Daley, a veterinary scientist then at the Royal Veterinary College in England, who offered him a postdoctoral position alongside her veterinary students. “That got me thinking about how we use our understanding of locomotion and animals to develop more agile robots,” Daley says. Now this combination of veterinary experience and hard robotics has paid off. The two researchers, along with members of Bardi-Spröwitz’s lab, have created BirdBot—a bipedal machine that may one day explore terrains such as dense forests, where wheeled or treaded robots cannot move. Their results were described in Science Robotics on March 16.

For roboticists, birds make a particularly interesting point of study because they, like humans, walk upright on two legs. “Given that there are around 10,000 living species of bird and only one species of human, birds have a lot to offer us in understanding how bipedalism can work,” says Peter Bishop, a biomechanics researcher at Harvard University’s Museum of Comparative Zoology, who was not involved in BirdBot’s creation.

This kind of information is vital for those who want to replicate bipedal locomotion. Doing so “is quite hard because there are lots of very harsh impacts,” Bardi-Spröwitz explains. “It’s as if you were to continuously land an airplane.” When a running foot hits the ground, it lands with a force up to three times the runner’s body weight; even walking multiplies impact force by about 1.5. A bipedal bird (or avian-inspired robot) not only has to deal with such repeated collisions; it must also be able to balance on one foot.

To keep BirdBot upright while moving, the team engineered a spring-loaded system capable of rapidly switching between an extended and flexed limb position. “The key point was to think of the foot as the mechanical trigger to switch between those two states,” Bardi-Spröwitz says. Like humans, birds have muscles and tendons that stretch over multiple joints, forming a pulleylike structure that can automatically move the connected bones in certain ways. But unlike human legs, which max out at having two joints connected this way, a bird limb’s muscles and tendons can span up to five joints. BirdBot uses a five-joint network that mimics the leg motion of a flightless bird, such as an ostrich, as it runs in the wild.

This setup offers an advantage by allowing the bird’s leg to move faster than its nervous system can operate. Though nerve impulses might seem instantaneous, they take some time to travel from brain to muscle. But with a five-jointed muscle network, a bird does not have to signal each muscle independently. It simply moves one, and the whole system fires. “It’s kind of like the puppet master controlling everything from the top,” Daley says. For Bardi-Spröwitz’s team, the arrangement eliminated the need for a lot of complicated balance and pressure sensors in BirdBot’s legs. This makes the robot sleeker, easily scalable in size and about 75 percent less power-intensive, compared with similar-sized robots.

“What they’ve shown is that, by using this by stable joint, you have a very elegant way to be energy efficient,” says biomechanical engineer Markus Heller of the University of Southampton in England, who was not involved in the BirdBot project. “And you have that without the need of a very complex control mechanism.”

Bishop says the project is “awesome science at its best.” But he sees room for improvement in future BirdBot designs. For example, the current version of the robot is only able to move along one plane: forward and backward but not sideways. “All the limb joints are simple hinges, so the robot is more like ‘2.5-D,’” he says (as opposed to fully three-dimensional).

Bardi-Spröwitz hopes to address this limitation in later iterations. Ideally, he envisions avian-inspired robots lending humans a hand (or foot) in forestry and sustainable agricultural practices. Some farms already employ autonomous tractors to help till fields and spray crops, but these wheeled bots are all but useless on uneven or densely wooded terrain. “Legged robots can overcome those obstacles where wheeled robots are currently blocked,” Bardi-Spröwitz says. This would allow them to weed complex interculture farms, for example, or to traverse deep into forests to monitor downed trees.

Such research may also bring biologists and engineers closer to understanding the intricacies of birds’ bodies—and our own. “We visited the moon 50 years ago,” Heller says. “But if you ask us today, ‘How does a knee really work?’ I think we’re still not quite sure about all the details of that.”