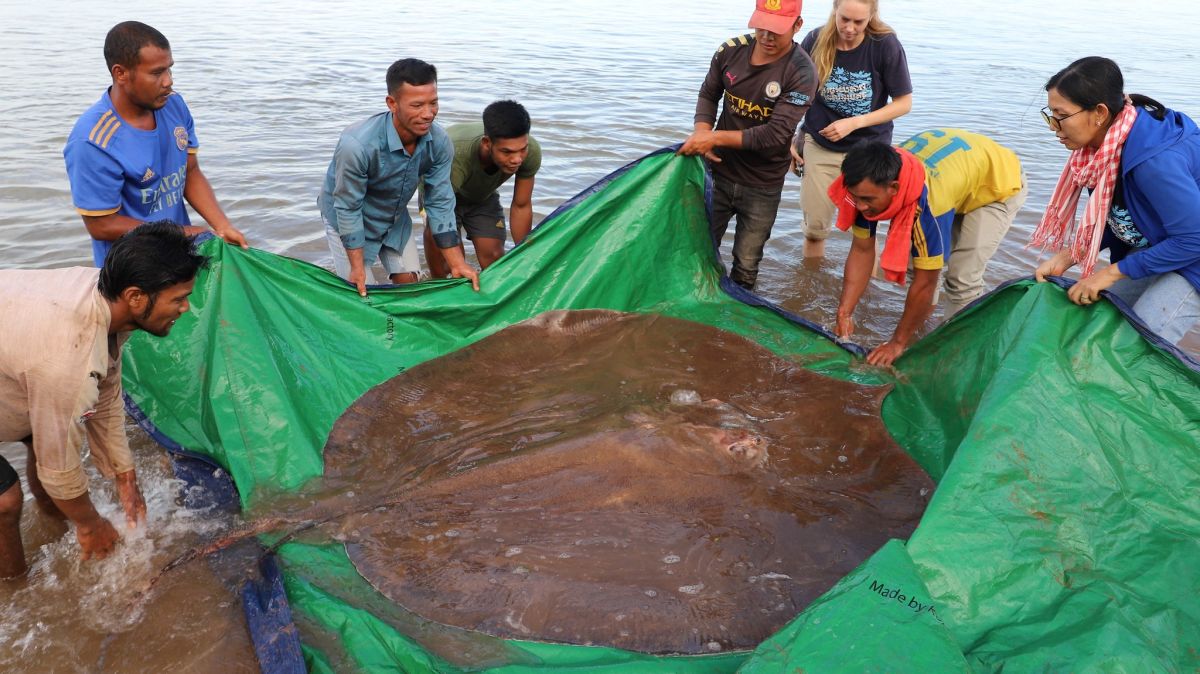 Fishers in Cambodia recently received a massive surprise when they reeled in a gigantic 400-pound stingray. The hefty ray was dragged up from the murky depths of the Mekong River after it swallowed a fish that had already been snagged on the fishers’ line.

The monstrous ray, which has been identified as a giant freshwater stingray (Urogymnus polylepis), was accidentally caught by locals on May 5 in the Stung Treng province in northeastern Cambodia. The fishers immediately alerted team members from the Wonders of the Mekong project — a conservation group run by the University of Nevada, Reno (UNR), in collaboration with local fishing authorities — who helped remove the fishing line and measure the ray before safely releasing it back into the river.

The massive specimen weighed a hefty 397 pounds (180 kilograms) and measured 6 feet (1.9 meters) wide and 13 feet (4 m) in length including its whip-like tail, which terminated in a 6 inch (15 centimeter) venomous, serrated barb, UNR representatives said in a statement.

Related: 7-foot ‘monster’ sturgeon found in Detroit River could be over 100 years old

Little is known about these remarkably large fish because “catches are almost never reported,” Hogan said, “which also makes it difficult to determine true abundance or population trends.”

However, past reports suggest that individuals can grow even bigger than this behemoth. “The size of this stingray was surprising,” Hogan said. “But what’s more surprising is that it’s dwarfed by accounts of [individuals] twice the size reported by fishermen in the same area.”

The current record-holder for the largest fish in the Mekong River — which flows through China, Myanmar, Laos, Thailand, Cambodia and Vietnam — is a 646-pound (293 kg) Mekong giant catfish (Pangasianodon gigas) that was caught in Thailand in 2005, Hogan said. Giant freshwater stingrays can likely grow larger than this, he added. In 2009, a giant freshwater stingray caught in Thailand was estimated to weigh between 550 and 770 pounds (249 and 349 kg) but was never officially weighed.

The 400-pound giant freshwater stingray in the net. (Image credit: Wonders of the Mekong project)Image 2 of 3

The team measure the stingray on land to establish an accurate body length. (Image credit: Wonders of the Mekong project)Image 3 of 3

The team take pictures with the ray before releasing it into the river. (Image credit: Wonders of the Mekong project)

The largest freshwater fish in the world are beluga sturgeon (Huso huso); these enormous fish, which are found in Russia, can reach a maximum length of more than 26 feet (8 m) and weigh up to 2.2 tons (2 metric tons).

The Mekong River is also home to a number of other large aquatic species, including Irrawaddy dolphins, giant softshell turtles, Mekong giant catfish, giant barbs (a type of carp), giant goonch catfish and giant sheatfish (another type of catfish), according to the statement. “This remote and relatively pristine stretch of the Cambodian Mekong River appears to be the last place on Earth where all of these iconic giant freshwater species live alongside one another,” Hogan said.

These giant species are able to grow to extreme sizes because the Mekong River has a wide variety of different habitat types including deep pools, braided channels, sand bars and islands that “provide refuge and space for the species to grow,” Hogan said. Historically, the Mekong River is one of the “most productive rivers in the world” and would have provided an abundance of food for larger animals, he added.

However, the health of the Mekong River has seriously declined in recent decades due to water pollution, overfishing and habitat fragmentation due to river developments, such as dams, Hogan said. As a result, giant freshwater rays are now listed as endangered, according to the International Union for Conservation of Nature (IUCN) Red List of endangered species.