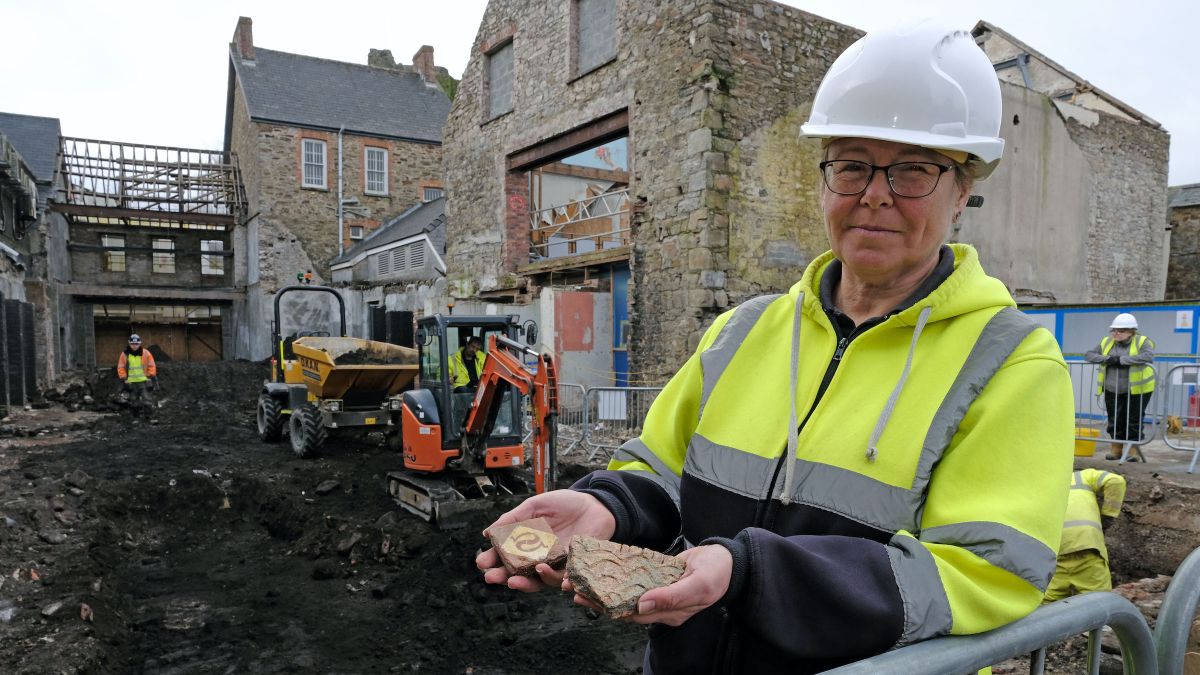 “The friary was in existence from the mid-1200s until the dissolution in 1536-1541,” Fran Murphy, the head of archaeological services at Dyfed Archaeological Trust, the organization that is excavating the site, told Live Science.

During the friary’s last years, Henry VIII, king of England and Wales, ordered the confiscation and sale of many church properties when he broke away from the Catholic Church.

The medieval friary of St. Saviour’s was no exception; the crown sold the property, but part of it, the friary’s burial ground, remained intact and was used well into the 17th century, Murphy said. Due to the burial ground’s high capacity, the identity of the 17 skeletons is unclear.

“We do not know whether the skeletons are of friars, as we know many different people are often buried within monastic cemeteries,” Murphy told Live Science in an email. He noted that excavations are ongoing, and a detailed osteological study of the skeletons has not been conducted yet.

A close-up photo of a floor tile found during the excavation in Pembrokeshire, Wales. (Image credit: Pembrokeshire County Council)

“The burials do not contain grave goods” Murphy added, noting that this fits with medieval Europeans’ Christian beliefs that “nothing can be taken with you into the afterlife.” The burials do have shrouds on them, and the skeletons were found with their arms wrapped across their chests.

The friary itself is about 131 feet (40 meters) long and 39 feet (12 m) wide, and it had floor tiles that were manufactured in the Malvern area of England, Murphy said. Remains from later time periods, such as an iron foundry from the 19th century, have also been found at the site.

Friaries were popular places to be buried during the Middle Ages (roughly A.D. 500 to 1500). “The friary churchyards were originally intended for the male friars themselves, but they quickly became popular places for lay people to be buried,” said Nick Holder, an honorary research fellow at the University of Exeter who wrote the book “The Friaries of Medieval London: From Foundation to Dissolution” (Boydell Press, 2017).

“If they [the burials] all turn out to be men, these are probably the burials of friars,” Holder told Live Science in an email. “If there are women and children as well, these will be lay people who paid small sums to be buried here.”

The friary of St. Saviour’s was used by Dominican friars, who were also known as the “Black friars” because of the color of their clothing. They “were very visible members of the medieval Catholic Church,” Holder said, noting that “unlike monks and nuns, who were enclosed in their monasteries, friars were preacher-monks based in towns who would preach to townsfolk, in their friary churches and in the streets.”

Historical records indicate that in the decades before the dissolution of monasteries and friaries in England and Wales, the St. Saviour’s friars had a sizable amount of debt and had to rent out some of the buildings around the friary, Deirdre O’Sullivan, a lecturer in archaeology at the University of Leicester, wrote in the book “Burial of the Christian Dead in the Later Middle Ages” (Oxford University Press, 2013).

The excavations are being carried out prior to a construction project taking place. A three-story food emporium with a bar and rooftop terrace are due to be constructed in the area.