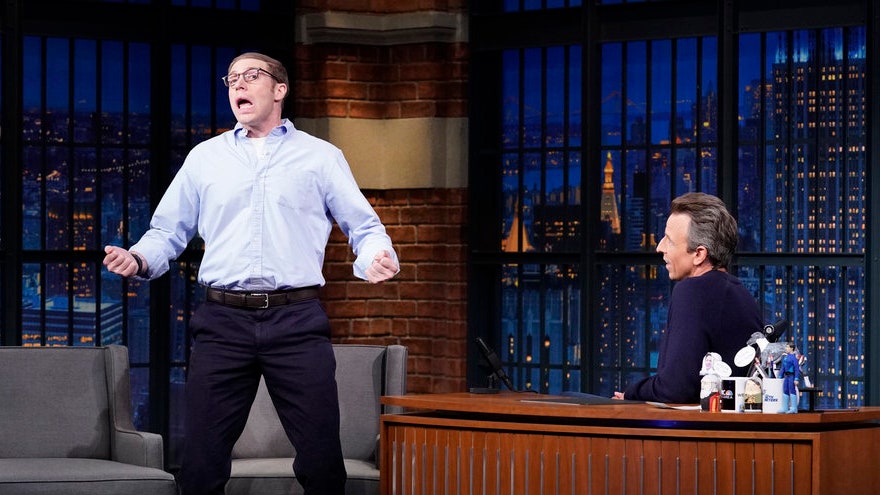 Joe Pera was a guest on the most recent episode of Late Night With Seth Meyers, where he chatted about his upcoming tour, rehearsed a scripted scene with Seth Meyers, and imitated screaming “like an anime guy.” Pera also joked that his next career move is starring as James Bond in place of Daniel Craig and showed teaser clips from the film. “They decided why not a celibate, American James Bond?” he said. “The new angle they’re taking is that James Bond lives in Philadelphia, he eats pre-wrapped Boar’s Head sandwiches for breakfast and lunch, he’s learning to play the guitar off of YouTube, and he’s very afraid of dogs.” Watch the full interview below.

Earlier this month, Pera revealed that his beloved Adult Swim comedy show Joe Pera Talks With You was not renewed for a fourth season. The show launched in 2018, consisting of short episodes set in small-town Michigan. “I am writing to share the unfortunate news that Joe Pera Talks With You is over for now,” Pera wrote in a statement at the time. “A sincere thank you to everyone who made the show possible. To the many people who worked on it and gave so much of their talent and hard work to it.”

Revisit “What Joe Pera Is Listening to Right Now” and “Why This One Episode of Adult Swim’s Joe Pera Talks With You Is a Must-Watch for Music Obsessives” on the Pitch.