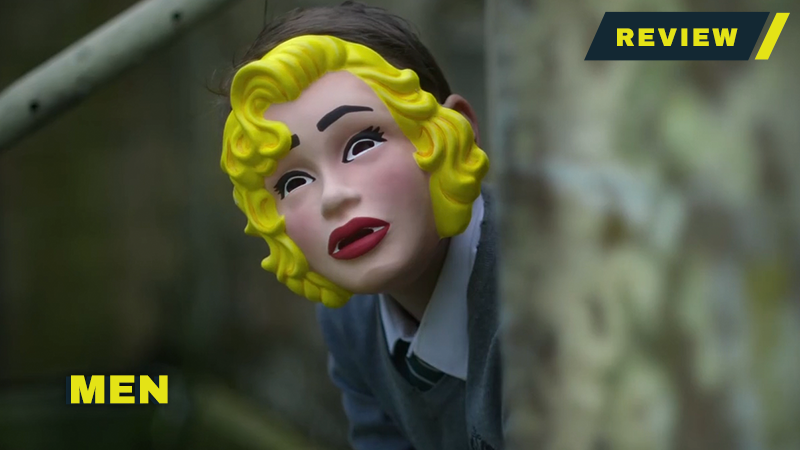 Alex Garland is a director of danger. In 2014, he made Ex-Machina, a thriller about the dangers of artificial intelligence. In 2018, he made Annihilation, a sci-fi film about the dangers of self-destruction. In 2022, Garland returns to helm his third feature, and this time, he’s making a movie about the most dangerous subject matter yet: Men.

This horror film stars Jessie Buckley as Harper, a woman who moves into a new house following a recent tragedy and is stalked and haunted by someone or something from the surrounding woods. This is a well-directed horror movie with flaws in its execution that still succeeds in its creepy ambitions.

The best thing about horror movies is their versatility; they can be combined with action, sci-fi, and psychological thrillers, they can have ghosts and masked killers, and they can be used for social commentary. In the instance of Men, it is the latter, as we have a movie that aims to highlight gender and the issues women face. The protagonist, Harper, is introduced early in the film, watching her husband fall off a building. The movie does an excellent job of using her backstory to establish the film’s themes with well-placed flashbacks that take a look at her painful relationship with him.

Harper is a fascinating protagonist, as the movie illustrates her as a sympathetic character. Seeing her deal with pain in her past leads to a journey you can get invested in as she navigates her trauma while trying to move on. Garland tells this story with a fascinating lens as she interacts with multiple men throughout the village. These men are portrayed by Rory Kinnear, whose performances are so distinct that some may even miss that they are all done by the same person. Every man she encounters in the film feels like an extension of her past experiences, all with the same face. It’s an intriguing way to display what Harper deals with. Beyond all of that, this is a horror movie. The first two acts’ scares come from the unnerving suspense. Garland does a superb job helming the horror, writing his scenes, and framing his shots in ways that allow the audience to be in Harper’s shoes while also staying one step ahead of her. The film takes a turn with a third act that relies more on body horror and an uncomfortable amount of gore. This turn was unexpected and didn’t feel entirely earned. It’s where the movie finds itself at its most metaphorical, and it may lose audiences during these moments as they cover their eyes with one hand and scratch their head with the other.

At times, it can feel like the movie is only scratching the surface of what it wants to say, not finding ways to tell its story in ways that feel satisfying for the audience. As a result, the movie leaves a lot unresolved, but part of that is what makes the film so interesting. Horror movies can be disposable and forgettable, but Men is a memorable, suspenseful horror movie with phenomenal performances from Buckley, Kinnear, and Paapa Essiedu. Garland’s motifs could use a little more work, as this is the least impressive of his directorial efforts, but he has skill on the page and behind the camera that is displayed in this captivating thriller.

As ComingSoon’s review policy explains, a score of 7 equates to “Good.” A successful piece of entertainment that is worth checking out, but it may not appeal to everyone.

Disclosure: Critic attended a press screening for our Men review.