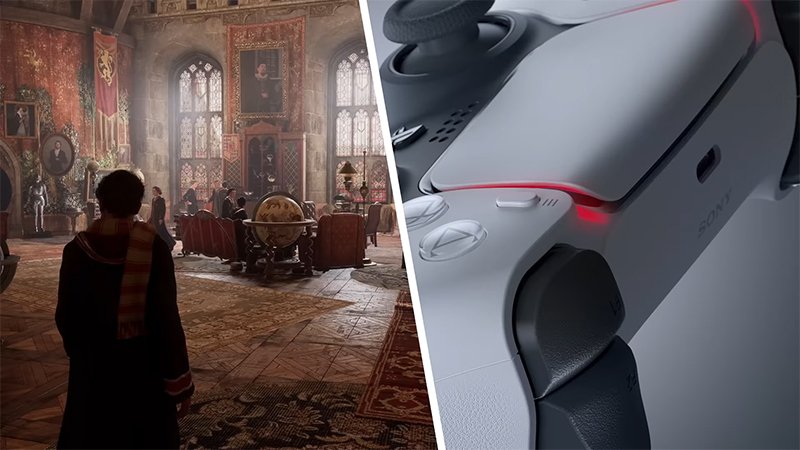 Upcoming open-world Harry Potter adventure Hogwarts Legacy is set to be a huge release for Warner Bros. Interactive Entertainment when it comes out this holiday. And while it is set for a whole host of platforms, it’s also coming to the PlayStation 5. While not nearly as rich as the game’s March showcase, WB Games Avalanche Community Manager Chandler Wood recently took to the PlayStation Blog to talk about what that means for those PS5 owners, detailing how the game will take advantage of the console’s unique controller and other platform-specific features.

Wizards attending Hogwarts tend to hold their wands in their right hand. This isn’t just because the developers are biased against lefties, it’s so that they can project the feeling of launching spells through the DualSense all on the same side of the controller. The R2 button will resist against players as they cast powerful magic, and the right grip will rumble in time with deflections and charms firing off in-game. This also extends past spellcasting into catching balls on the Quidditch court, mixing potions, or listening to the rumbling screech of a fantastic beast.

In a less technically impressive but still notable feature, the DualSense controller will light up while playing Hogwarts Legacy in line with whatever house the Sorting Hat chooses for you. Whether you’re saving the world as a Gryffindor or getting lost on the way to lunch from Hufflepuff’s basement common rooms, your controller will match your magical career. It will pulse blue and bronze for Ravenclaw, scarlet and gold for Gryffindor, green and silver for Slytherin, and yellow and black for Hufflepuff.

MORE: The Lord of the Rings: Gollum Release Date Revealed for Later This Year

Finally, Hogwarts Legacy will support those who have shelled out for a 3D audio setup. Each environment is described as having a “detailed soundscape,” meaning that the game will do its best to match the surround sound adventure you remember from watching Harry and Voldermort battle it out on the silver screen. Audio will also erupt from the DualSense’s speaker at certain times, further augmenting how the magic affects the controller. There will also be two modes on PS5 (and presumably Xbox Series X|S): one that prioritizes frame rate and one that boosts visual fidelity.