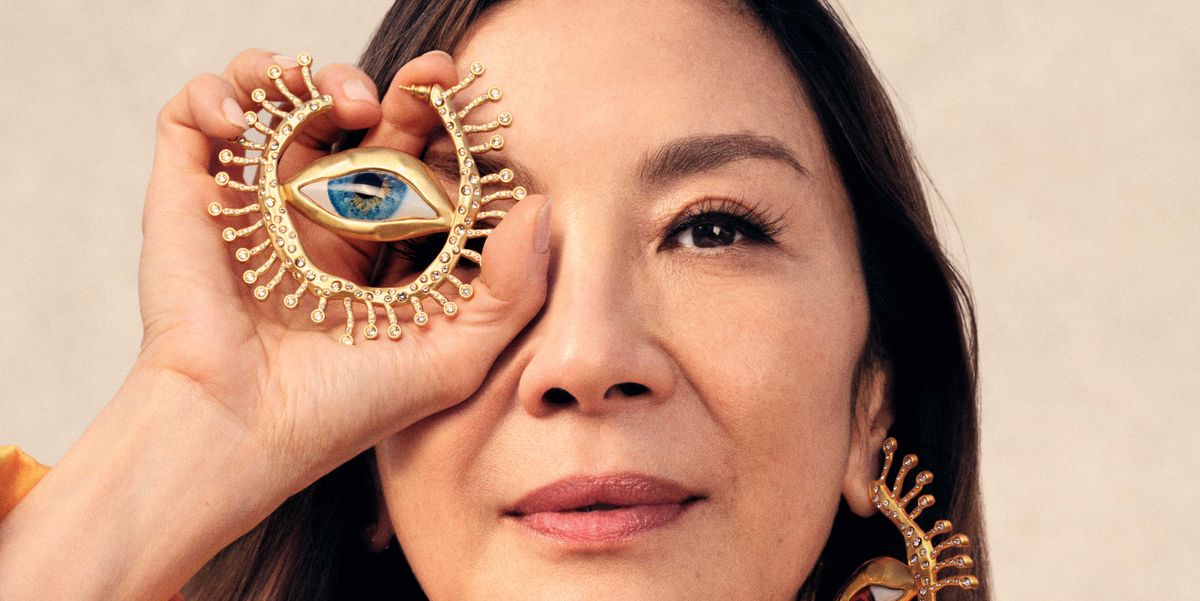 Michelle Yeoh Is Having Her Biggest Year Yet 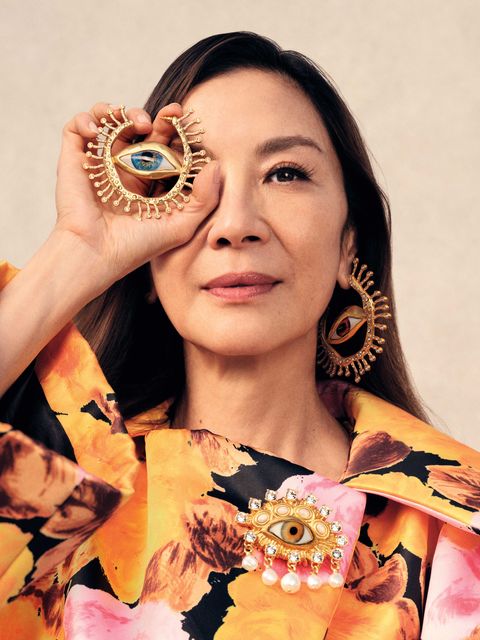 Even before the phrase “tiger mom” officially entered the lexicon, Michelle Yeoh had spent decades playing one. Many of her roles, particularly in American movies, have been variations on a theme of an opaque female figure you want desperately to impress. As Crouching Tiger, Hidden Dragon’s Yu Shu Lien, she is a reluctant and restrained mentor, battling her own desires; as Memoirs of a Geisha’s Mameha, she stress-tests her rookie in the pursuit of perfection; and as Crazy Rich Asians’ Eleanor Young, she flatly tells her son’s girlfriend, “You will never be enough.” She even sneers at James Bond—“Why, are you trying to protect me?”—in Tomorrow Never Dies.

But it wasn’t until her performance as Evelyn Wang, a Chinese immigrant mom whose life is falling apart despite her best efforts, in the critically acclaimed Everything Everywhere All at Once that Yeoh cracked open the myth and internal workings of the inscrutable tiger mom, laying bare her emotions, disappointments, hopes, and dreams, thanks to a combination of absurdity (hot-dog-finger fighting) and raw emotional scenes. For Yeoh, at 60, it’s her bravest and scariest role yet, which is saying something for the woman who regularly performs her own action stunts.

Viewers have reacted to the intensity of Everything Everywhere. When Yeoh was in Paris at the couture shows earlier this year, sitting front row at Balenciaga and Schiaparelli, a young girl of Asian descent came up to her: “I watched your movie, and….” She was crying so hard that she wasn’t able to finish her sentence. But Yeoh knew what she wanted to say. “I have younger people come up to me and say, ‘You’ve changed my life. You made me realize that there are so many things that I can do.’”

Born in Malaysia, Yeoh studied ballet until a back injury derailed her dance career. But she saw a similarity between dance and martial arts (it’s all just “choreography,” she says, “like I’ve been doing my entire life”), and became the biggest Asian female action star of her generation. Talking to ELLE on a sunny Los Angeles morning, Yeoh beams with sky-blue cat-eye glasses and ramrod posture. “I believe in taking calculated risks, because if you keep doing the same thing, then there is no excitement. Nothing original will ever come from that.” 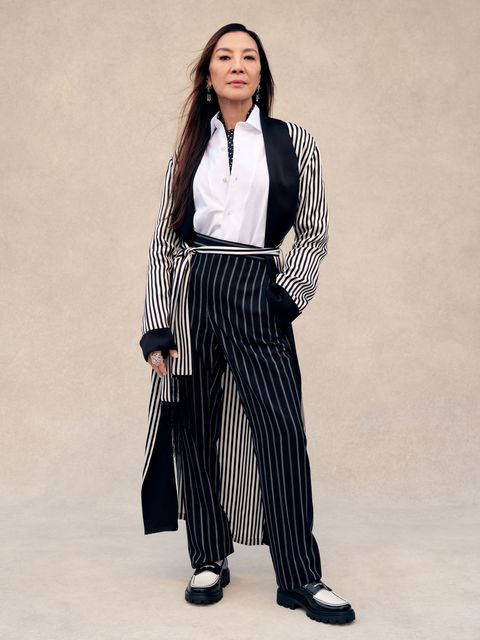 On her personal style

“If I have to go out, I wear a really great shirt and baggy trousers or jeans. On the red carpet, I see that as playtime and a time to meet the fans. They queue for hours; they stand there in the rain and are cold and wet. They don’t dream about seeing you messy, and walking away from the trailer to set with hair curlers and a big bathrobe. You have to give them the fantasy.”

“A lot of times when I’m doing press, people will say, ‘My parents will be very happy because they know I’m interviewing you.’ I come from an older generation. But it’s really with Everything Everywhere All at Once that this generation knows me now. I have six godchildren; some are in their early twenties. I can feel the difference. They talk to me on a different level now. It’s suddenly like, ‘Oh, cool. You’re cool. I can relate to you. And my friends think you are cool, too,’ which is so nice.”

I did not set out to fight against stereotypes; I only forged that path because I didn’t want to be put in a box.”

On crying during the Everything Everywhere press tour

“[Those emotions] came from a place of, When you know that there’s so much you can do and people keep saying, ‘Oh, but you’re in your fifties.’ They take away all these opportunities from you, and you’re trying to hold on. It hit me: In this one movie, I was suddenly presented the opportunity to do all these things and to show you guys what I am actually made of. It felt very emotional: ‘Wow, I actually managed to do it. And they actually like it.’” 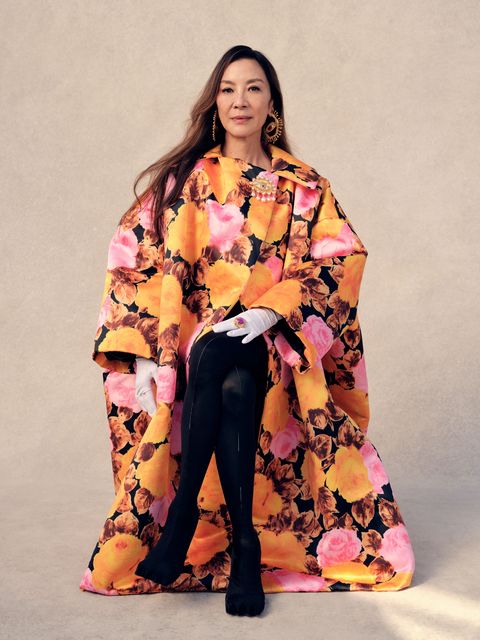 On one of her lowest points

“The physical injury [she almost broke her back on the set of 1996’s The Stunt Woman] was such a blow to me. I was in the hospital and my girlfriends came in and said, ‘What are you doing, girl?’ You’re lying there, and you think, Okay, maybe it’s time to think of something else. Do I go back to school? Do I do this or do that?”

“Then Quentin Tarantino came to see me and I still had a cast. He wanted to meet Jet Li, Jackie Chan, and myself. I was in a funk, but Quentin was larger than life. He came bounding down the stairs, picked up a pillow, and literally sat at my feet. Then he just went, ‘Oh my God, the movies that you do.’ He can literally, frame for frame, tell you exactly what you did. I was sitting there so taken by his spirit and passion. And I thought to myself, I do love this work. I’m not going to give it up. I’ll just find ways to make it safer for myself.” 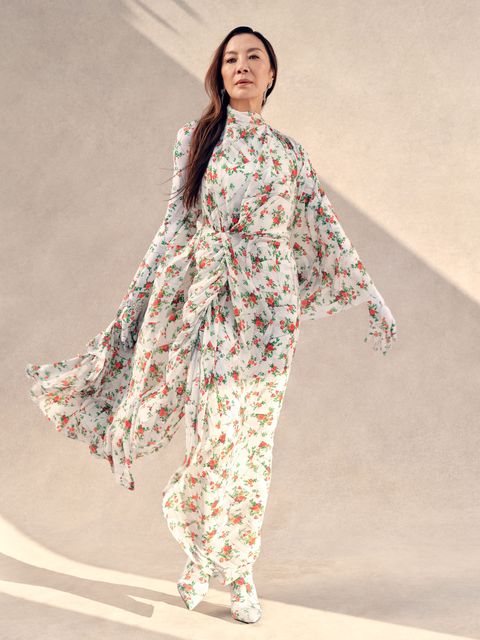 On getting work in America

“Twenty-something years ago, I found Hollywood to be very insular and blinkered because they didn’t see beyond their box office. Also, I come from Asia, from China, and in America I was told I’m a minority. It was like, What? The worst was that they seemed to not know the difference between Hong Kong and Japan, forget Malaysia. They were continuously saying to me, ‘Oh, your English is so good,’ and they thought that if they spoke more slowly that I would understand them better. So I just started turning around and saying, ‘Well, I had a long flight coming over here from Hong Kong. It’s like a 14-hour flight. So I learned [English] on the plane.’” 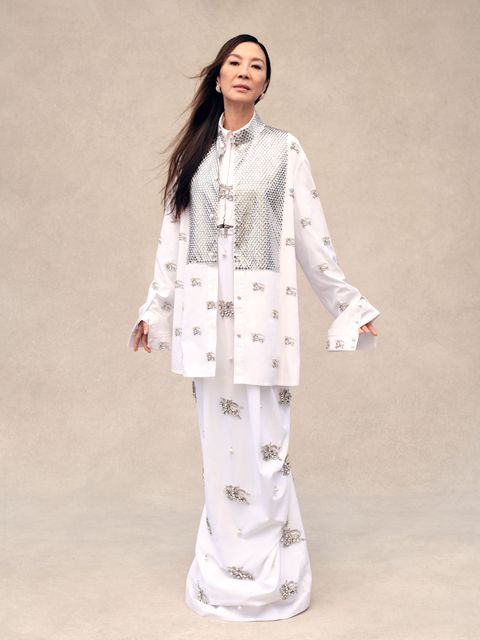 “I have never been the one to say, ‘Okay, I’ve been told that I can’t do it, so I won’t do it’—especially if I think that I can. We first have to believe in ourselves. We cannot allow people to nudge us. I know I am capable of more, and let me prove it to you. I’m like a pit bull. I’m going to defeat you. I’m just going to find a way and work until I get over it. The worst thing is that you try to push fear aside and pretend that it’s not there. I like to face it head on.

“We as women are just asking for equal opportunities. Let us show what we can do. I did not set out to fight against stereotypes; I only forged that path because I felt that I didn’t want to be put in a box.” 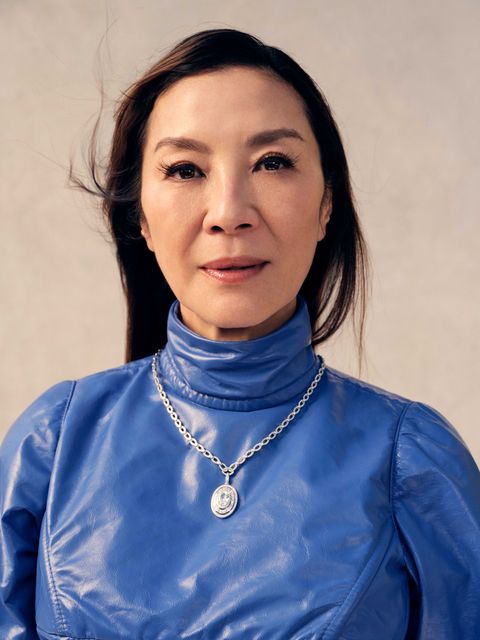 “Evelyn Wang has been working all her life, in the laundromat. She walks hunched because she carries a lot of weight on“on”? her shoulders, and she shuffles. I draw inspiration from real-life people because that’s where they come from. You go into Chinatown and you see the women wearing little red duvet jackets. I remember when my mom saw the movie, she said, “Why don’t you just look like a movie star all the time? You look so old and messy.” But this woman doesn’t go to the spa; she probably doesn’t even use sunblock. She has the age spots; she doesn’t color her hair. I’m creating a woman who you would walk by and not take a second look at, because she doesn’t have time to take care of herself and is too busy taking care of the family.” 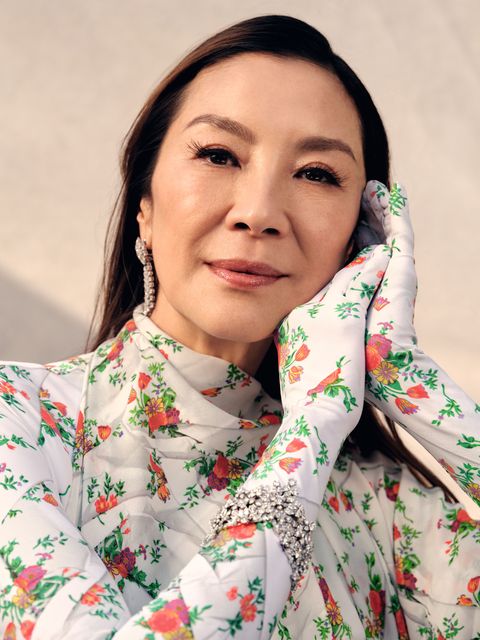 “For us as actors, we have to look at ourselves the whole time. You see the wrinkles. You start seeing all the crepey things, but you have to accept it and move forward. I might try to delay it a little bit with masks, good creams, lotions, and sunblock. But a fact of life is that when you’re born, two things are guaranteed. You will age and then you will die. You might as well accept the whole process and enjoy it. Sometimes you can get a little help, like a laser treatment or whatever, but for me, less is more.” 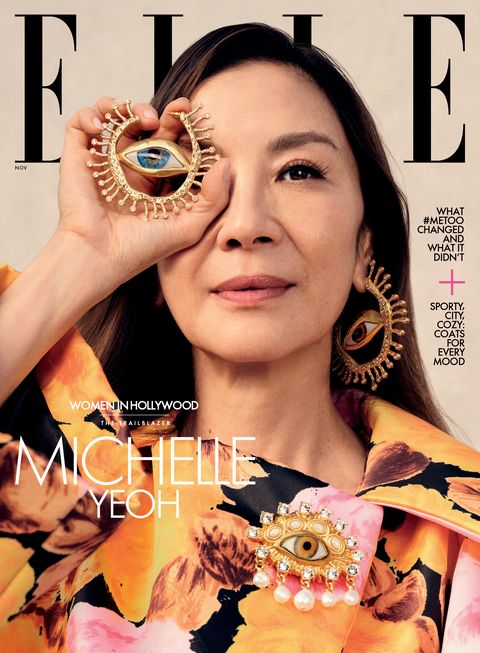 Hair by Bertrand W. Delacourt for Oribe; Makeup by Daniel Martin for Tatcha; Manicure by Temeka Jackson for the Gelbottle Inc; Set design by James Lear at 11th House Agency; Produced by Zach Crawford at Crawford and Co.

This article appears in the November 2022 issue of ELLE.

GET THE LATEST ISSUE OF ELLE

Kathleen Hou is the beauty director at Elle Magazine.