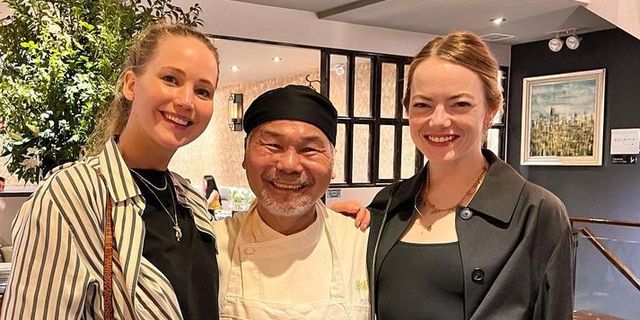 Best Actress Oscar winners and good friends Emma Stone and Jennifer Lawrence are the type of A-list stars and new moms who keep their lives largely off social media. But the internet got a very rare look into their friendship when New York City restaurant Hwa Yuan shared a photo of the two stopping there for dinner on its Instagram.

“Hwa Yuan was thrilled to host Emma Stone and Jennifer Lawrence for dinner!” the restaurant wrote. “Chef Tang and the Tang family are big fans of theirs and are honored that they are fans of our restaurant and food. Emma and Jennifer, we hope you enjoyed and come back again soon!”

Both Stone and Lawrence opted to dress in all black, the unofficial uniform of New York City. Stone wore what appears to be an open black top and dress, while Lawrence stepped out in a black crop top and jeans, with a white and gray striped button-down layered over.

Lawrence interviewed Stone for ELLE in August 2018, and the two friends spoke about their hopes of becoming parents in their 30s.

“Would you be a mother? She’s going to be the best mom; she’s so nurturing,” Lawrence said.

“That’s how you are! I think your maternal instinct is very strong and always has been,” Stone replied.

“When I was a teenager, every boyfriend I had I was like, I guess this is the one!” Lawrence said. “I was that girl. Wouldn’t it be great if we could have a baby?”

“I can tell you’re fertile just by looking at you,” Lawrence said. “I can see it in your fucking face.”

“Thank you. That’s the sweetest thing you’ve ever said to me,” Stone joked.

“I’d be honored to father your children,” Lawrence said. And that’s where the interview ended.

Alyssa Bailey is the senior news and strategy editor at ELLE.com, where she oversees coverage of celebrities and royals (particularly Meghan Markle and Kate Middleton). She previously held positions at InStyle and Cosmopolitan. When she’s not working, she loves running around Central Park, making people take #ootd pics of her, and exploring New York City.