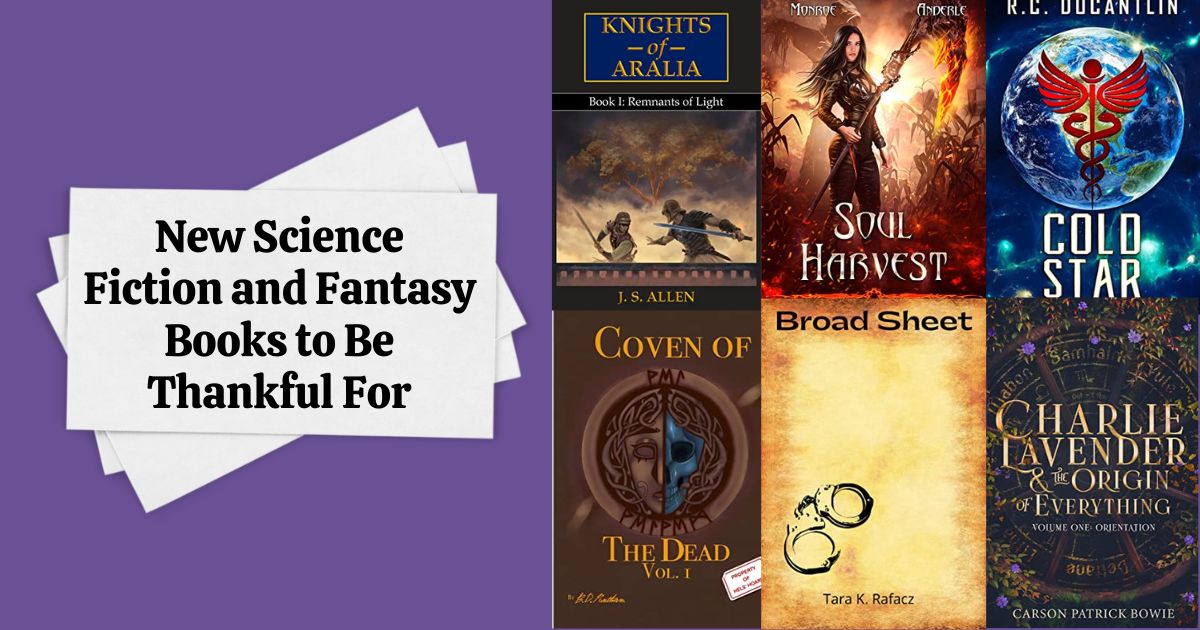 New Science Fiction and Fantasy Books to Be Thankful For New Science Fiction and Fantasy Books to Be Thankful For

We’ve got a lot to be thankful for this year – and these new science fiction and fantasy releases are at the top of our list! Check out some new books by Tara Rafacz, R C Ducantlin, Theophilus Monroe, Michael Anderle, B. D. Panthona, J. S. Allen, and Carson Bowie.

When the face of Kash Forte’s sister ends up on a bounty hunter’s broad sheet following the fall of the resistance to the empire, she receives a cryptic letter from her sister, and sets out to keep her sister safe. In an act of rebellion from her cultish culture, leaving her home world will leave Kash’s life completely transformed. “The decision to fight is easy when the alternative is extinction.” – N. T. Brooks. The plan was simple: Create a designer drug to kill billions. No one expected the side effects. How will the new humans use their abilities? Opening the portal was the first mistake. Fighting is easy when the alternative is extermination. — Cold Star is book one of the Carina Reality Series. by Theophilus Monroe and Michael Anderle

The legends didn’t do Dracula justice. Bat shifting is one thing. The ability to connect his mind to any he’d sired was an ability severely understated in the stories. His horde is like a bloodsucking Borg collective. Add to that his abilities to travel the astral plane and hypnotize his victims with a glance and his butt-load of money… I’ve never faced an enemy like this. Soul Harvest is the seventh book in The Chronicles of Zoey Grimm – a fast-paced paranormal adventure featuring a slow burn closed door romance. Note: This is not a reverse-harem. Coven of the Dead Vol. 1

Wendy has an unusual accord with death and magik. Ever since her mother’s soul was taken to the other side by a entity made of flowing flame, she has seen things differently. She recounts her journey to her new boss, Hel, Goddess of the Nordic afterlife. Coming to terms with leaving the living world and those she loves behind. Coven Of the Dead Vol. 1 is an urban Pagen fiction that tackles the concept of life after death. When his tribe’s village is destroyed and his brother taken prisoner during a raid by rebel soldiers, young Fordain Abendroth sets off on a quest that will change his life forever. He must journey to the legendary Kingdom of Aralia to seek help in rescuing his captive brother and restoring peace to his war-torn homeland. Along the way he encounters many friends, many dangers, and the truth about what it means to be a knight of the Golden Tree. Orientation (Charlie Lavender and the Origin of Everything Volume 1)

A bundle of awkwardness and social anxiety, Charlie Lavender isn’t sure about starting her freshman year in small-town Normal, Illinois. Little does she know her new best friend, a love triangle, and…a magical owl(?) are waiting for her in the Fall of 1993. She definitely didn’t expect ominous priests, probable witches, and a secret, several-thousand-year-old war would also become part of everyday life. Welcome to Normal, where nothing ever is.