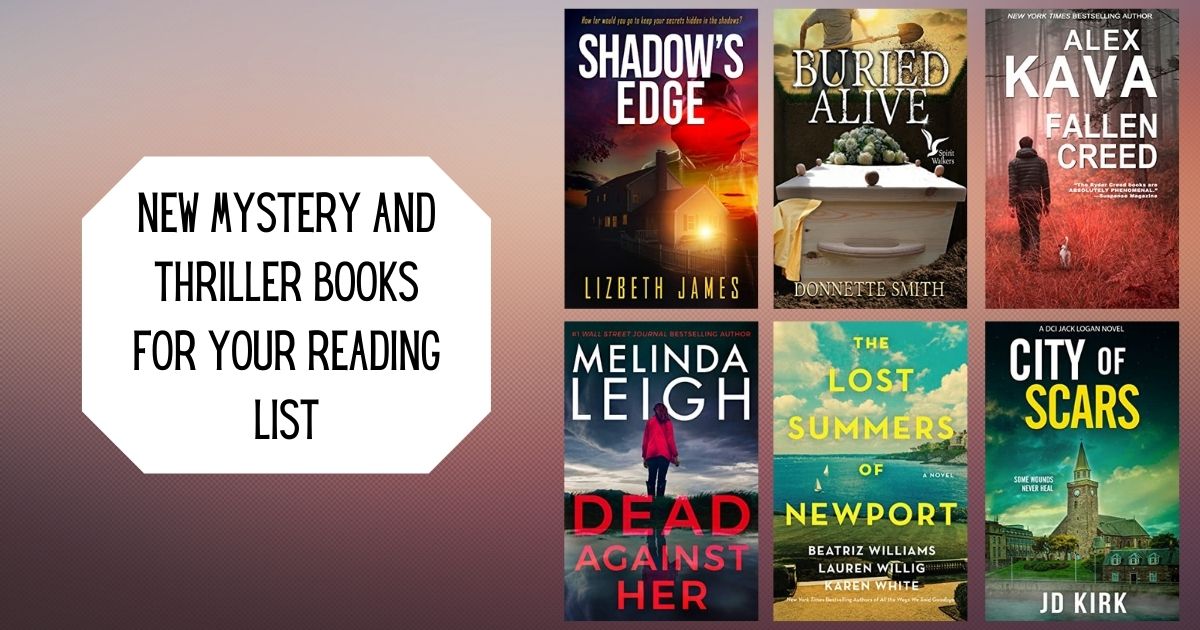 New Mystery and Thriller Books for Your Reading List

New Mystery and Thriller Books for Your Reading List

What began as an ordinary search and rescue quickly spins out of control. K9 handler Ryder Creed and his scent dog, go from tracking to being trapped. As FBI agent Maggie O’Dell and investigators search for the K9 team and the missing woman, one thing becomes certain: the woman is connected to a killer who is also searching for her. Can they find her and Ryder before the killer does? “Kava melds fact and fiction into a fast-moving, compelling and totally believable story.” —Crime Review, UK

As a clairvoyant, Jenna Langley has foreseen her fair share of murder. But the night she is haunted by visions of a woman buried alive in a makeshift casket, nothing prepares her for the chilling reality that the victim she saw in her vision is herself.
Having survived a recent tragedy, and now tasked with the duty of planning her wedding, everyone attributes Jenna’s disturbing dreams to stress. Even her fiancé does his best to convince her she is perfectly safe. But someone wants revenge and Jenna is the target of that obsession. Her only hope for survival is if her fiancé, Detective Cole Rainwater, can root out who wants her dead before time runs out.

In the spirit of Andrea Bartz’s We Were Never Here, and Julia Heaberlin’s We Are All the Same in the Dark; Shadow’s Edge is a story about the secrets we bury, the restorative power (and danger) of love, and above all, how breaking the silence may just be the secret to regaining what once was lost. “Riveting from the very first page, Shadow’s Edge is the harrowing yet hopeful story of a writer who reluctantly returns to her hometown to care for her niece, only to discover an inner strength she never knew she possessed.” -Camille Pagán, bestselling author of Everything Must Go

Called to an isolated farm to check on an elderly widow, Sheriff Bree Taggert finds a brutal double homicide. One of the victims is Eugene Oscar, the bitter and corrupt former deputy she recently forced out of the department. Working with criminal investigator Matt Flynn, Bree discovers that she isn’t the only one who had a troubling history with Eugene. But someone doesn’t want Bree digging up the past. She becomes the target of a stranger’s sick and devious campaign calculated to destroy her reputation, career, family, and new relationship with Matt. To make matters worse, she’s the prime suspect in Eugene’s murder.

The Lost Summers of Newport

by Beatriz Williams and More

From the New York Times bestselling team of Beatriz Williams, Lauren Willig, and Karen White — a novel of money and secrets set among the famous summer mansions of Newport, Rhode Island, spanning over a century from the Gilded Age to the present day. “Three stories elegantly intertwine in this clever and stylish tale of murder and family lies… This crackerjack novel offers three mysteries for the price of one.” -Publishers Weekly (starred review)

When a sadistic killer begins picking off victims on the streets of Inverness, Jack’s boss decides to bring in some outside help. But the new team member is an old flame from Jack’s past who isn’t quite ready to let him go. And, as the dead bodies rack up, the Happily Ever After that Jack has been building for himself might just be the next victim to fall… “With gripping, twisty-turny plots, unforgettable characters, and a rich vein of laugh-out-loud humour running throughout, if you haven’t yet discovered the DCI Logan series, get started now!” -Thrilling Fiction