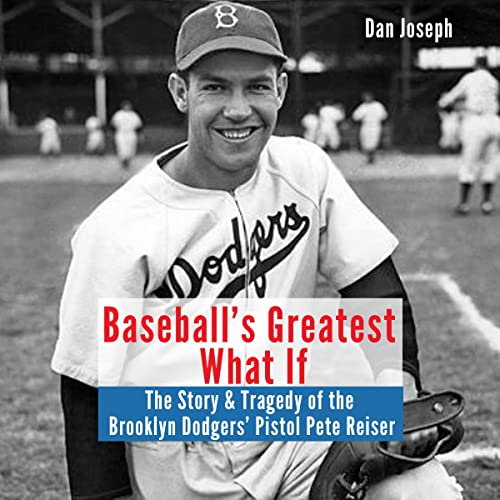 In 1942, Pete Reiser was on the road to baseball superstardom. Then he crashed into a wall—an unpadded concrete outfield wall as he tried to make a game-saving catch.

And for Pete, nothing was ever the same.

A year earlier, at age 22, he had won a batting title, a rookie of the year award, and a pennant with the Brooklyn Dodgers. Sportswriters could not stop marveling at his skill set, highlighted by a keen batting eye, a rifle throwing arm, and speed that whisked him from home to first in three-point-six seconds. Baseball men compared him to some of the game’s all-time greats, including Ty Cobb and Joe DiMaggio.

The crash shunted Pete onto a rockier path, one marked by headaches, mismanagement, hard luck, and sadly, more collisions with outfield walls. He’d enjoy scattered triumphs on this road, too, and won a place in baseball history as the man who spurred teams to install warning tracks and pad the walls.

But to this day, students of the game invoke his name when somebody asks which player is baseball’s greatest what-if.

Dan Joseph believes Reiser is that player, and lays out his case in this groundbreaking new biography. The author examines old tales about Pete, ones where he allegedly fought off dizziness to slash game-winning hits. But Joseph digs deeper into Pete’s life and career to learn what made this extraordinary player risk his health, and his skull, for the sake of victory.

Beacon Audiobooks has just released “Baseball’s Greatest What If: The Story and Tragedy of Pistol Pete Reiser” written by author Dan Joseph and narrated by Steve Zarro. Download your copy on Audible today:

The official website for Beacon Audiobooks may be found at http://www.beaconaudiobooks.com