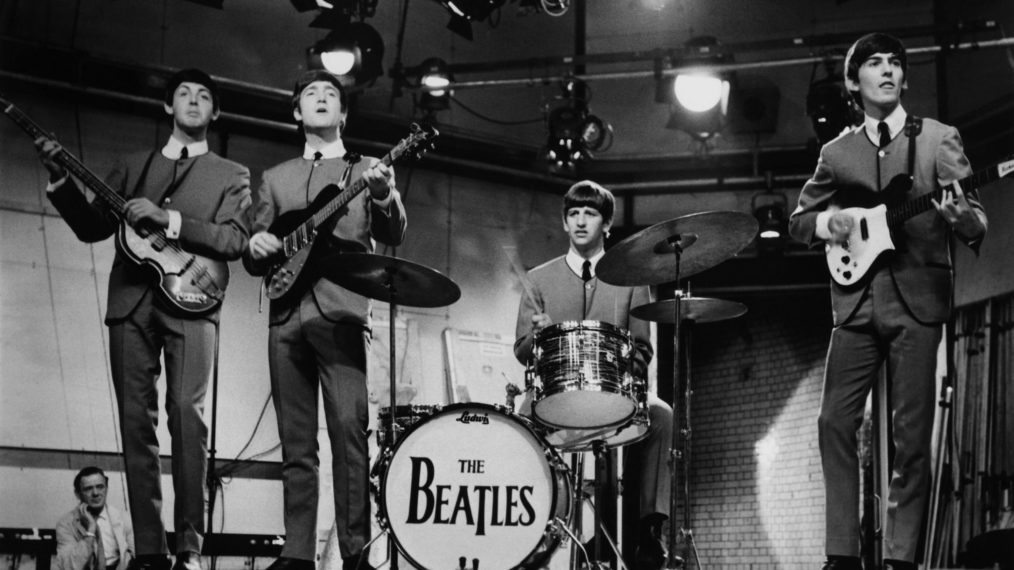 When They Were Fab: The Beatles in Their Own Words This is an excerpt from TV Guide Magazine’s The Beatles on TV Special Collector’s Edition, available for order online now at BeatlesonTV.com and for purchase on newsstands nationwide.

Rough and ready: That’s what the Beatles were when Britain’s Granada TV first captured them in 1962 at the Cavern Club for an appearance that never aired. (It was deemed too grainy.) In the years that followed, they set styles, created the template for MTV (winning the Video Vanguard Moonman at the network’s inaugural Video Music Awards) and grew with the medium. Here are their reflections on those early television days, captured in the 2000 Beatles Anthology book and various other sources.

George Harrison: It was really hot, and we were asked to dress up properly. We had shirts and ties and little black pullovers. So we looked quite smart. It was our first television appearance. It was big time, a TV-company-coming-to-film-us excitement.

Sunday Night at the London Palladium, 1963

Ringo Starr: Going on the Palladium was amazing for me because, years before, I would rehearse in the living room in our house and my mother’s best friend would always say, “See you on the Palladium, son. See your name in lights.” So I always wanted to play there. There was nothing bigger in the world than making it to the Palladium…and we were on and it was dynamite.

George: To get on the Palladium and all those places, we wore the suits and played their game, but a lot of the time we were thinking, “Ha, we’ll show these people….” We were told all the time: “You’ll never do anything, you Northern [England] bastards.” It was that kind of attitude. So although we didn’t openly say “F— you!” it was basically our thing. And we walked right through London, the Palladium, and kept on going through Ed Sullivan and on to Hong Kong and the world. We had that confidence. That was the good thing about being four together.

Paul McCartney: Seventy-three million people were reported to have watched the first show. It is still supposed to be one of the largest viewing audiences ever in the States. It was very important. We came out of nowhere with funny hair, looking like marionettes or something. I think that was really one of the big things that broke us—the hairdo more than the music, originally.

George: I’ve heard that while the show was on there were no reported crimes, or very few. When the Beatles were on Ed Sullivan, even the criminals had a rest for 10 minutes.

George: The thing that bothered me about American TV was that in the morning, there’d be a football match on that obviously didn’t take place in the morning; it’s not the appropriate time of day. There are some things that I refuse to watch at certain times of day. I could never stand seeing I Love Lucy and all those nighttime programs in the mornings. Or worse still, a movie at 7 or 8 in the morning. For me, movies don’t come on until evening.

Ringo: We had our Thank Your Lucky Stars gig to do—the TV show—and we…saw these suits in a [shop] window and just went and got them. We all got one, and suddenly that was a uniform. We were going to all these shops and buying little uniforms for ourselves. That’s also why we looked like Beatles; besides the haircut, we were all looking the same.

The August 15 concert was the centerpiece to a 1966 documentary, The Beatles at Shea Stadium. Over 55,000 people attended the largest Beatles show up to that point. It aired on TV in the U.K. and played in theaters in the U.S. before being broadcast on ABC.

Ringo: The idea of making promotional films was that we didn’t have to go out [to play on television]. I don’t think we even thought of calling them videos. They were just going to be on TV.

George: They were the forerunner of videos. We thought, “We can’t go everywhere. We’re stopping touring and we’ll send these films out to promote the record.”… Once we actually went on The Ed Sullivan Show with just a clip. I think Ed Sullivan came on and said, “The Beatles were here, as you know, and they were wonderful boys, but they can’t be here now, so they’ve sent us this clip.” These days, obviously, everyone does that—it’s part of the promotion for a single—so I suppose in a way we invented MTV.

Ringo: It was great, going out to hundreds of millions of people. It was the first worldwide satellite broadcast ever. It’s a standard thing that people do now, but then, when we did it, it was a first. That was exciting; we were doing a lot of firsts.

George Martin, Beatles producer: John wrote “All You Need Is Love” especially for the television show. [Beatles manager Brian Epstein] suddenly whirled in and said that we were to represent Britain in a round-the-world hookup, and we’d got to write a song. We had less than two weeks to get it together, and then we learned there were going to be over 300 million people watching, which was for those days a phenomenal figure. John came up with the idea of the song, which was ideal, lovely. George: Because of the mood of the time, it seemed to be a great idea to perform that song while [other participating countries were] showing knitting in Canada or Irish clog dances in Venezuela. We thought, “Well, we’ll sing ‘All You Need Is Love’ because it’s a subtle bit of PR for God.”

John: At the beginning of 1967, we realized we wouldn’t be doing any more tours, because we couldn’t reproduce onstage the type of music that we’d started to record. If shows were to be out, we wanted something to replace them. Television was the obvious answer.

Paul: There wasn’t a script for Magical Mystery Tour. We said to everyone: “Be on the [bus] on Monday morning.” I told them all, “We’re going to make it up as we go along, but don’t worry—it’ll be all right.” George: The press hated it. With all the success we had, every time something came out, they’d all try to slam it, because once they’ve built you up that high, all they can do is knock you back down again. That’s what happens; that’s life.

Neil Aspinall, Beatles personal assistant: [John and Paul] appeared on The Tonight Show, but Johnny was on [vacation], so it was hosted by [sports announcer] Joe Garagiola. I think one of the things John said around that time was: “We’ll just spin it like a top and see where it goes.”

John: It was terrible. [Garagiola] was asking, “And which one’s Ringo?” and all that s–t. You’d expect to go on the Johnny Carson show…and then you’d get there, and there’s this sort of [baseball] player who doesn’t know anything about you, and Tallulah Bankhead saying how beautiful we were. It was the most embarrassing thing I’ve ever been on.

As the Vietnam War raged on, John and Yoko held two weeklong Bed-Ins for Peace at hotels in Amsterdam and Montreal. These nonviolent protests, a play on the “sit-in” concept, were filmed and became the foundation of the documentary Bed Peace.

John: We sent out a card: “Come to John and Yoko’s honeymoon: a bed-in, Amsterdam hotel.” You should have seen the reporters and cameramen fighting their way through the door! Their minds were full of what they thought was going to happen.

Ringo: I thought the bed-in was great. There was a great scene on The David Frost Show when they got in the bag on TV: “Just talk to us, not to our image.”

John: We went to Austria and did a press conference [while sitting inside] a bag. And it was great, because all the press came in and they never saw us—we were both in a bag, and they interviewed the bag…. If everyone went in a bag for a job, there’d be no prejudice. You’d have to judge people on their quality within. We call it total communication. It was a great press conference, and they all had a very serious conversation with a bag.

This famed mockumentary from Monty Python alum Eric Idle tells the tale of fictitious English rockers the Rutles. TV Guide Magazine said at the time the group’s resemblance to the Beatles was “purely—and satirically—intentional.” Harrison had a cameo in the film.

Neil Innes, cowriter-costar: The thing I heard was John was fascinated and kept watching it. Ringo liked the happy [parts] and not the sad [parts]: The [Beatles] story was too sad to tell…. I think Ringo was too much reminded of the real breakup. And Paul had an album out at the same time as the Rutles came out and was forever saying, “No comment.”

George: The Rutles sort of liberated me from the Beatles in a way. It was done with…love.

The Beatles: Get Back, Documentary Premiere, November 25–27, Disney+