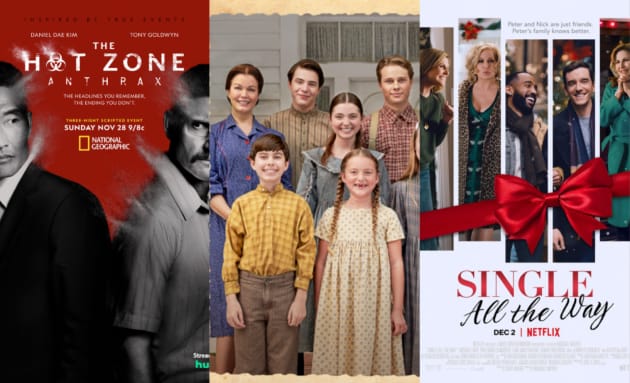 What to Watch: The Waltons: Homecoming, The Hot Zone Anthrax,

It’s that time of year again,

Regularly scheduled TV is dying down, and they are being replaced with movies and special events.

Don’t worry. There is still a lot to look forward to, TV Fanatics.

8/7c The Waltons: Homecoming (The CW)

The Waltons: Homecoming is a heartwarming family comedy told through the eyes of John Boy (Logan Shroyer).

John is expected to help raise his sisters while his father is away.

Harrison is involved in an incident at school that arouses Dexter’s suspicions.

A new, unlikely alliance is formed when Molly changes her trajectory.

Kurt continues to cover for Matt, but what else is he hiding?

The new series focuses on the anthrax letters targeting journalists and politicians.

Dae Kim plays Matthew Ryker, who is hot on the case of finding the killer.

Keisha and Jharrel must prove their loyalty to the 4400, even though they know their secret.

Hayden plans a “jailbreak” to rescue Mildred, but will his visions help or hinder them?

Is Mariah destined to come between Hayden and Mildred?

Find out on another exciting episode of 4400!

Squish! Splat! One more ghoul has been exterminated from the competition. Just like a little cockroach in that infested chamber.

Only five contestants are left to slay another day. Will it be Dahli, HoSo Terra Toma, La Zavaleta, Saint or Sigourney Beaver who gets chopped next?

Grab your popcorn, monsters. Another cutthroat week is coming to feast on one unlucky soul.

La Brea’s first season comes to an end with this exciting, jaw-dropping finale.

Eve tries to get Isaiah to the Rotunda sinkhole before it’s too late and Josh and Izzy cease to exist.

Meanwhile, back in LA, Gavin and his team must get past Agent Markham to launch a final rescue mission in Seattle.

How far will the residents of “Rivervale” go to have their wishes come true? Would they even sell their souls to make it happen?

The Devil has arrived in town with many enticing offers for our familiar favorites. Someone might have a heavy piece to pay when it’s time to collect.

Meanwhile, a nightmare from Betty’s past has arrived to tempt her with an intriguing offer. Will she discover who’s behind the mask?

Liana is furious with Deshawn and Danny for ousting her closest ally, Shan.

Jeff announces a dangerous, new twist — that Xander is, naturally, very excited about!

It’s another episode of the messy, beautiful reality show that’s still kicking after forty seasons! You won’t want to miss it!

The CSI team looks closely at the eccentric world of sideshows when a couple of performers are discovered burned in a pit.

Hodges mulls a plea deal as his criminal trial kicks off.

Max, Grissom, and Sara search for evidence to exonerate him.

Single All The Way (Netflix)

Peter’s mom Carol wants to set him up with her hunky trainer James, and the rest of the family thanks he’s in love with BFF Nick.

With an over-involved family, a hilarious Christmas pageant, three hunky men, and fun Christmas carols, add this one to your list!

This just in: The Gossip Girl reboot has found its footing!

We’ve already watched the final three episodes of the season, and they are filled with surprises, wild developments, and everything you’d expect from a show set in this universe.

This is the Gossip Girl we know and love.

The Federation’s investigation of the anomaly is sidetracked when a seemingly rogue Qowat Milat nun, a former Ni’Var citizen, starts stealing dilithium deliveries from Starfleet vessels.

With Ni’Var close to joining, politics takes center stage as Michael’s mother, Gabby Burnham steps in as the representative for Qowat Milat.

What is the lost cause at stake here? Will the Ni’Var Science Institute be able to answer any questions about the anomaly? How will Michael handle her mother’s Absolute Candor?

In the interest of absolute candor, we must tell you that next week’s #StarTrekDiscovery finds the crew on the business end of a Qowat Milat blade. pic.twitter.com/hgiPhAjgHY

Walker is getting a Christmas episode, but noting everything will be merry as the feuding Walker brothers must work a case together,

August learns some clues about the Walker and Davidson feud so maybe there will be a ceasefire.

Trey gets some advice about love and dealing with his and Micki’s relationship.

Do you smell that? One queen’s chances of being Canada’s Next Drag Superstar went up in flames when they failed the Roast Maxi Challenge.

Stick a fork in that burnt Thanksgiving turkey. It’s done and over with.

Five queens remain to show their Canadian stuff. Who will be the next to go between Adriana, Gia Metric, Icesis Couture, Kendall Gender, and Pythia?

The Wheel of Time (Amazon Prime)

Halfway through the season, the stakes are high in The Wheel of Time.

The villagers face different issues: Mat and Rand try to escape the Fade that killed the Grinwell family, while Egwene and Perrin deal with a new challenge.

Moiraine, Lan, and the other members of the Aes Sedai camp mourn their losses, while Nynaeve comes to terms with her newfound ability.

Magnum starts following Higgins to discover what she’s been hiding.

At the same time, Juliet is secretly assigned to infiltrate a group threatening to take down MI-6.

Rick struggles after an explosion takes the life of someone important to him.

Chris Rock’s Mom Calls Out Will Smith’s Oscars Ban: ‘You

How a soil microbe could rev up artificial photosynthesis