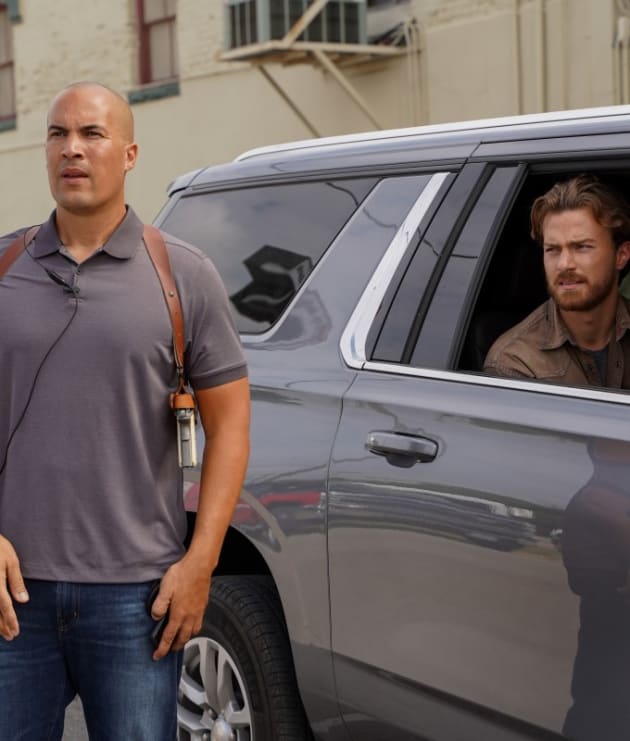 Walker Season 2 Episode 2 Review: The One Who Got

How are we feeling, Walker family, after the news about Lindsey Morgan leaving Walker?

It’s times like Walker Season 2 Episode 2 where I can’t imagine the show without her.

Lindsey Morgan shined in this Micki-centric, showing that she’s a fighting badass and an emotional actress.

Cordell: Micki, who’s that?
Micki: It’s the one who got away

The episode picked up right where Walker Season 2 Episode 1 ended, with a tense encounter between Micki, Serrano, and her new informant, who she dubbed as the one who got away.

Garrison and Micki sparkled with chemistry. He recognized her right away and tested her military skills in front of Serrano, continuing the ruse of her being “Yvette.” He seemed genuinely happy to see Micki again.

Garrison: Micki Ramirez, it’s been a long time.
Micki: Garrison, why am I not surprised you’re wrapped up in all this?

While she wanted to get straight to business, he wanted to visit their old haunts and discuss their past. He even took her to the church where they were scheduled to get married to prove he was telling the truth inside a church.

Pretending to be engaged to obtain intel is an old trick, but these two had chemistry in spades.

Garrison swore he had enough evidence to put away Serrano and that he hated that the boss killed Spider too.

Now, Garrison had to win over her bosses, and that was not an easy task. Captain James and Cordell were protective of Micki and wanted her out, but Micki wanted to complete what she started.

It was amusing to watch Cordell and Micki argue like children over who kept the most secrets until Captain James reminded them they had more important matters at hand.

When Garrison persisted on his immunity deal, Denice cleared it with the stipulation that she was coming down there to check on things.

One of Serrano’s goons set that room on fire when Cordell and Micki went in to gather the evidence files. They barely made it out.

Not only did it destroy the fire, but it brought back terrifying memories for Cordell and Denice because of the fire from their childhood. They both agreed they did to discuss what happened that night.

Hopefully, we will see flashbacks of it and learn along with them.

In between all this stuff, Trey was stuck at home, miserable because no one was answering his texts, and he had to deal with four kids in detention. Todd was right. It did look like a scene out of The Breakfast Club, and Trey used that to his advantage.

Building a team exercise to get Todd and August to communicate and Stella and Colton to talk was a brilliant idea. August and Todd could smooth things over about Ruby while Stella and Colton talked about their dysfunctional families.

Colton finally apologizes to her about her mom, and she sympathizes with his parent’s divorce.

Stella and Colton look like they have finally formed a truce, especially when they come across a missing and injured horse that they decide to help together. The ice is thawing. The matriarchs are the last hold-out in this feud, along with Dan and Liam.

Garrison seemed to love Micki. He had a romantic mix CD ready to play for her.

He even said the right things, such as how he wanted to help her takedown Serrano, and he still cared about her.

We wondered what his intentions were when he hinted if Micki had anyone back home, and she blushed before telling him to be careful. Sometimes a woman changes a con. Did Garrison have pure intentions when he volunteered to meet Serrano or was it a setup?

That ending trap and fight scene was hard to watch but very emotional and powerful.

Betrayal is always brutal to watch. Lindsey Morgan delivered some of her best emotional scenes as Micki when she demanded answers on why Garrison lied to her.

Garrison also looked so emotional when he said he couldn’t kill the others, but he had to kill Cordell; otherwise, Serrano would kill Micki. In his twisted way, Garrison loved Micki and wanted to protect her.

That gunfight brought some of the old-fashioned action scenes that have been lacking on Walker lately. Micki held her own just like the rest of the Texas Rangers. When she pushed Garrison, he was suddenly dangling over the ledge.

It’s not your fault.

Micki looked so frightened. She desperately tried to save him, but he fell to his death.

After that, Micki looked so deep in her grief. She lost her first love. She found a painting Garrison had done of the church they were almost married in, and she stashed it in her truck.

Micki played the mix CD and drank her grief away. How will she recover from the fact that her first love died before her, and she feels responsible?

Over to you, Walker Fanatics.

With Garrison dead and Serrano in jail, is Walker’s life still in jeopardy?

What’s next for Micki?

Can she and Trey move on after her time undercover?

Do you think Stella and Colton’s truce is for real?

Chime in below in the comments.

Remember, if you miss an episode, you can watch Walker online right here via TV Fanatic.

Walker airs Thursdays at 8/7c on the CW.