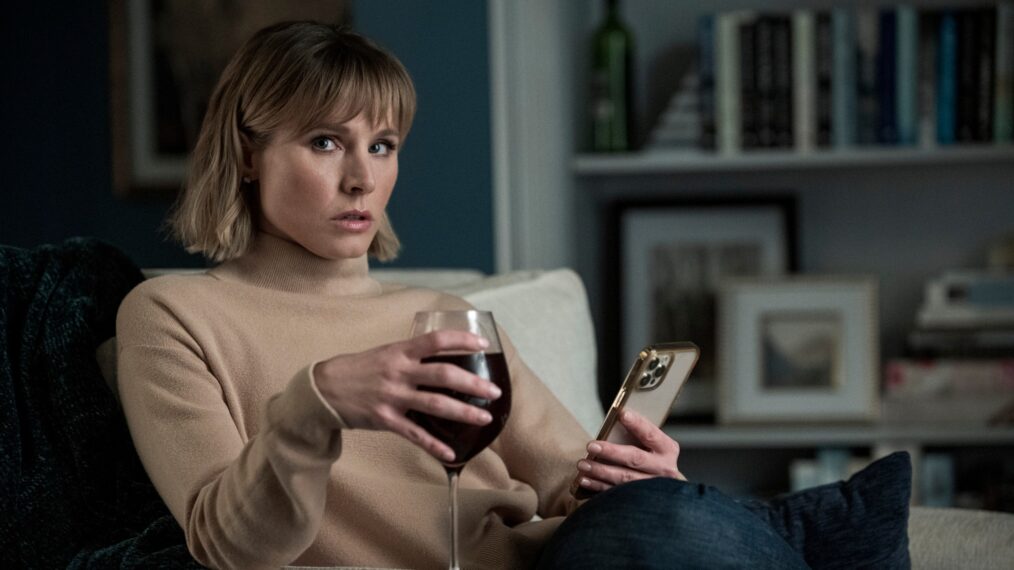 ‘The Woman in the House’ Kristen Bell & Show’s Creators [Warning: The below contains MAJOR spoilers for Season 1 of The Woman in the House Across the Street From the Girl in the Window.]

It’s safe to say that The Woman in the House Across the Street From the Girl in the Window isn’t a conventional psychological thriller. The series starring Kristen Bell is so absurd, you may not be able to accept it as fact, but rest assured, this extreme satire is set in reality, however, altered it may seem.

“It’s reality, yeah,” says co-creator Rachel Ramras. “We don’t know if what [Anna]’s seeing is correct or not, but it is reality,” fellow co-creator, Larry Dorf adds. Regardless of perception, it’s clear that Anna’s (Bell) story is being told through a comedic lens. Mourning after the loss of her daughter who tragically died on a “bring your daughter to work” outing with ex-husband Douglas (Michael Ealy), Anna’s reawakening is sparked by the arrival of her new neighbors Neil (Tom Riley) and his daughter Emma (Samsara Yett). Anna’s wine-soaked and pill-laden fog doesn’t help when she believes she witnesses the murder of Neil’s girlfriend. Ultimately, the culprit in the mysterious death is little Emma who turns out to be a very unique version of a bad seed child.

When Anna and viewers are finally clued in, the reveal results in a fight for her life against a young kid half her size. “It was the most absurd choice,” Ramras acknowledges. “There’s nothing more absurd than a little girl being a mastermind murderer, and when we were imagining what this fight would look like, it was making us laugh.” “Kristen and Samsara were both such amazing sports and they played it really, really real,” Ramras continues, “And we think that’s what made the funniest.” Viewers definitely need to abandon any preconceived notions about this being a serious and legitimately dramatic crime thriller, as running gags like a mailbox that’s been under repair for years, are played realistically but are utilized as ingredients for this clever recipe.

But it wasn’t getting to fight a child that really pulled Bell into the series as Dorf notes the details surrounding the death of Anna’s daughter was really what won her over, “She said, she’s never seen that joke being pulled off before.” “The only way it was going to make us laugh was to push some of those elements to an extreme that’s so terrible that they become funny,” fellow co-creator Hugh Davidson says. “The way that her [daughter is killed] is absurd and ridiculous. And surely no FBI forensic psychologist versus serial killers would take their daughter to work.”

When it came to including tropes often found in popular crime novels and films, Ramras says, “It was certainly the more the merrier and so we tried to include every one we could think of from that genre.”

Once Anna does make it through the battle with Emma, her life turns around when she reunites with Douglas for a second chance at love and life. Just as things seem to be in order for Anna, a new mystery arises when she boards a flight to New York. Planning to visit her pal Sloane (Mary Holland), Anna becomes intrigued by the person sitting next to her, a fabulous mystery woman played by Glenn Close.

Ultimately, Anna awakens halfway through the flight to use the restroom and opens the door to find a bloodied corpse, but the flight attendant gaslights her. Could another chapter be on the horizon and how did the show land such a monumental cameo? The fact isn’t lost on the creative team or Bell. “I hope that we do 100 seasons where murders just follow Anna around,” Bell gushes. “This tone is so much fun to figure out what it was and how to nail it. I think we did a pretty good job. And having the blessing of the queen of psychological thrillers in the final episode was such an honor,” she adds of Close’s cameo.

Only time will tell for certain whether Anna’s story will continue at Netflix, but Dorf teases “We did spend time crafting what happened when that plane lands. So pages exist.”

The Woman in the House Across the Street From the Girl in the Window, Streaming now, Netflix