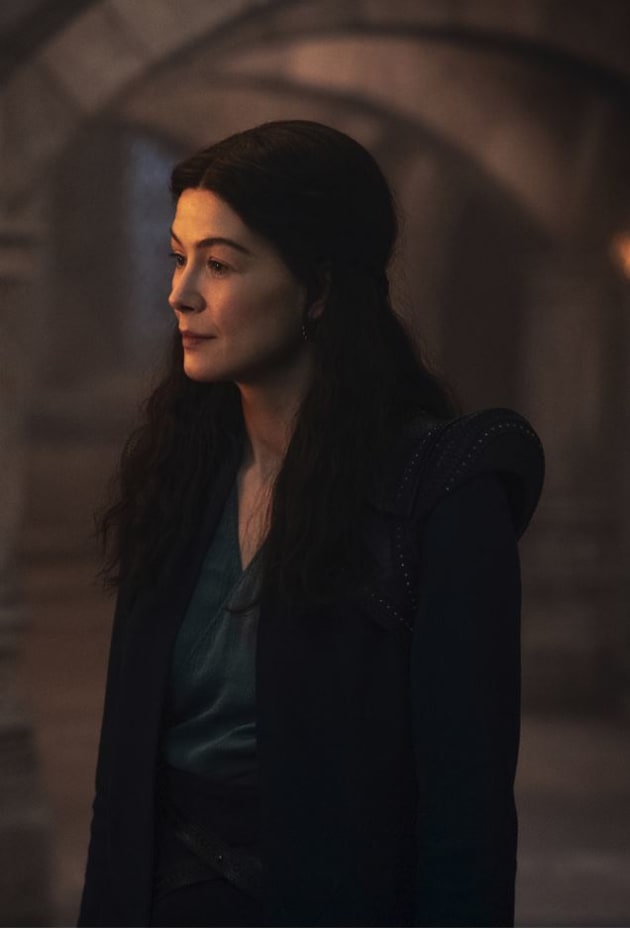 The Wheel of Time Season 1 Episode 5 showed the funeral (along with the emotions involved) after the tense battle with Logain’s followers.

The hour also presented some hardships for a few of our villagers.

Rand and Mat made it.

They made it to the White Tower’s city, but not without encountering some strange people.

Mat’s condition has deteriorated far, and we wonder how much longer he’s able to keep whatever may be influencing him inside.

We’re hoping it’s not the madness, but with the way he’s been acting, we don’t know what else it could be.

Mat possesses some connection to the One Power, whether through the knife he obtained in The Wheel of Time Season 1 Episode 2 or other means.

Speaking of the One Power, the other villagers seem to show some affinity.

Perrin and Egwene found themselves in a bit of a pickle: they were captured by the White Cloaks and were given an ultimatum: Egwene channels, and Perrin lives, or she doesn’t channel, and Perrin dies.

In the end, Egwene managed to channel, but very weakly.

However, in a shocking turn, Perrin also managed to channel.

As Valda (one of the heads of the White Cloak) approached Egwene to kill her, Perrin escaped his restraints and channeled the One Power.

His eyes turned to a golden color as his rage intensified.

This provides more questions about who the Dragon Reborn is, seeing as now four of the five villagers (including Nynaeve) have shown affinity to the One Power.

Rand now serves as the odd man out.

He has yet to show any ability to channel, leaving us to question his history and bloodline more.

Nynaeve’s path continued to get more difficult for her.

She’s started to face recruitment offers from the different factions of the Aes Sedai, with the Liandrin showing the most interest.

Liandrin (Kate Fleetwood, Harlots) always displays a sort of deception, and there’s no doubt that she plans on doing something sneaky when it comes to Nynaeve.

The start of the episode showed how the Aes Sedai buried their dead: including Nagashi.

Stepin’s (Peter Franzen) Aes Sedai he had bonded with and died defending her sisters, and the pain he expressed permeated throughout the whole episode.

As explained, a Warder losing their Aes Sedai causes intense pain and suffering.

The emotions that Stepin felt get portrayed beautifully on screen, with all of his fellow Warders and Aes Sedai surrounding him with love and comfort.

The end of the hour resulted in Stepin succumbing to his grief, pain, and depression.

Lan found Stepin, who had already bled out.

The following funeral for Stepin was one of the most challenging things to watch.

The Warders were all dressed in white, with the Aes Sedai present.

A moment that showed the strength of the bond between Lan and Moiraine was exhibited here: they made eye contact as Lan started to scream his emotions.

Seeing the emotion being let out through Lan while also affecting Moiraine brought tears to our eyes.

This funeral scene remains in our minds and has quickly become one of the best scenes in the entirety of the series (so far).

This episode contained many beautiful scenes outside of the funeral.

When the White Cloaks found Egwene and Perrin, Ila and her people stood defending the two, accepting Perrin and Egwene as their people.

Valda [gesturing to Perrin and Egwene]: Those two, bring them to me.
Ila: You can’t just take our people.
Valda: They’re not your people.
Raen: They’ve eaten our food, and shared our fire.
Valda: Do you want your new friends to suffer?
Ila: If they don’t wish to go with you, you can’t have them.

This sadly did not fair well for Ila’s people, as they got severely beaten by the White Cloaks (and the two villagers ended up getting captured).

We hope that Ila and her group survived, as their fate is unknown.

The third scene that struck a chord ended up being a reunion.

The strange man that Rand met in the city managed to retrieve Nynaeve from the White Tower.

The reunion between Rand, Mat, and Nynaeve stirred up a lot of emotions, and Nynaeve immediately became concerned for Mat’s condition.

The only thing that concerns me: we know nothing about this strange man that Rand got to know.

Rand: We thought you were dead!
Nynaeve: Where’s Egwene? And Perrin?
Rand: On their way, I think.
Nynaeve [to Mat]: Oh no. What happened to him?
Mat: Nynaeve?
Nynaeve: Who else could I be?
Mat: You’re alive!
Nynaeve: So are you, barely

I don’t know if we are supposed to trust him, and a seed of doubt got planted which makes us to question: is that really Nynaeve? Or the work of some sort of dark magic? Whether or not the reunion ends up being real, it still proved to be a beautiful scene.

Unknown fates seem to be a popular theme in The Wheel of Time.

During the final scenes of The Wheel of Time Season 1 Episode 4, Thom faces off against a Fade.

His fate remained undisclosed in Blood Calls Blood, with Mat and Rand assuming that he’s dead.

However, there’s a chance that Thom survived his match with the Fade without proof of this.

Death is not a guarantee in the World of the Wheel, as proven at the end of The Wheel of Time Season 1 Episode 2 with Nynaeve surviving the Trolloc attack.

The best way to approach The Wheel of Time is that if it didn’t happen before you, it might not have happened.

I hope that the fates of multiple characters get shown one way or another because leaving those loose ends will severely hurt the quality in the future.

Perrin’s wolves made an exciting return, but instead of following (and seeming to threaten) Perrin, they attacked the White Cloaks, helping Egwene and his escape.

This event added another layer to the mystery of the wolves, as we still do not know what they mean or what their true purpose is.

We have not seen an appearance of the Dark One in a while, leaving us to wonder what lies ahead for our characters.

The Fade that Thom faced off against ended up being the closest thing we got to see the Dark One’s forces.

The strong emotions and beautiful moments in this outing made for this to be the best episode of the season so far.

With only three episodes left in the season, we are getting more anxious to find out who the Dragon Reborn is (and we are anxious to see if it follows the books).

So Fanatics, what did you think of Blood Calls Blood?

Are you as devasted as we were over the tragedies?

Let us know what you thought (and felt) in the comments below.