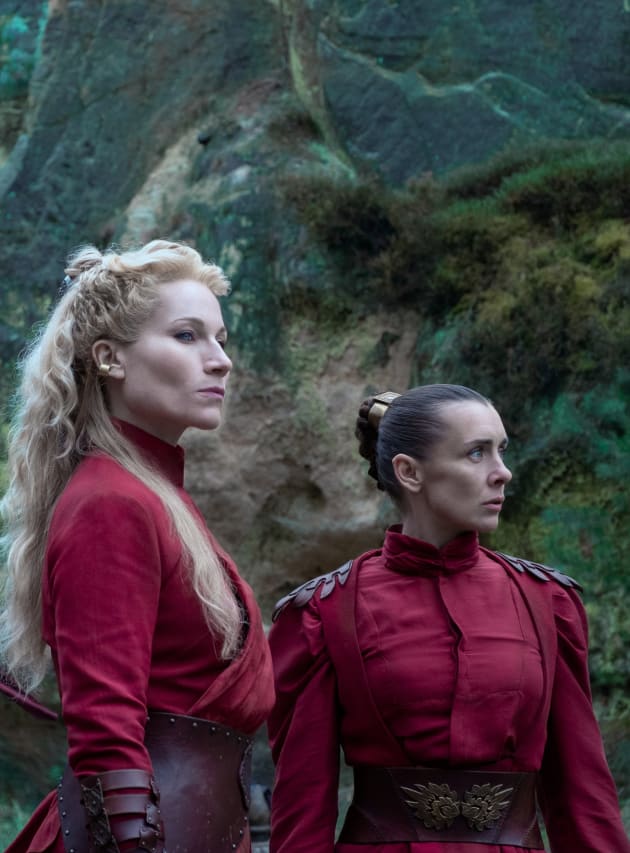 The Wheel of Time Season 1 Episode 4 Review: The

The Wheel continues to spin, and it keeps releasing something better each time.

On the Wheel of Time Season 1 Episode 4, Moiraine finally got healed by another Aes Sedai.

However, she didn’t get to rest for long.

Before getting into the episode, I need to re-state the brilliancy of the title sequence.

The imagery and effects tell their own story, almost like a history book.

The music used during the sequence also shines, as does the music throughout the entirety of the series.

The hour improved and continued the different story threads introduced in The Wheel of Time Season 1 Episode 1.

The villagers are still separated but seem to have found different traveling companions for the time being.

Egwene and Perrin decided to travel with Ila (Maria Doyle Kennedy) and her people for a time, while Mat and Rand were with the man from the inn, Thom (Alexandre Willaume).

These characters helped the villagers one way or another, but their true motives are still unknown.

Their addition to the series has been quite exciting and welcome, and we are excited to see what more the characters will do.

Also, we love seeing Maria Doyle Kennedy on our screens since we fell in love with her in Orphan Black.

In last week’s review, the information we asked about got touched on in this episode: details of the bond between an Aes Sedai and a Warder.

We got to see many different Aes Sedai and their Warders and how close their bonds are.

They respect their bond, even if it tires either of them out, and genuinely love whomever they get bonded with.

When an Aes Sedai dies, the man bonded to them feels great pain.

Of course, the man the Aes Sedai captured (named Logain) is not the dragon reborn. As Lan pointed out, his age surpasses the correct age by over ten years.

Logain, however, did possess plenty of magic and an army of followers who believed in him.

His magic was strong but influenced by outside forces uncontrollable by him, driving him slowly into the madness.

The hour wasn’t without its sad moments.

The thing chasing Rand, Mat, and Thom catches up to them, killing an innocent farm family in the process.

Mat and Rand ran off, leaving Thom inside of a barn fighting the fade on his own.

Egwene and Perrin learned about the repercussions of violence and what it does to people, whether violence is ever justified or not.

Having Ila talk to Perrin about this sort of trauma hurt him (because he accidentally killed his wife), but I believe it will help him later.

Moiraine, however, suffered the most in this episode: she lost one of her sisters.

Logain channeled all of his magic trying to escape and overpowered three Aes Sedai, killing one of them instantly.

Moiraine and Liandrin pushed themselves to the limit to hold him until many other Aes Sedai appeared, but the damage already was done.

Sadly, Stepin, the man bonded to the deceased Aes Sedai, wanted to kill him but ended up hurting every other Aes Sedai in the process.

This event led to the best cliffhanger/surprise ending the show’s used so far.

Nynaeve’s character has been somewhat of a mystery, and the ending of The Dragon Reborn only made her more mysterious.

As she knelt over Lan (who started to bleed out due to a cut on his neck), she started getting extremely emotional.

Her emotions built up, and so did her magic.

With one final yell, a bright light erupted out of her, and everyone (except the deceased) in the room gets healed immediately.

This incredible feat brings a new part of Nyaeve’s character to the table: her magical ability.

Due to her “wind hearing” abilities, we knew she already possessed some of the One Power.

She’s never used it like this, however, and she stunned herself.

Her character continues to be one of the most compelling characters in the entire series and giving her such a robust magical ability adds to her complexness.

Zoë Robins impresses Nynaeve, and I’m so excited to see how she handles everything thrown at her.

One thing that has improved with each premiere episode and improved here: the production/effects.

The production design is fantastic, but I felt something off in the early outings with the special effects.

The use of magic (whether it be with fighting or healing) has started to look much better and less cheesy.

Mat has slowly become someone other than himself, whether the madness is setting in or if the mysterious knife started to cause his downfall.

Thom and Rand are very aware of Mat’s strange actions, leaving Rand quite concerned for his friend.

The show has progressed well with this episode, but having the group still separated leaves much to question.

When will they get back to Moiraine? Will all four of them survive? Are Ila and her people safe, or do they have ulterior motives?

What will happen with Nynaeve? Will Lan and Moiraine bring more Aes Sedai with them to the Tower?

When will Moiraine find out what happened to her chosen villagers now that she’s healed?

There are many questions, and the stakes are pretty high, with only four more airing in 2021.

So Fanatics, what did you think of The Dragon Reborn?

Did you enjoy learning more about the Aes Sedai?

What do you think will be next for these complex characters? Let us know in the comments below!

Catch new episodes of The Wheel of Time Fridays on Prime Video.