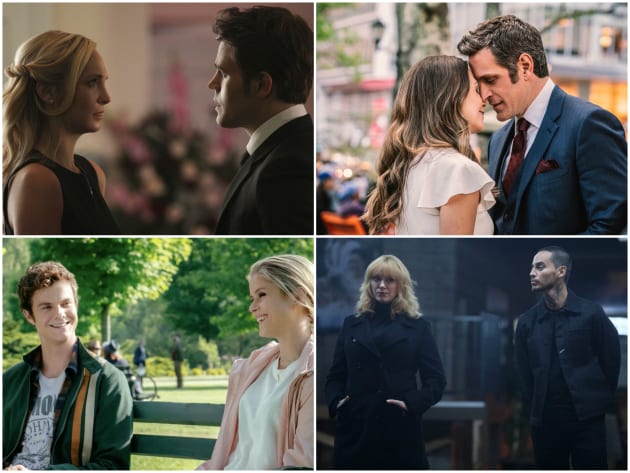 The Resident Round Table: Can Trevor Ever Win You Over?!

Conrad is back at Chastain!

It didn’t take much to get Conrad back to Chastain onThe Resident Season 5 Episode 7. But the hour had him helping AJ with his dying mother and assisting Devon in mentoring a problematic Trevor.

Laura: I’m not surprised, I thought it was adorable that he wanted to use Gigi as his hold-out, but they both belong there.

Meaghan: Obviously, I want Conrad back at Chastain, but I wish they had held out just a few more episodes. It pretty much made it pointless that he wasn’t working there after the time jump. Plus, I wanted to see more of him being a concierge doctor before he went back.

Carissa: I kind of wish he’d held out a little longer to allow some action away from Chastian. But I’ll roll with it.

Leora: It was a little quicker than I expected, but not by much.

Meaghan, I disagree. A lot of the time, time jumps will break up couples who are together just to find their way back to each other, and I hate that, but in this case, I think it made a lot of sense.

When Gigi was a newborn and Conrad was newly grieving and a new father plus a single father, it made sense for him to take a step back from Chastain, and the time jump allowed him to do that without us having actually to watch it.

We get to see Conrad at Chastain, but we can also respect him for taking those years to be with his kid.

Do you feel AJ has endured too much loss and too many sad storylines? What did you think of his arc with his mother during this installment?

Laura: Poor AJ. Am I the only one who wished Mina was there to hug him? I really did love the Conrad and AJ supportive scenes. I always have loved AJ’s relationship with his mom. I don’t want to lose Carol.

Meaghan: What an emotional rollercoaster! AJ deserves some genuine happiness. I agree that I wish that Mina could’ve been there to comfort him during this episode, but Conrad was the perfect guy to do it.

Carissa: His mother’s impending death was what kept him from leaving to be with Mina, so I’m happy she’s not around to lend her shoulder to the man she loved.

Otherwise, I’d be worried that Malcolm-Jamal Warner was heading out, too, and I will not stand for that. We’ve all got your back, AJ, and better things are ahead.

Leora: It was sad, for sure. I don’t know why they did that. I agree with Carissa that once his mother dies, there will be no real reason for him not to follow Mina to Nigeria unless they’re going to say that they both just moved on or something. I guess he did sleep with Padma.

Should Devon have given Trevor a second chance? Are you interested in Trevor’s inevitable redemption arc?

Laura: I understand why Devon did; he was paying it forward. I’m not really interested in Trevor.

Meaghan: Of course he should’ve. It was Trevor’s first day. He is still learning. How many times have we watched residents mess up on medical dramas and not get fired? As scary as it is coming from a patient perspective, it’s the process.

I’d be way more interested in him as a character if they would tone down his condescending attitude just a bit.

Carissa: They’ve not given the kid much to work with here. He’s been an ass from the moment we met him, and so far, I don’t think he’d be a great doctor. There’s no reason to play favorites because of his lineage.

He reminds me of that new chick on 9-1-1 who is condescending to May but whom we’re supposed to feel for this week after she cried on the job. Uh, no.

Leora: This show is good at turning characters around, and since I’m literally the only person in the universe who likes Billie, I’m interested in him sticking around too, but he was way out of line, and he should have gotten fired.

When they said what he did was like Devon on his first day, I just couldn’t. Devon made a mistake, but it is not the same as intentionally endangering a patient to prove a point!

Devon may have believed she was an addict, but the issue wasn’t him being wrong but how he treated her. If it had just been the bedside manner, I’d be annoyed, but I’d think they should give the kid a chance. Giving her a beer, though? What …?

Billie not only has made peace with Trevor’s existence there, but she’s the one who arranged for him to join Chastain. Discuss.

Laura: I prefer when Billie is reasonable. I wonder why all the other schools rejected him, and she had to pull strings at Chastain.

Meaghan: This was the first time since they introduced the character that I actually liked her. The way that she treated him before was intolerable. I’m a much bigger fan of this Billie.

Carissa: There’s obviously a lot more to that story, but we’re not going to see it. It’s an unfortunate issue with the time jump — everything is smooth sailing with the newbies at Chastain (Billie included), but we didn’t get to warm up to them yet. That’s the only thing about the jump that didn’t hit the mark.

Leora: If it makes you like Bille, Laura, then I’m all for it. And he probably needed the help because he pulled sh@#t like what he did with Hannah in med school. I’m glad she went to therapy and is in a better place. Good for her.

Are you enjoying the insight into Leela through her arc with her sister and parents? What are your thoughts on her parents’ stance on her profession and dyslexia?

Laura: I am enjoying getting more insight into Leela. I feel for her, and I hope at some point, her parents meet Devon.

Meaghan: I’m sorry, but am I the only one who is super confused? What is wrong with their parents? Leela is a DOCTOR! Isn’t that every single parent’s dream?

I get why they dote on Padma, but I just can’t understand how they could be so critical of Leela.

Carissa: Is this supposed to be a cultural storyline?

I cannot wrap my head around why they aren’t proud of Leela and what she’s accomplished despite their lack of support. Anyone else might have called it quits, but she’s soared. It’s too bad that AJ’s mom will not live, and Leela’s dad takes the fall for her.

Leora: It is weird, but different people want different things for their kids. I think they’re hung up on her disability, which I am glad the show is going into more. I like Leela a lot, and I’m enjoying her dynamic with her sister. I guess Padma is sticking around?

What was your favorite scene, arc, character, quote, etc., from the hour?

Laura: I really enjoyed when Padma stood up for Leela at the restaurant and back at the apartment when she comforted Leela. There is nothing like when a sibling has your back.

Meaghan: I love Padma after this episode, and I think she is an excellent addition to the cast. She brings such a great energy to her scenes.

My favorite scene was when AJ’s mom got all giddy when he brought Conrad to assess her. Lord knows all of us on this Roundtable can relate to how she must have been feeling seeing him walk into her room!

Carissa: My favorite scene was when Gigi schooled daddy on where she’d rather spend her time. He’s got nothing to fear about that little girl. She’s been raised well so far!

Leora: I liked the Leela stuff best, though Billie and Trevor’s scenes were good too. Overall, this episode had many good moments and was far superior to last week’s installment.

Over to you, Resident Fanatics. Do you agree with us? Sound off below!

The Resident airs Tuesdays on FOX.