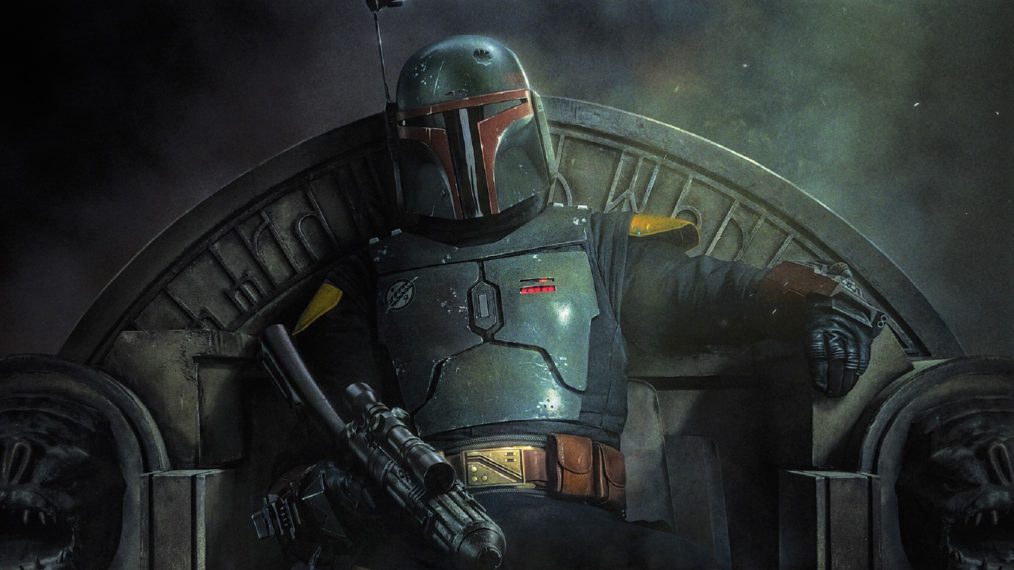 ‘The Book of Boba Fett,’ ‘The Mandalorian’ & the Trouble [WARNING: The following contains MAJOR spoilers for The Book of Boba Fett Season 1 episode 5, “Return of the Mandalorian.”]

A decade ago, when Mando (Pedro Pascal) wasn’t yet a beskar-gleaming, Darksaber-wielding twinkle in anyone’s eye, that quote would’ve easily fit another Mandalorian: Boba Fett (Temuera Morrison). A ruthless and stoic bounty hunter who adhered to his own code and rarely removed his helmet, pre-Book of Boba Fett Boba Fett oft feels like he was the blueprint for Din Djarin — and those myriad similarities might explain some of the fan pushback against Boba’s characterization in his series.

Pre-Boba Boba had a capacity for violence, but also, like Din, the capacity to care about the downtrodden or the innocent. Heck, at one point in the Extended Universe material Boba even becomes Mand’alor and leads the Mandalorian people, a position Din currently finds himself extremely reluctantly kind-of fulfilling since he holds the Darksaber. (Poor guy really suffered from his success in that Moff Gideon [Giancarlo Esposito] fight). There’s also the sense that at the end of the day, what both characters are searching for is family; Boba lost his to Mace Windu (Samuel L. Jackson) on Geonosis when the Jedi beheaded his father, and Din keeps losing his, whether it be his parents, Grogu or the Children of the Watch. Point being: These characters have a ton in common, to the point where it’s impossible to ignore.

It’s also impossible to ignore how those parallels might’ve impacted The Book of Boba Fett. Because Din and Boba are quite alike, efforts were probably made to differentiate them — otherwise, if The Book of Boba Fett was about Boba and Fennec (Ming-Na Wen) jumping around the galaxy to ally with or take down other crime families, it might wind up feeling quite a bit like The Mandalorian’s “mission of the week” structure. And because the two protagonists have so much in common, in an effort to separate them, Boba was probably softened a bit from his previous appearances. And thus, Din can “bring you in warm or cold,” and Boba “rules with respect.”

This is not inherently a bad thing; characters evolve, change and go through arcs. But there’s no denying it’s where some of the controversy stems from. Softening Boba doesn’t go totally against his characterization in previous Star Wars material, but it does go against the decades-old mentality that Boba is a stone-cold badass. Boba has been many things in his show, but “stone-cold badass” isn’t exactly one of them. Other than taking down the Nikta biker gang and the fight scene at Tosche Station, he hasn’t gotten much of a chance to showcase his skills. (If anything, his consigliere Fennec seems the better choice for crime lord at this point; she consistently gives Boba solid advice, isn’t afraid to be ruthless when it counts, has decades of experience and knowledge as a master assassin and knows exactly what to do when Boba says he has credits but needs “muscle.” Money can be exchanged for goods and services, Boba!)

Boba is also bogged down by his own history in a way Din is not. What fans did know about Boba shaped their perceptions of him for decades in ways that The Book of Boba Fett sometimes appears to go against. It’s hard to imagine this version of Boba being told “no disintegrations,” or even talking back to Darth Vader. Heck, he thought Fennec was being too harsh for threatening the mayor’s majordomo. Again, there’s nothing wrong with that shift, but the character’s portrayal in the original trilogy and his backstory created a version of him that doesn’t always seem to go hand in hand with the version of Boba seen in The Book of Boba Fett. On that, Din has an advantage. While Boba is beholden to his less than ten minutes of screentime in the films and decades’ worth of content that spun off from them, Din is an entirely new character with an entirely new story. There is no “other” version of him, and thus no confusion as to why he makes certain choices or acts in certain ways. Some of The Book of Boba Fett’s sins, in certain fans’ eyes, might be redeemed in the final two episodes. Now that we’ve rounded the corner out of the Bacta-induced flashbacks and Boba has been pronounced “fully healed,” we just might see him let loose on the Pykes and prove that the stone-cold, ready-to-shoot-an-adorable-green-alien-to-get-his-armor-back side of him is still there. A few scenes of Boba really going to town on some rival gangsters might go a long way in proving that the Boba of previous material and the Boba of The Book of Boba Fett are the same person — just changed a bit, as a near-death experience would understandably inspire. And undoubtedly, we’ll have other cameos to anticipate; it’s hard not to ponder whether we’ll be seeing Grogu, any of Boba’s former bounty hunting squad, Cad Bane or even infamous Solo crime syndicate Crimson Dawn in the show’s final hours.

For now, it’s hard to say how The Book of Boba Fett will conclude, who will show up, what path its protagonist will choose to follow and if his ruthless streak will re-emerge. A lot can happen in two episodes, especially if those episodes are an hour long. In the end, as Kylo Ren (Adam Driver) once said, perhaps it’s best to “let the past die.” In becoming a crime lord Boba has taken his story in a different direction, away from bounty hunting, carbonite-freezing and disintegrations.

But if you miss the Boba Fett of old, there’s always Din Djarin.