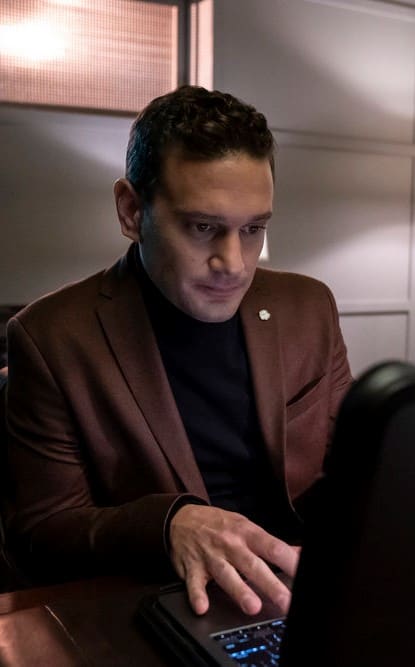 Isn’t it great when a series has been on so long that it can resurrect a memorable character?

That’s just what happened on The Blacklist Season 9 Episode 3.

Stacy Keach’s Robert Vesco returned a conman who escaped with $60 million of Red’s money on The Blacklist Season 6 Episode 13. The character was a nod to the fugitive American financier of the same name.

Now for the critical question: Did Raymond know about Vesco’s involvement with the SPK when he sicced the Task Force on them or was it entirely dumb luck?

I’ll tentatively go for the latter option, although he didn’t look at all surprised when Vesco arrived for the meeting with the buyer, Reddington.

But does Red do anything without an ulterior motive? Maybe it was simply to score brownie points with Harold in the hopes of getting to see Agnes. Maybe not.

Vesco didn’t seem shocked to see Red sitting there either, even though he knew he was in trouble. They just run in the same shadowy circles.

Despite the former betrayal, they just caught up like old friends, with Vesco describing his latest con, pretending to be the philosophical Giovanni for the anti-religious zealots the SBK.

And Vesco did have a sweet racket going, having his gang steal religious icons, pretending to destroy them, but then selling them instead.

But he also knew the end was near, as his group had violent fanatics who wanted to make explosive statements rather than just winning hearts and minds. He didn’t know how soon.

And once Raymond had Vesco, he wasn’t letting him out of his sight, which meant that Vesco was even less in contact with what SBK was doing.

Reddington was doing what he did best: controlling intel. He was OK with the Task Force going after SBK. But he wasn’t going to let out the true identity of its leader.

But the Task Force wasn’t going to stay in the dark for long. Just doing basic legwork eventually got them to Vesco’s identity.

It helped to have Dembe on their side now. Only his years of being by Red’s side would enable him to find the compartment hidden inside an ordinary American Legion hall.

Because Vesco was careless with his fingerprints, the Task Force, law enforcement, and the dissidents soon knew of his involvement with SPK.

That was the wrong time to be in a room with such dissidents. Fortunately, Raymond sauntered in to bail him out.

Or instead, Weecha did when his threatening tone didn’t do the trick. She’s a worthy successor to Dembe, at least on the protection front. She isn’t nearly as philosophical as him.

So who saved the day? Was it Aram’s programming skills or Weecha’s shooting ability? Which shut down the bombs?

Dembe made a boss move, snatching Vesco off Red’s plane before they could escape to Vesco’s bank in Malta. He explained that he had to make the arrest for acceptance in his new world and, out of respect for their longtime friendship, Raymond went along with that.

Despite the decades that he spent as Reddington’s protector and confidant, Dembe never appeared utterly comfortable in Red’s world. So that’s why his transition to the FBI seemed so believable, at least on a philosophical (if not practical) level.

With his sketchy background, how dare Ressler question Dembe’s fitness as an agent? While Donald was off self-medicating his sorrows in Detroit for two years, Dembe was undertaking dangerous assignments for the FBI.

Dembe, along with Aram, may have the purest motivation among the Task Force members.

Aram proved where his alliances lay again this episode, prioritizing the team over his private venture that he had been working on for the past two years.

And he did that despite knowing that his parents would be disappointed, especially since they had little clue what he does for the government. Clerk, indeed!

At first, it seemed that with Dembe added to the Task Force, maybe Aram would be leaving for real, especially after his angel investor came through.

But no, in the end, he stayed where his heart was, and that wasn’t his security software suite, which is excellent since the squad wouldn’t be the same with his naivete.

You knew there had to be a reason for Harold bringing up the random drug tests and for Ressler to be so concerned about them.

He tried to cheat the test, but Park, the child of addicts, caught on to what he was doing.

And she won’t hesitate to hold that chemical he tried using over his head until he gets clean again.

Poor Red can’t get go of that little piece of Elizabeth that remains: Agnes.

Not content to keep driving by her soccer games, he finally asks Harold for permission to meet in person with Agnes.

It was the right call on Harold and Charlene’s part to only allow him supervised visitation at first. Trouble does follow him around, and they don’t want her getting caught up in it.

Their meeting did go well, with Agnes fondly remembering her time with “Pinky” just before her mother died. More such sessions will help to humanize Red.

Were you happy to see Vesco again?

What has Ressler gotten into now?