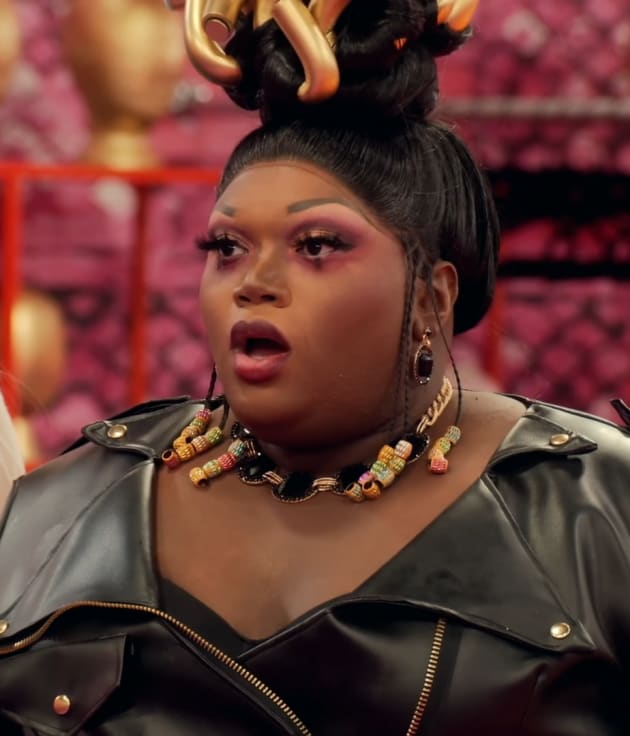 The split premiere format welcomed a new batch of seven queens into the Werk Room to strut their stuff and show off their talents. Same structure, same pacing, and same season premiere glow, just with new faces in the mix.

Did the seven new queens steal the show? Or did RuPaul’s Drag Race Season 14 Episode 1 set the bar too high?

Split premieres are a great way to get to know the queens. We learn their talents, get an idea of their drag personas and what fashion they’re bringing to the main stage.

“Big Opening No. 2” was no exception. The second premiere week captured the same fun frenzy we had expected from a split premiere.

Though, the thrill of the uncertainty doesn’t hit the same punch when we’ve already experienced this same round.

Why not change it up with a different Maxi Challenge? A new Mini Challenge?

Sure, it’s only back-to-back weeks, but when we can predict the structure of the round beat-by-beat, it loses some shine. The format didn’t drag down the episode; it simply dragged on the pacing.

Based on the Werk Room entrances alone, Jorgeous, Jasmine Kennedie, Angeria Paris VanMichaels, and Lady Camden had the best looks that stood out.

Jorgeous and Jasmine were opposites where one had a sexy outfit (Jorgeous) while the other had a polished look (Jasmine). However, their dance backgrounds shined completely in their dresses. They both looked ready to dance and show off their stuff.

Angeria’s gown had a sophisticated touch to her look that screamed both camp and pageant. I loved the use of the parasol that matched her black and red polka dots. She was serving upbeat elegance.

Lady Camden, on the other hand, was pure fun! Anyone who channels the vibe of the Spice Girls and slays in their look is a winner.

Both took a campy approach with their entrances, but the queens either didn’t push themselves or check the finishing touches. DeJa’s pink polka dot dress seemed like loose fabric, while Maddy wore a black dress with fire lining.

And with Daya Betty, her look was very 80s grunge, but those sharp bangs could give Gale Weathers in Scream a run for her money.

The Mini Challenge of the tic tac photoshoot was another round of aimless fun. As mentioned in the first premiere, the way to win this photoshoot is to either serve fierce looks or get RuPaul to laugh.

Lady Camden didn’t have a sickening photo, but her jokes won her lots of favor with RuPaul. I wouldn’t be surprised if she sticks around for a long while.

Angeria easily won with that stunning photo. She served style and opulence the second she stepped into the giant bowl; it’s almost as if she had done that before. We’ll have to keep our eyes on her; she might be a strong contender for the finish.

I wonder how the others would’ve reacted to seeing RuPaul having the same tantrum. Was it only DeJa who got it, or did the others get it too?

In the case of the Maxi Challenge, did anyone else guess that the majority of talents would be lip-syncing or dancing?

There needs to be a new rule that limits it to trained dancers or singing live only. The queens rely too much on this talent that it doesn’t feel new or fresh anymore.

Plus, it’s an easy way for a queen to win the round.

RuPaul loves big dance moves and jaw-dropping lip-syncs. It’s no secret that she favors them. She brings the same results to us every RuPaul’s Drag Race All Stars season, and it happened recently too, with Kornbread winning with her original song.

There was no surprise for who would be walking away with the win.

Angeria Paris VanMichaels had this round in the bag.

She checked off everything needed to snatch the victory between the stunning Mini Challenge win, her electric talent show, and her fabulous runway outfit. This round was hers to lose.

Granted, Angeria didn’t have the best vocals for her song, but she served those words and moved on the main stage like a pro. She gave all those judges and the queens a show to watch.

Angeria might have the stage presence and star quality to carry her to the end. It’s the same energy that Jaida Essence Hall and Symone had in their first weeks on their winning seasons, so this could be a repeat for the third year in a row.

I agreed with the judges that the other top talent show performances came from Jorgeous, Jasmine Kennedie, and Lady Camden. The other three had slow numbers or didn’t structure their performances right to make a splash compared to them.

Jorgeous and Jasmine will definitely be lip-sync assassins to watch! Jorgeous had plenty of fire with her moves, and Jasmine shocked me when she flipped backward into the air. Both made it clear that the other queens should be scared if they end up at the bottom against either of them.

Lady Camden didn’t have the same dancing punch, but her quirky tribute to Center Stage was a nice touch. (And RuPaul is wrong; ballet isn’t boring!)

For any lovers of the iconic dance movie: We see you. We hear you. We’re with you.

The “Sickening Signature Drag” runway brought out the fashion powerhouses from this batch of queens. Most of the ensembles slayed the runway and left us gagging for air.

Jorgeous looked stunning in her stoned bodysuit and amethyst gown, but I would’ve loved it if she had kept on the gown part longer. The reveal underneath was beautiful; the entire ensemble looked more refined before the reveal.

Jasmine, DeJa, and Angeria gave the judges a show with full opulence and eleganza. These signature looks could’ve been their finale looks, so each queen made sure to leave her mark.

And Lady Camden proved yet again that she’s following the beat of her own drum. Her peacock 90s rave girl was a campy touch that set her apart from the rest of the group. I can’t wait to see more from her.

Maddy’s runway look might’ve been what saved her. Her headless Marie Antoinette was the type of outfit that would get plenty of laughs and some kudos for thinking outside the box.

The judges love to reward originality; this gimmick was something they’d never seen before. And we as viewers got something new from the tired Marie Antoinette trend. So, congrats Maddy for trying something new.

On the other hand, Daya Betty looked too much like Crystal Methyd from RuPaul’s Drag Race Season 12.

From the makeup to the hair to the outfit (and even her voice), it felt like Crystal came back for another season. The ribbon dress was original and looked beautiful from the front, but the back was a hot mess. And it still didn’t set her apart from the other queens.

Just like Orion Story the week prior, this was a rough week for Daya that sealed her fate for a bottom two placement.

The lip-sync of “Fallin'” by Alicia Keys captured full emotion and heartbreak.

DeJa Skye felt the song’s essence the second she removed the cerulean fabric from her gown. She was vibing to the beat and brought out emotion into everything she did. She embodied this song.

Daya Betty had her emotional moments too, but the scratches on her shoulder took me out of the performance. I couldn’t help but worry about her bleeding and getting a medic to check it out.

The scratch worked with the song, but at what cost? At least she put her blood, sweat, and tears into trying to survive.

Slow songs are hit-or-miss on Drag Race since it’s a low-tempo beat, and there aren’t many high points. It was a good lip-sync that hit its mark; nothing too special that blew us out of the water.

Last Thoughts From The Werk Room:

Now, over to you, Drag Race fans!

What was your favorite talent? Which entrance look blew you away? Are you sad to see Daya Betty go?