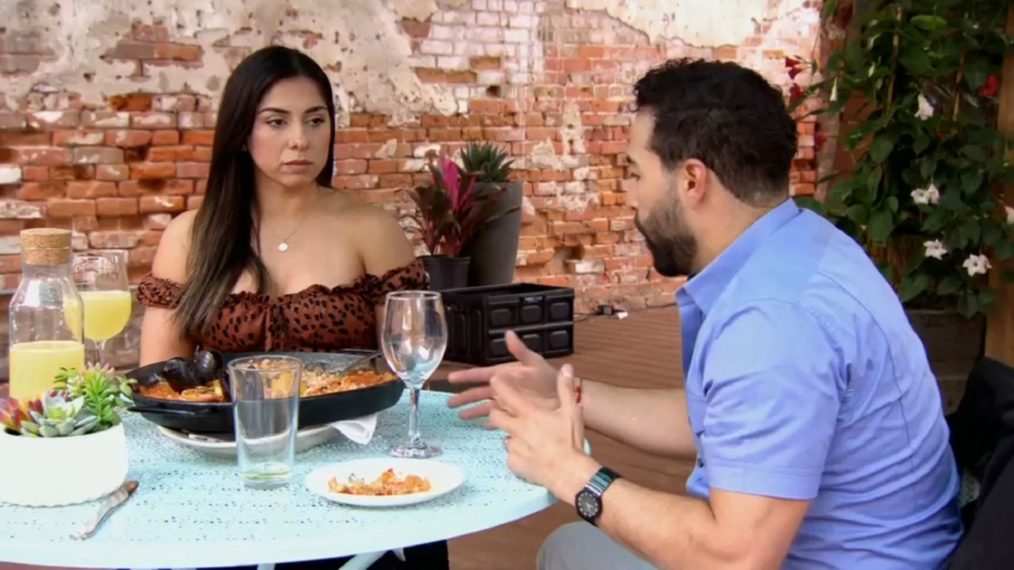 ‘Married at First Sight’: 4 Key Moments From ‘Weighing the [Warning: The below contains MAJOR spoilers for Married at First Sight, Season 13, Episode 16, “Weighing the Decision.”]

Decision Day looms on the horizon for Married at First Sight‘s Season 13 couples and the latest episode, “Weighing the Decision,” is shining a light on the pros and cons of each relationship.

From problematic dynamics to solid footing, the five pairs have a range of strengths and weaknesses and it’s all being put on the table ahead of the biggest day of their lives. Below, we’re breaking down all of the drama and key moments from the installment but beware of major spoilers. The episode opens with the couples taking time apart from each other to get the perspective of friends and family in one-on-one meetings. First up is Ryan who plays some tennis with pal Michael who listens as Ryan details his misstep of signing up for a dating app and being caught by wife Brett. Ryan admits he feels bad and is apologetic especially when he and Brett were beginning to find common ground at that point in their relationship.

Michaela’s sister Shareefa drops by her apartment to learn more about her issues with Zack, which Michaela explains have been somewhat smoothed over after their meeting with Dr. Pepper in the last episode. Although Bao is upset that Johnny sought advice from her best friend Sarah, she tells other pal Anh that she’s willing to keep trying if he apologizes.

Rachel also meets with her friend Lirice, who she opens up to about Jose and his pros and cons. For Rachel, there are a lot of pros, but the biggest cons are his inability to listen sometimes and any reactive fights as they’ve had in the past. Myrla’s friend Quiana listens as the newlywed admits she can be a handful for Gil sometimes but that her biggest concern heading into Decision Day is her husband’s more frugal approach to finances.

On Jose’s side of things, he tells his buddy Emmanuel about concerns regarding Rachel’s faithfulness and their disconnect on communication at times, otherwise, he’s feeling fairly positive as Decision Day approaches. Johnny gets feedback from friends Jerick and Kenny about his next steps with Bao as they push him to consider what’s a deal-breaker and what compromises he could make in the future.

Gil consults his mother over the phone via Facetime and worries that Myrla’s negativity and materialistic side could bring things to an end. She encourages that as long as Gil and Myrla are communicating well and can respect each other, that’s what’s most important. Brett returns to her shared apartment with Ryan to discover he’s moved most of his things out of the living space. She shares a frustrated call with her sister in which she laments his lack of efforts in their union. The participants continue to go about their daily lives and in a meet-up between Gil and Zack, Gil learns the reason behind Zack’s argument with Michaela at the retreat. Ultimately, Zack shares that he and Michaela have smoothed things over, and Gil is impressed to hear that Michaela took responsibility for overreacting.

Meanwhile, Rachel and Jose sit down for a date to discuss their current relationship status and their concerns heading into Decision Day. She worries that communication could be their pitfall and explains that ending things over small arguments scares her. Jose agrees, but he’s not eager to listen when Rachel brings up traveling, which to her means taking a big European trip every other year.

Gil and Myrla go rollerblading and kid around on a solo date, but things soon turn serious when they sit down to talk. Although they’re both having fun in the marriage, he is worried that Myrla can be bratty and let her big-spending get in the way of seeing things from a more humble perspective. She admits that money does motivate her actions, but could this really be a deal-breaker for the duo?

Bao and Johnny also have a date of their own during which he admits that having talked with his friends has encouraged him to keep trying, but when it comes to Johnny it’s never a definite thing. In one last group gathering before Decision Day, Brett and Ryan come face to face for the first time since his dating app blunder, and Gil poses the big question of where everyone is at leading into the big day. Jose and Rachel say they’re feeling good, while Gil is quick to reveal that if Myrla doesn’t start adapting to being married and continuing to live as though she’s still single, that will be a deal-breaker for him. Brett says that feelings need to be mutual between her and Ryan heading into Decision Day if she’ll say yes, essentially hinting that she’s most likely to say no to staying married.

Johnny reveals that if he sees potential with Bao, he’ll be saying yes on Decision Day, but she notes that it takes two to make a marriage work and only one person to end it. Whether that’s a threat or not remains to be seen. Zack doesn’t see a no on Decision Day as a failure because he doesn’t plan on giving up the relationship with Michaela either way. Bao interjects that if she were to receive a no, she’s not sure she could emotionally recover, that it’s over the minute that decision is made.

Michaela attempts to defend Zack’s logic, but it’s certainly an angle to ponder. The group caps off their night with a bittersweet toast as this could be one of the last times they’re all together in a fun way like this. They then take a moment to discuss what they’ve learned about themselves along the way. Brett says that she’s been able to overcome things easier than she would have believed. Rachel used to see arguments as an ending but has learned that they’re just a bump in the road, Bao’s working on being kinder, Johnny and Zack both discovered they’re rather emotional, and Gil has been more vulnerable than he could have believed. The couples turn in for the night knowing it will be their last together before Decision Day. As they all reflect on the experience, Rachel admits she isn’t sure but she’s happy for the time she’s had with Jose who adds that he has some regrets but she’s not one of them. As for Myrla, she’s feeling good, but it’s clear that Gil is having some second guesses heading into the big day. Johnny and Bao share a final drink and try to work through their chaotic feelings with both of them being unsure of how they’ll proceed. The episode ends with all of the couples parting way for a day and night alone before they reunite for Decision Day in the next episode. Stay tuned to see how things unfold as the romantic experiment comes to its eight-week conclusion.

Amazon’s Alexa May Soon Talk In Your Dead Relatives’ Voice

Legacies: Six Reasons the Spinoff Failed To Reach the Success

Interview with Sarah Forester Davis, Author of Her Name is

Ecological toll of Japan’s switch to farming revealed by 1850s

The Internet Origin Story You Know Is Wrong

6 Best Camping Stoves for Any Size Group (or Budget)