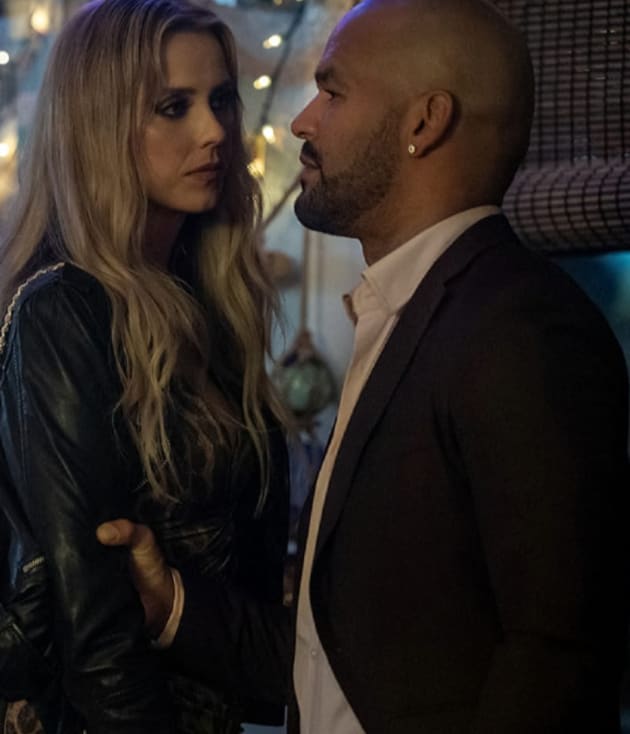 Hightown Season 2 is off and running.

The series continues to impress with its compelling characters, some of the most well-written on the small screen.

Hightown Season 2 Episode 4 is set to air Sunday, November 7, and finds Renee in a wild situation.

TV Fanatic has an exclusive clip of the game-changing episode.

Leslie calls Renee to a meeting. Jackie accompanies Leslie, and Renee is immediately concerned about what the two women want.

Renee was an informant at one point, and Leslie tries to act like Renee did the department such a big favor.

Renee is too smart and knows they are both after something else, and she doesn’t want to betray Frankie in the process.

The trajectory of the conversation changes the moment Leslie says they want Jorge.

Jorge has been getting under Renee’s skin since his arrival on Hightown Season 2 Episode 1, so of course she would love nothing more than to see his downfall.

But Renee also knows that working with Leslie to take him down could come back to haunt her.

Frankie is all about family, and if he learns the truth, she could be in a lot of trouble with him.

The clip ends on a somewhat ominous note, and we cannot wait to see how it plays out when the episode drops on Starz and Starz Play.

Here is the official logline for the second season:

In the second season of “Hightown,” the picture-perfect version of summer on Cape Cod clashes with its off-season reality. Jackie Quinones (Monica Raymund), achieving her dream of becoming a real cop, is out to do some good in this world.

Thrust immediately into the crime wave of deadly carfentanyl flooding the Cape, Jackie is laser-focused on bringing down drug dealer Frankie Cuevas (Amaury Nolasco), the man Jackie holds responsible for the death of her best friend, Junior. For Jackie, it is personal, but then again, for Jackie, everything is personal.

When Frankie’s cousin Jorge (Luis Guzmán) joins his operation, he introduces a new level of violence and chaos.

With disgraced officer Ray Abruzzo (James Badge Dale) off the force and mired in depression, Jackie finds a new partner in Leslie (Tonya Glanz), the only other female on the force.

Through it all, Jackie must walk the tightrope of sobriety as she struggles to stay above an ocean of secrets, betrayal and the shame and failure of her past. Riley Voelkel, Atkins Estimond, and Dohn Norwood also star

Check out the clip below.