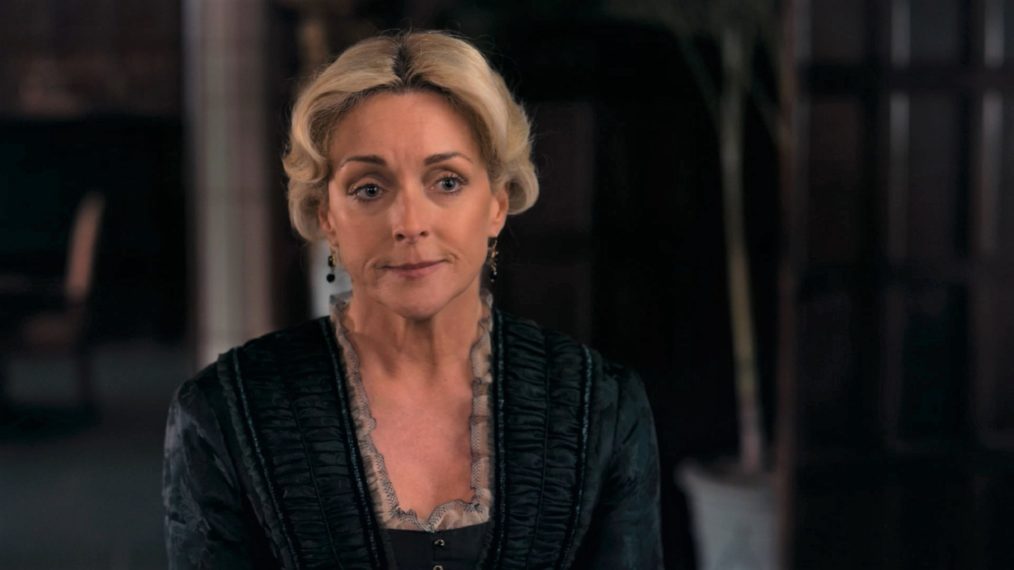 [Warning: The below contains MAJOR spoilers for Dickinson, Season 3, Episode 6, “A little Madness in the Spring.”]

It’s tough being a matriarch, especially when she oversees a family as rambunctious as the Dickinsons, but Jane Krakowski‘s character has been dealing with a lot since the Season 3 premiere of Apple TV+’s Dickinson.

Opening the season, Krakowski’s Mrs. Dickinson is seen burying her sister, and a civil war within her own family only exacerbates the tensions surrounding the actual battle taking place across the nation. And despite it all, Krakowski’s enjoying herself. “It’s my favorite season that we filmed,” the actress gushes. “The comedy is very different than comedy I’ve done in the previous TV shows that I was on, and not only was that exciting to me, but the show also lives so truthfully in its heartache and in its exploration of who these people are.”

In Season 3, Mrs. Dickinson is grieving, and although it might take most of her family a while to catch on regarding just how much she’s suffering, in the meantime, she’s discovering possible solutions for the pain. The latest episode, “A little Madness in the Spring,”sees Mrs. Dickinson and her family as they visit a lunatic asylum for a possible job opportunity being presented to her husband Edward (Toby Huss). “She really just wants to go there for a rest, from being a woman in that century,” Krakowski shares. Initially, her character isn’t too keen about visiting the institution, until she realizes that many of the patients are women who are looking to escape the duties of their households, if only for a short while.

“That’s kind of where the humor of this show lives,” Krakowski acknowledges. “That’s exactly what is unique to the show that we learn truths about the characters, but there is also so much humor rooted in the time period that the Dickinsons were living in.”

“When you get a script like that,” Krakowski says, “I sort of feel a thankfulness that we do actually learn more about Mrs. Dickinson, but we also get so much humor at the same time.” Helping bring a certain authenticity to the screen is the on-location shoots that took place for the asylum scenes.

“They found the most beautiful location, which is something that’s been very consistent through all three seasons,” Krakowski gushes. “Our DP is unbelievable and how beautiful it is, the costumes, the sets, the locations are such a large part of what Dickinson is, and they excelled as always in Season 3.”

Tune in to see where else the show will take viewers as Season 3 heads into its second half on Apple TV+.