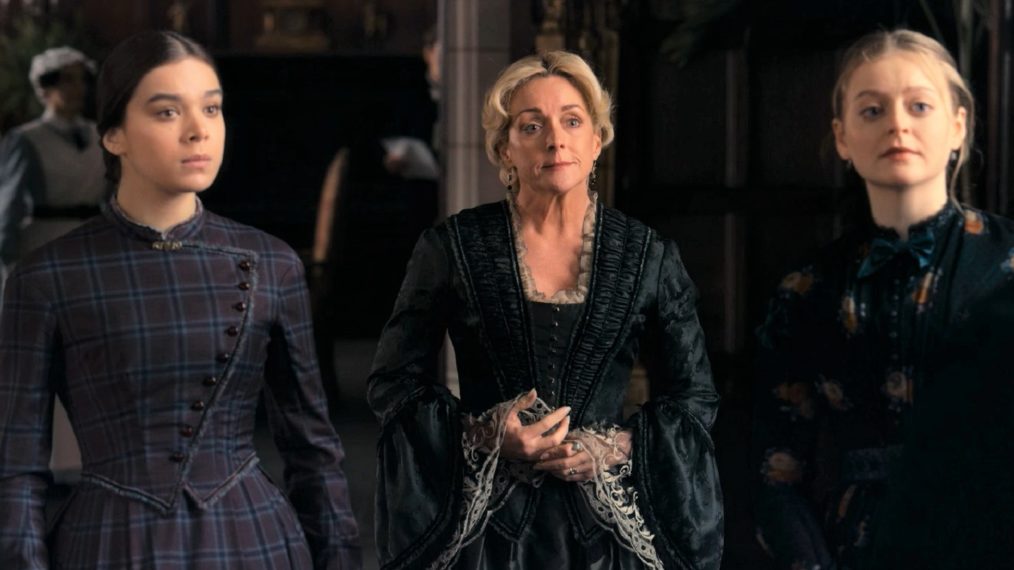 ‘Dickinson’: Emily & Her Family Visit an Asylum in a Dickinson is taking viewers to the asylum in the final season’s latest episode, “A little Madness in the Spring.”

In an exclusive first look clip of the Apple TV+ comedy, Emily (Hailee Steinfeld) and Lavinia (Anna Baryshnikov) join their parents Mr. and Mrs. Dickinson (Toby Huss and Jane Krakowski) on a visit to the local asylum. But as thrilled as Mr. Dickinson is to be touring the space under the guidance of an asylum employee, his wife is on high alert. As he lists off reasons for some of the patients’ admittance to the facility, Lavinia can’t help but wonder aloud, “Being unmarried is a mental illness?” before adding, “no, yeah, that feels right.” And while the youngest Dickinson child may sound resigned to the possibility of being a viable patient candidate, Mrs. Dickinson would do anything she could to prove otherwise.

While the guide continues on his list, when he reveals “melancholia, more commonly known as grief,” as a reason for being in the asylum, Mr. Dickinson can’t help but draw parallels to Mrs. Dickinson’s recent bereavement over the loss of her sister.

“Oh Edward, I was not, you liar,” Mrs. Dickinson animatedly reacts to Mr. Dickinson’s observation of her. “Me, mourning my one and only sister? Unlikely. I’m over her. Good riddance to that woman,” she says loud and proud to deter any consideration for a spot among the asylum’s patients.

Tune in to the clip, above, for a peek at what’s come, and don’t miss the Dickinson family’s visit to the asylum when it premieres this weekend.