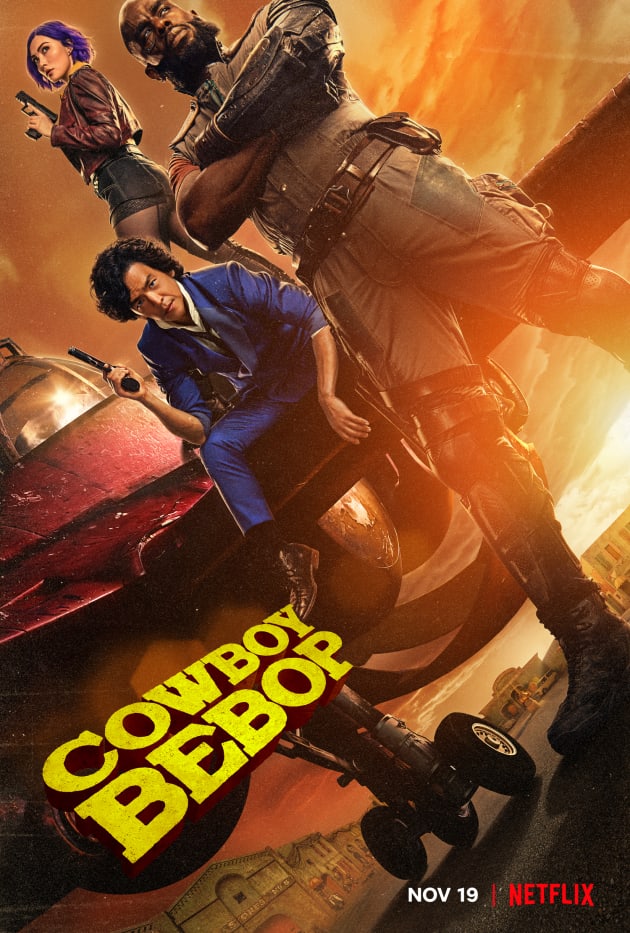 As the penultimate offering of the season, Cowboy Bebop Season 1 Episode 9 provides the context for how Fearless became Spike, Julia ended up with Vicious, and Vicious became that much more Vicious.

So far, the season’s provided the elements of this triangle that haunt Spike as signposts along the way. We’ve seen his memories as flashes and, on Cowboy Bebop Season 1 Episode 6, all his insecurities actualized by the Londres AI Program.

We know from Mao’s request on Cowboy Bebop Season 1 Episode 5 that Julia sang professionally before she married Vicious, a talent he now guards jealously.

I’ll admit the conversation Fearless and Vicious are having as they wait for their target is more than a little odd, but it sets the tone for their relationship.

They are clearly friends who are comfortable discussing manscaping with each other. So, yeah, there’s that.

And, when innocent bystanders witness the hit, we learn that Fearless has a code, while Vicious does not.

All in all, we learn a lot very quickly.

Before the blue suit, Spike wore the black suit of a Syndicate hitman. As Fearless, he not only understood the organization, he was trusted to be Vicious’s handler.

Their capo, Stax, is very about his expectations. Fearless MUST keep Vicious from screwing up the negotiations with the Neptune cartel.

And that’s when the professional tensions begin.

We should note a few things about Julia’s first performance at Ana’s club.

One, she wasn’t scheduled. She wasn’t even a singer. She was the hair and makeup girl.

Two, she didn’t want to perform. Gren and Ana forced her to take the mic.

Three, she only sings one song. Ever.

It’s indicative of Fearless and Vicious’s respective personalities that, although they are both smitten by Julia’s debut, only Vicious makes a move to court her.

Fearless would probably have kept quiet forever if Vicious hadn’t been reprimanded for his behavior with the Neptune negotiations, putting him into a funk and prompting him to ask Fearless to partner with Julia on the dance floor.

And Fearless would’ve continued to keep his love secret if Vicious hadn’t killed Ka-Ching in the street, which necessitated Fearless taking a shaken and distraught Julia home.

Ultimately, Vicious made the bed for Fearless and Julia, although they had to choose to use it.

There’s always a choice. That’s why you came. I haven’t survived on this sweet, spinning sphere by chance. I did it by taking power. You have the power. You control your destiny.

Once that stone started rolling, it was always going to end badly.

Ana tried to warn Fearless but probably saw that it was no use.

I have to wonder how Caliban learned of the relationship and whether the leak came from within Ana’s establishment.

Ana has always dealt in information, so you’d expect she’d have safeguards for that sort of thing. The Elders could have had eyes on Julia since she was in an “evolving” relationship with Vicious.

Fearless’s loyalty to Vicious is his downfall, and it’s not like the writing wasn’t on the wall.

Massacring the Neptune delegation at the Blue Crow singlehandedly is probably something most killers would take pride in. But not Fearless.

To save Vicious, Fearless breaks his code and kills a child.

I know you think you owe him. But a sane person would wonder, ‘How long are you gonna pay that debt?’

That’s the death knell on his life in the Syndicate.

It’s not an inspirational love story. Julia and Fearless make choices as reactions rather than with any real goal in mind.

Which, honestly, sounds like a page from Vicious’s playbook.

I imagine if they’d come clean with Vicious, there would’ve been a fight, and Fearless would’ve died. Permanently. And Julia would’ve been worse off.

The tragedy is dragged on for years because Fearless doesn’t return, allowing everyone to think he’d died.

But, again, letting them know he lived wouldn’t have improved things for anyone.

In essence, this is the deep-dive episode for Vicious.

He recounts his childhood trauma of being forced to watch his mother die to Fearless in the very moment Fearless is meant to execute him.

Later, Caliban visits, and it’s apparent their relationship has not improved one iota.

There is no excuse to be made for Vicious’s behavior and actions. He is the definition of a mad dog that needs putting down. This is true in the present-day as capo, but it was also true when he was still a Syndicate soldier.

Caliban and the other Elders were complicit in their own murders, allowing Vicious to remain in the Syndicate.

Everyone thinks they’re so strong. Until they’re not.

I’ve described this series as a melodrama before. There’s nothing wrong with melodramas. They tell stories filled with extremes.

By filling in the backstory of the love(?) triangle, they’ve illustrated in detail the extreme events that created the present-day situation.

And now, we are prepared for the climactic final confrontation, knowing how everyone got to where they are.

Who are we kidding? I don’t think anything will prepare us for the finale.

Who will be left standing? Those of you who know the source material know how that narrative played out.

Based on the tweaks they’ve made to this adaptation, who has money on a different ending?

Has this adaptation met your expectations? Where has it let you down?

Fill up our comments section with your greatest hits and misses of the series!