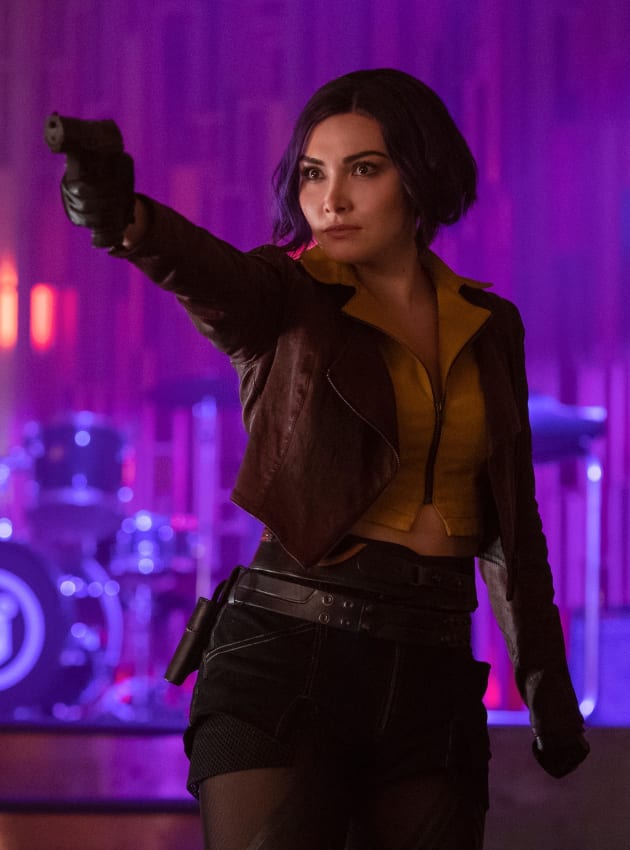 While the real Spike and Julia are being kept apart for narrative reasons, Cowboy Bebop Season 1 Episode 6 does a little end-run around that device by having the Londes AI root around in his brain.

The production team had a helluva time with this Matrix-like adventure, I can tell. The visual effects as the AI simulation began to degrade were highly effective.

With the multiple iterations of Julia and Vicious popping up in the simulation, it’s probably for the best that the real ones never make an appearance. It could be confusing.

While the deep dives into Faye and Jet’s stories have played with context and time, respectively, it’s appropriate that Spike’s backstory emerges through his subconscious.

Although, before he ever goes under, it speaks to his esteem for their partnership that he was willing to check out a lead he thought was total bunk just because Jet said he should.

Jet: Since we’re going to be grounded for a few more hours, maybe you can make yourself useful.
Spike: More useful than normal?
Jet: That’d be a win.

Of course, with what happened, he may be more cautious the next time.

It’s also a little disconcerting that psychotic AIs are able to switch themselves back on, create fake personas, and lure victims in so they can feed on their consciousnesses.

It’s fascinating to consider that every scenario Spike experiences in the simulation is spawned from his own consciousness.

One can extrapolate that he’s dreamed extensively about seeing Julia again for the past three years, as well as all the ways she could be taken away from him again.

When she begins to push him away, those words are the ones he fears he’ll hear from the real Julia. Having him throw his worst insecurities in his face would only heighten his sense of worthiness and worth.

Who are you kidding? Everything you touch dies.

Although he was known as Fearless, there are some fears one can never shake.

I liked that each time the simulation restarted, Spike chose a different route., demonstrating how his brain kept trying to solve the situation, motivated to save Julia.

That one of the last ideas he has is to take Julia with him to the Bebop speaks to his desperation level as he is willing to bring her to Jet’s ship where he’d be forced to come clean about his past.

And as the AI closes in on absorbing his consciousness, Spike is still unwilling to let go of Julia. Is that why the simulation Vicious shot him instead of Julia? Or was that the AI’s last-ditch revenge for having the power cut off to its mainframe?

They say if you die in your sleep, you’ll die in real life. Or was it Spike’s subconscious actualizing his fear that Vicious would kill him once again?

I’m surprised there wasn’t a scenario that involved taking Julia to Ana’s club. I would expect since she was an ally in that life, she’d still be a haven.

The ship repair part of the storyline was a bit of a mess, even if it was super cute.

Mel and Faye are obviously the super cute part of it. Faye figuring out she’s gay after two years of bounty hunting seems a little far-fetched, but okay.

Faye: You don’t know where to turn. Who to trust. You have no frame of reference. The first time you touched a hot kettle, or skinned your knee. Because you’re already a grown up. No one to lean on. No one to be loved by.
Mechanic: I don’t know who you were, or what you forgot, but I don’t think that changes the soul. And I can see you got a really, really good soul.

Their pillow talk worked well as a way for Faye to be painfully vulnerable with someone. It’s not a side to her I can see coming out around Jet or Spike.

Whether Mel signed up for keeping an engine room from blowing up while the ship’s flying, or if she considers a nooner appropriate barter for being effectively kidnapped, we’ll probably never know.

I’ll admit the railgun plot point made for a solid deus ex machina moment. Especially since I find it highly unlikely Mel’s a bobby pin sort of lady. And more to the point, would she really still have one in her hair after EVERYTHING she’d been up to that day?

I have so many issues with the Londes AI and Dr. Kaypack. Like, seriously, what the actual heck?

From Kaypack’s account, he created the AI; it became psychotic and killed THOUSANDS of test subjects. Did they have THOUSANDS of simultaneous hookups for consciousness rendering? Because one would think the program would have been shut down after ONE death.

If there’s a huge bounty on Cy-Baba and Kaypack admitted they made up Cy-Baba to cover up the Londes AI massacre, should Kaypack be liable somehow? Who exactly does he work for anyway?

Will Mel be back to repair the Bebop? It’s significantly worse for wear now. Was Jet’s daredevil run to Earth a subtle way to ensure that Mel and Faye get together again?

What questions are burning your brain? Do you think there will be fall-out for either or both of Spike and Faye’s adventures?

Did the Londes back itself up somewhere? Will it resurface again? And if shutting down the mainframe of Earth ended it, why in the world wasn’t it done the first time?

Chief of War: Justin Chon to Direct Jason Momoa in

The Nineties-era Spiky Updo Made A Comeback At The Grammys

New technique shows in detail where drug molecules hit their

Why We Must Protect Voting Rights

A driverless car that went rogue could be a taste

Is Bitcoin Legal in India or Not? Supreme Court Asks

The Best Pizza Ovens to Make the Perfect Slice