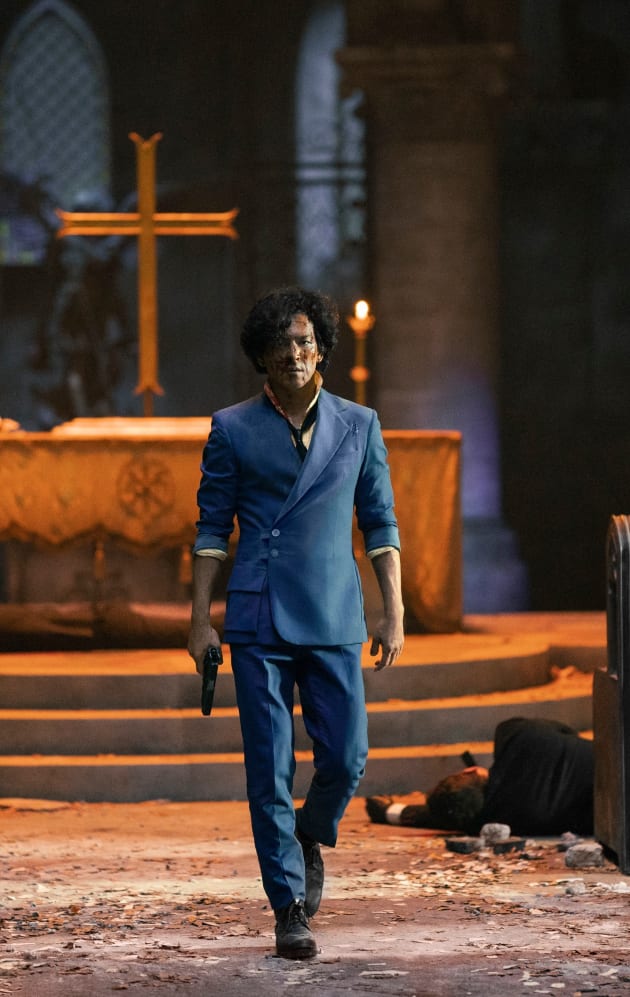 Finales are tricky, and finales of shows that are adapting well-loved canon are even more so. Cowboy Bebop Season 1 Episode 10 manages to surprise us with an original ending and delivers an outstanding final fight but lets us down on all other measures.

Modern-day series are designed for multiple seasons. The original Cowboy Bebop anime was not. People died (permanently) in the finale. Here, they did not.

Finales should have closure. As the credits roll, there are so many plot doors left swinging open, you’d think a hurricane had hit us.

In the plus column, the truth did out on multiple fronts.

Jet finally learned Spike’s secret. Of course, because Spike had sat on it so long, it came in the worst possible way.

(NB. It’s always a cheap trick to put a child in peril, but they telegraphed Jet’s Achilles Heel all season, so it shouldn’t be a surprise that Vicious had Kimmie kidnapped.)

It wouldn’t have prevented Kimmie’s kidnapping, but it occurs to me that the perfect time to come clean about his Syndicate connections was when Jet and Faye first burst into Ana’s club.

Ana had the opportunity to confess her part in the ambush that nearly killed Spike three years ago and explain how she got her limp.

It was obviously a weight of guilt she’d carried all that time.

Vicious was able to stretch his crazy wings fully. Classic villain posturing; he spent a LOT of time waxing poetic. Tip of the hat to the anime source material, once again.

When angels are forced out of Heaven, they become devils.

As a bonus, Faye found a kernel of a clue to her identity while searching for Spike at Earthworld. All good.

Faye’s surprise rescue from the church was a brilliant touch considering her aircraft was the one she liberated from Whitney’s storage locker on Cowboy Bebop Season 1 Episode 7.

And that got Kimmie out of the way while Fearless and Vicious tried to kill each other.

It’s a fantastic fight, by the way. There’s nothing to criticize for action, choreography, camera work, sound. It’s an apex fight scene in a season full of stellar battles.

The Julia twist is where things go a little nutty.

Well, to be fair, Julia’s more than a touch mad now too.

Her decision to take hold of the Syndicate’s power is such an about-face, it makes my head spin.

First, she offers to share the power with Spike. And when he declines, she shoots him, causing him to fall a LONG way into a body of water.

What the what now?

And then she takes Vicious home so she can play a daily game of Russian Roulette with his life.

(If you’ll recall from their first date on Cowboy Bebop Season 1 Episode 9, her first language is Russian.)

She tells Spike that he turned her into a monster by staying away all these years, but it looks like the credit really should go to Vicious.

There is nothing in this world to believe in. Least of all people. Even the people who are supposed to love you.

So, we’re left with Vicious alive but possibly not for long, and Julia acting on his behalf in the public sphere of the Syndicate. A Syndicate with no Elders and no capos.

The bridges are burned — incinerated, blasted beyond all recognition — with Jet. His promise to kill Spike if they ever meet again feels genuine.

Faye is gone to find out about her childhood home, and we have NO IDEA how that goes.

Spike survives because, of course, he does.

I knew you’d survive. That’s what cockroaches do.

And in the very final moments, Ein returns with Ed. ED! TEN HOURS into the series, and they bring Ed in for MINUTES! With no context, no explanation, no introduction.

It was a solid series until the finale. It was ambitious in scope and talented in execution.

Not everything worked, and some things worked better than they should’ve.

But the finale needs to bring it home. And this one got lost. Terribly, horribly lost.

Granted, they left lots of on-ramps for a subsequent season, and that was probably the plan all along.

I’d like to know what happens with Faye’s search for her past. What are the chances there are people still alive who knew her? Was it ever established why she was in cryo-sleep in the first place?

It would be nice to see if Jet can patch things up with Kimmie, or at least to know that she’s okay.

I honestly think I’ve had my fill of Spike’s drama for a while, but I suspect that if I want to see Ein and Ed(!) in action, Spike Spiegel will be part of the package. It is what it is.

I sincerely hope that Julia and the remnants of the Syndicate fall into the ocean, never to be heard from again.

And Chalmers needs a haircut. Please.

Now, it’s your turn to sound off. What did you love? What did you hate? How much meh is hanging in the middle?

Would you be on board for another season? How do you see that playing out?

Who should return? Which omitted characters should make an appearance?

The comments section is your oyster! Fill it with pearls!

Until next time, we’ll see you, space cowboy.