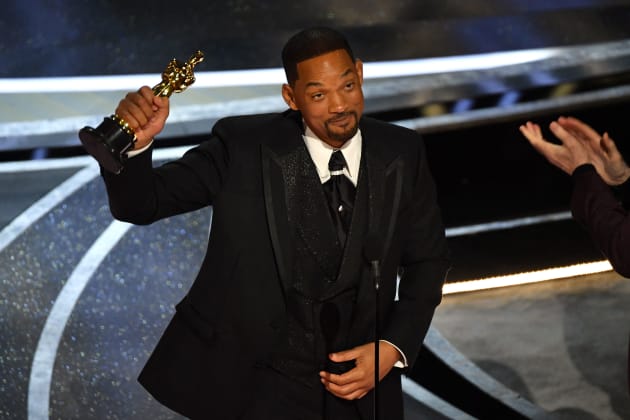 Chris Rock is speaking out after Will Smith slapped him during Sunday’s Oscars ceremony.

Rock performed at a standup show in Boston Wednesday night and addressed the elephant in the room, according to Variety.

“How was your weekend?” he said, adding:

“I don’t have a bunch of s–t about what happened, so if you came to hear that, I have a whole show I wrote before this weekend.”

“So, at some point I’ll talk about that s–t. And it will be serious and funny.”

Indeed, the star is still trying to comprehend what played out during the telecast, much like the rest of the world.

If you’ve somehow been living under a rock, we’ll give you a refresher.

Rock was presenting an award during the ceremony on Sunday and cracked a joke about Jada Pinkett Smith being in G.I. Jane 2.

Pinkett Smith had previously opened up about having a hair-loss condition called alopecia.

Will laughed at the joke initially, but you could tell Jada was unimpressed about Rock making a joke about her appearance.

In one of the most shocking scenes in TV history, Will made his way to the stage and smacked Rock.

“Wow, Will Smith just smacked the s–t out of me,” Rock said in response to the incident.

“Keep my wife’s name out your f–king mouth,” Will shot back, before later accepting the Best Actor award.

Smith apologized the next day on social media.

“My behavior at last night’s Academy Awards was unacceptable and inexcusable,” he said on Instagram.

“Jokes at my expense are a part of the job, but a joke about Jada’s medical condition was too much for me to bear and I reacted emotionally.”

“I would like to publicly apologize to you, Chris. I was out of line and I was wrong.”

“I am embarrassed and my actions were not indicative of the man I want to be. There is no place for violence in a world of love and kindness.”

A new message revealed by the Academy of Motion Picture Arts and Sciences Tuesday claimed that Will was asked to leave the ceremony but refused.

“Things unfolded in a way we could not have anticipated,” this new message reads.

“While we would like to clarify that Mr. Smith was asked to leave the ceremony and refused, we also recognize we could have handled the situation differently.”

It also sounds like Will could be losing his award in the near future.

“The Board of Governors today initiated disciplinary proceedings against Mr. Smith for violations of the Academy’s Standards of Conduct, including inappropriate physical contact, abusive or threatening behavior, and compromising the integrity of the Academy.”

“Consistent with the Academy’s Standards of Conduct, as well as California law, Mr. Smith is being provided at least 15 days’ notice of a vote regarding his violations and sanctions, and the opportunity to be heard beforehand by means of a written response.”

Oscars co-host Amy Schumer also reacted to the news, saying she was “traumatized” following the incident.